Duke Box #51: Our Guide to the Best Films on TV 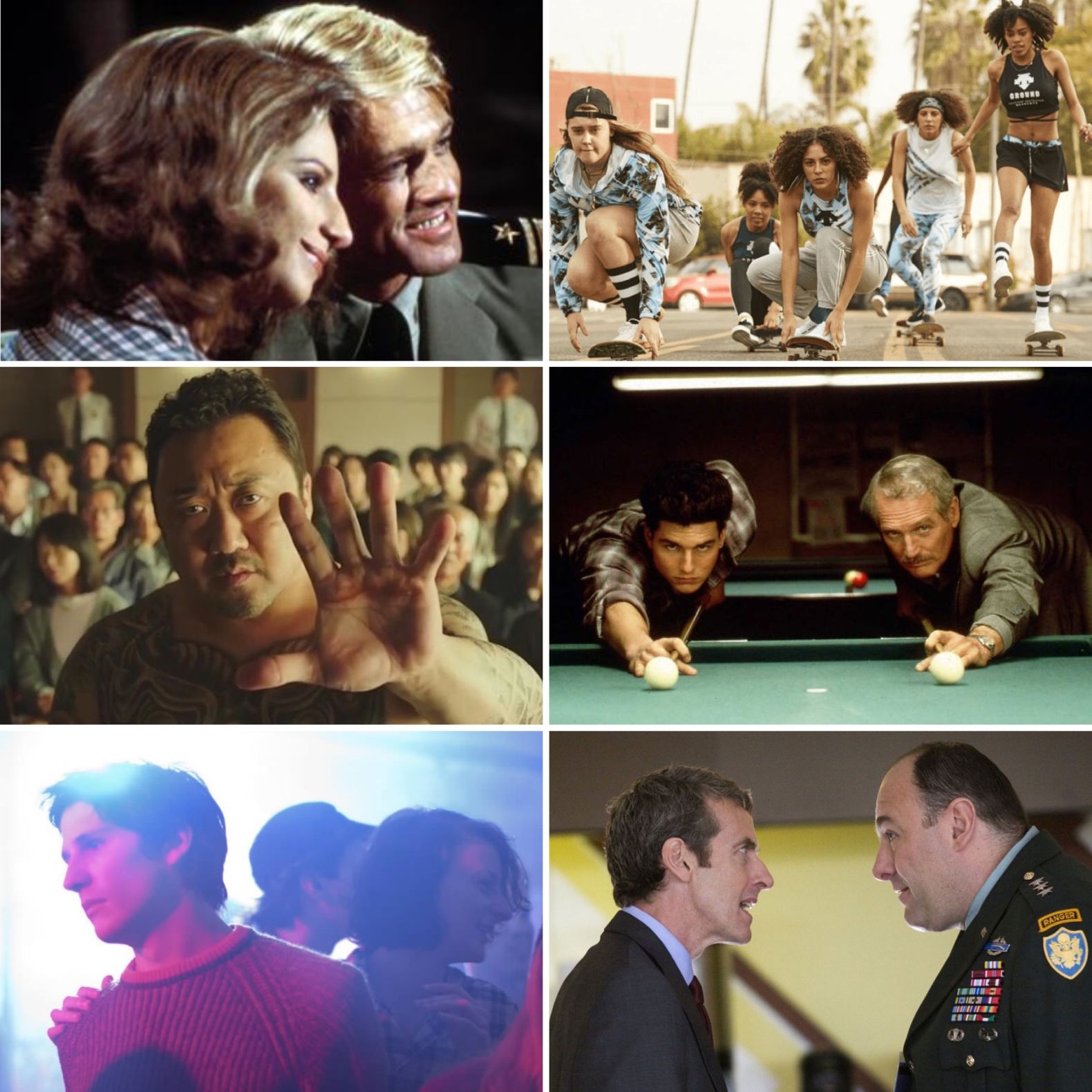 Fascinating documentaries, American indies and world cinema triumphs, Newman and Redford (saly not together), Malcolm Tucker's inventive lexicon...it's all here in Duke Box 51. Our pick of the week though goes to Mia Hansen-Løve’s atmospheric and evocative Eden – and not just because it features a healthy dose of Daft Punk.

Michael Caine makes his first appearance as spy Harry Palmer in espionage thriller The Ipcress File, regarded as the antithesis of Bond’s excessiveness. It’s also quite the contrast to the fantasy-tinged escapades of the afternoon, including the camp delights of Practical Magic (Bullock and Kidman as witch sisters, Stevie Nicks on the soundtrack), Jim Henson’s family favourite Labyrinth (dance magic dance with David Bowie’s wicked Goblin King) and The Hobbit: An Unexpected Journey, the first instalment of Peter Jackson’s Middle Earth adventure, uniting a lot of Lord of the Rings favourites with Martin Freeman’s Bilbo Baggins. There’s another reunion of sorts elsewhere, as The Color of Money sees the always-charming Paul Newman return as pool hustler ‘Fast Eddie’ Nelson, a role he made famous in The Hustler. This time round he’s directed by Martin Scorsese, co-starring alongside a young Tom Cruise as the showy upstart he takes under his wing and inevitably clashes with. Newman was Oscar-nominated for The Hustler; he won for The Color of the Money. The evening also sees Danny Boyle’s The Beach, an ambitious, flawed adaptation of Alex Garland’s novel that’s interesting to revisit, if only for the stunning locations and intriguing casting. There’s a double dose of activism-inspired cinema in the evening, with Susan Sarandon on Oscar-winning form in true-life story Dead Man Walking as Sister Helen Prejean, a nun whose meetings with a man on death row (Sean Penn) lead to a complex examination of good, evil and morality, and a look at the music/grassroots Rock Against Racism movement of the 1970s in documentary White Riot. There’s more Penn in Alejandro González Iñárritu’s stylish, moving crime drama 21 Grams, starring alongside Naomi Watts and Benicio del Toro in the story of three characters whose lives intersect after a car accident, while J.C. Chandor’s Margin Call is a tightly wrought, claustrophobic examination of Wall Street on the night the financial markets crashed in 2008, while Alejandro González Iñárritu

Laika studios excel at making gorgeous stop-motion animation that’s entertaining for all ages and The Boxtrolls is no exception, with its story of an orphan and his eccentric underground friends a joy for children and big kids at heart. There’s a D-Day epic in The Longest Day, starring John Wayne, Henry Fonda and Richard Burton, before, forgive me, a double-bill on C5 that has me screaming back to the 90s’ penchant for corny, faintly traumatic and ridiculous disaster movies. Linda Hamilton and Pierce Brosnan try to outrun a volcano explosion in Dante’s Peak, before Helen Hunt and Bill Paxton find themselves caught in the middle of a Twister. The Coen Brothers x Nic Cage = our film programmer’s dream combination, to be honest, as eccentric screwball comedy Raising Arizona follows an ex-con and ex-cop (Holly Hunter) husband and wife who, after learning they can’t conceive, kidnap one of the quintuplets of a furniture tycoon. There’s another odd couple set-up in the Korean thriller The Gangster, The Cop, The Devil, as Train to Busan scene-stealer Ma Dong-seok stars as a crime boss who teams up with a cop to bring down a serial killer, while The Thick of It’s legendary Malcolm Tucker (Peter Capaldi) finds himself up against James Gandolfini’s formidable US general in Armando Iannucci’s wickedly funny satire In the Loop. Finally, Carol Morley directs Zawe Ashton in a fictionalised study of Joyce Vincent, a woman who died alone in her bedsit and wasn’t discovered for three years. It’s a unique portrait of Joyce, London, contemporary living and how people mean different things to different people.

There’s a wonderful collection of black and white gems from the ‘40s and ‘50s to enjoy throughout the day - from David Lean’s aviation drama The Sound Barrier, written by Terence Rattigan, and sci-fi, B-movie gem The Incredible Shrinking Man (featuring fantastic fun sets and camera trickery), to Orson Welles’ film-noir The Stranger, where he stars as a post-WWII, America-dwelling Nazi trying to avoid detection, and British gangster film and Graham Greene adaptation Brighton Rock, starring Richard Attenborough as the violent crook Pinkie Brown. Real life inspiration and racial inequality lie at the heart of a double bill on Film 4 in the evening, with period drama Belle followed by the wonderful Hidden Figures. Gugu Mbatha-Raw shines in the former as a biracial aristocrat in 18th century Britain, while the latter sees Taraji P. Henson, Octavia Spencer and Janelle Monae star as three women who intelligence and skill proved pivotal in the early years of NASA’s space program, despite the prejudice they faced at work. There are some epic romances too, with Barbra Streisand and Robert Redford as a couple whose love must contend with ideological differences in Sydney Pollack’s The Way We Were, and Julie Christie and Alan Bates as forbidden lovers embarking on a torrid affair in The Go-Between, adapted from L.B. Hartley’s book by Harold Pinter. Fans of The Matrix can test out the sequel if they like (the third part in the series is on later in the week too), while the final pick of the day is American indie gem Skate Kitchen, a beguiling, beautifully shot coming-of-age story about a lonely surburban teen whose life changes when she befriends some girl skateboarders in the city.

I’ll be completely honest – I don’t particularly think that Ridley Scott’s strange, chaotic fairytale Legend is necessarily a good film. It does, however, feature stunning designs, a young Tom Cruise and, the true pull, a delightfully scenery-chewing performance from an unrecognisable Tim Curry as the villainous, devilish Lord of Darkness. There are other wonderful effects on display in reboot sequel Dawn of the Planet of the Apes, featuring another quite remarkable performance from Andy Serkis as leader Caesar. An alternative option at 9pm is the quite fascinating documentary The Painter & the Thief about an artist who formed a close bond with the man who stole her artwork, before late night/early hour screenings of Straight Outta Compton, the (slightly softened but still worth watching) story of revolutionary Compton hip-hop band N.W.A, and Peter Mullan’s critically-acclaimed Neds, a tough coming-of-age drama about a lad growing up in 1970s’ Glasgow.

Quite the eclectic trio to keep an eye out for today. There are a couple of play adaptations up for viewing, beginning with William Wyler’s film noir Detective Story, which follows one day in the squad room of a police precinct, zeroing in on a hard-nosed detective (Kirk Douglas) and his pursuit of one particular criminal. Then later on Denzel Washington gets in front and behind the camera to present Fences, starring alongside an Oscar-winning Viola Davis in the story of a working-class family’s patriarch struggling with the events of his life. Elsewhere, there’s a chance to Mia Hansen-Løve’s stunning Eden – the story of a teenager in early-nineties Paris who revels in the nightlife of sex, drugs and music. It’s both a love letter to music and subcultures, while its pounding beats belie a tender exploration of growing up and going after your dreams. Hopefully it appears again on All4 or at a kinder time.

Virginia McKenna stars as real-life spy hero Violette Szabo in Carve Her Name with Pride, a film that slightly sanitises some of the brutality that Szabo faced on her missions (it is rated U after all), but nevertheless tells a vital story of a woman who risked everything to help fight the Nazis. Meanwhile, stylish and gritty British neo-noir thriller Hyena about a corrupt police officer who has to try and shut down a crime ring before his own misdeeds are discovered.

It’s a good chance to catch up films you might have missed out on earlier in the week, as well as the opportunity to take in a few more treats from the mid-20h century. If it’s a thriller you’re after, I See a Dark Stranger sees Deborah Kerr star opposite Brief Encounter’s Trevor Howard as an Irish woman recruited to spy for the Nazis, while, in the evening, there’s The October Man, starring John Mills as a man suspected of murder and unable to trust his own recollections. In between the two, David Lean and Noel Coward combine for Blithe Spirit, about a husband his new bride who are haunted by the spirit of his first wife, and Humphrey Bogart delivers one of his finest performances as a U.S. Naval captain whose mental instability threatens the security of his vessel in The Caine Mutiny.