Duke Box #5: Our Guide to the Best Films on TV 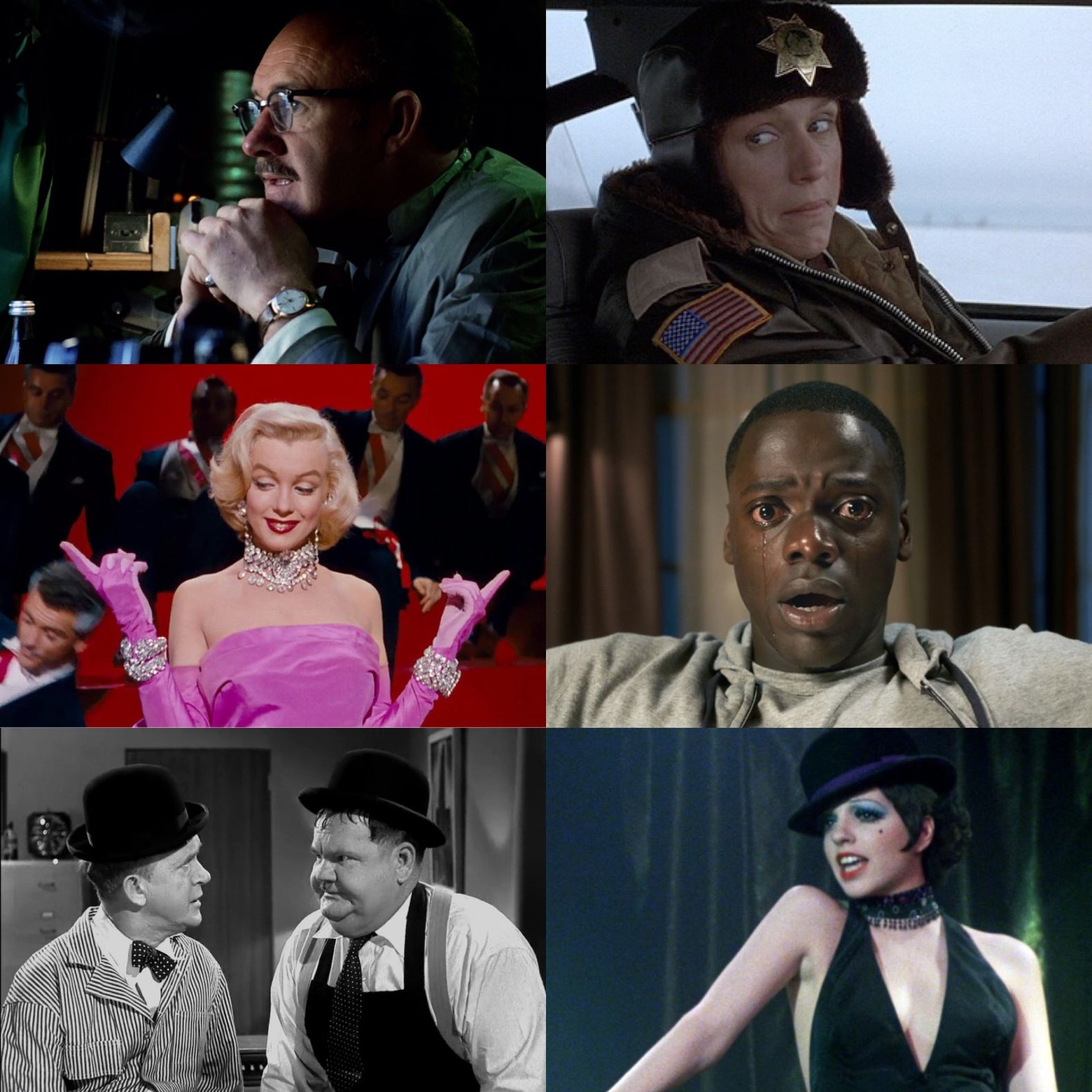 There's still a great deal to choose from this week on Freeview TV, including some real cinema landmarks, classics and legendary celluloid moments.

In fact, the week is so full of greatness that it's made narrowing down to a Pick of the Week incredibly difficult. I'll go with Midnight Run...no, wait, Fargo, definitely Fargo...but then there's The Conversation...

Anyway, check out the list and let us know what you're looking forward to watching!

Stay safe, stay inside and put on a good film.

(A reminder that this list isn’t exhaustive and that some films will be repeated at different times – these are just some key titles to look out for at what are likely the best times. Some films may also change if channels decide to alter their listings - a fun thing for me!)

*A reminder of today's choices* Friday 17:

Both Bridge to Terabithia and Swallows and Amazons are charming stories of children looking for and creating their own adventure, whether that’s the fantasy land that the young heroes create in the former, to the gorgeous waters of our nearby Lake District. Tom Hanks won his first Oscar for his role in Philadelphia, a powerful drama about a man living with AIDS who is fired by his company. Directed by Jonathan Demme (The Silence of the Lambs) and co-starring Denzel Washington, it’s still a powerful feature on prejudice and ignorance.In the evening, there’s the excellent True Grit – the Coen brothers’ take on the classic western, featuring a wonderful Jeff Bridges (stepping into John Wayne’s shoes), Matt Damon and a breakthrough performance from Hailee Steinfeld. The unusual Swedish Border combines everything from fantasy and Scandi-noir, to social realism and touching romance – it’s likely like nothing else you’ll have seen so far this year. Indie crime thriller Cold in July crackles with suspense, twists, revenge and a sublime cast, with Don Johnson as pick of the bunch. Late night slot: likely to be on catch-up, but Ben Wheatley’s black-comedy Sightseers, starring Steve Oram and Alice Lowe as homicidal holidaymakers in the British countryside, is a real Dukes favourite.

It’s a musical classic double-bill on C5 with a repeated showing of Chitty Chitty Bang Bang and the Dickens adaptation Oliver!, whilst the evening features a couple of excellent films fixated on spying and surveillance, in John le Carre adaptation The Spy Who Came in from the Cold and Francis Ford Coppola’s The Conversation. Finally, there are two brilliant based-on-real-people performances to round out the day, from Leonardo DiCaprio as shady stockbroker Jordan Belmont in Martin Scorsese’s The Wolf of Wall Street, to acting chameleon Michael Sheen’s turn as football’s Brian Clough in The Damned United.

There’s a real array of classics on Sunday, from the hijinks of Laurel & Hardy in The Big Noise and the joyful comedy of Danny Kaye in The Court Jester, to disaster-movie The Towering Inferno, swords-and-sandals epic Jason and the Argonauts and WWII drama Where Eagles Dare, starring Richard Burton and Clint Eastwood. The afternoon also sees some light, fun, escapist entertainment in Twister (I love it, ok), The Lego Batman Movie and Grease. Then there are two bonafide slices of brilliance in the evening, with The Coen Brothers’ Fargo (you betcha!) and The Deer Hunter, starring Robert DeNiro, Christopher Walken, Meryl Streep and John Cazale. Northern Soul drops into the late, late night slot on C4 so it should pop up on All4 afterwards.

(There’s also another chance to see The Bridge on the River Kwai, this time on C5 at 12.25pm.)

Sony Classic drop a spectacular Marlon Brando double-bill in the middle of the day with outlaw biker crime drama The Wild One and longshore corruption drama On the Waterfront (“I coulda had class. I coulda been a contender. I could’ve been somebody.”) From one boxer to another, the 10pm film Rocky also has its fair share of iconic moments. Bonus: the rest of the Rocky series is on at 9pm for the rest of the week (though sadly not the Creed films by the looks of it). The Horror Channel also has a couple of greats on back-to-back: Peter Jackson’s horror-comedy The Frighteners, featuring a fantastic Michael J. Fox (and horror legend Dee Wallace) as a man who has the ability to talk to ghosts, and Sam Raimi’s cult classic, The Evil Dead – the quintessential cabin in the woods movie.

Maureen O’Hara stars in 40% of today’s picks, appearing alongside Alec Guinness in satirical spy comedy Our Man in Havana, a Graham Greene adaptation directed by The Third Man and Oliver! director Carol Reed (and co-starring Noel Coward!), and featuring in an early career-role in Hitchcock’s first Daphne du Maurier adaptation, Jamaica Inn. There’s also the best Rocky film (I said what I said) on in the evening, as well as the underrated thriller Eye in the Sky, starring Helen Mirren and the last on-screen appearance of the great Alan Rickman, and fun monster b-movie Tremors.

Film 4 are really going all out with their film choices during lockdown this week, finding some gorgeous technicolor gems and shining silver-screen pairings. Case in point: Houseboat, starring Cary Grant and Sophia Loren, and Douglas Sirk’s visually spectacular melodrama All That Heaven Allows, featuring an (at the time) daring and unconventional romance. There’s more great casting in skydiving film The Gypsy Moths, which I can’t admit to having seen but I’ll certainly check out any film that contains Deborah Kerr, Burt Lancaster, Gene Hackman, Scott Wilson and Bonnie Bedelia and is about skydiving. Rocky III might not be as knockout as the first two, but it's still got some bounce in its step (and that Survivor theme song). Finally there’s a real gem in Midnight Run, a comedy-crime film starring Robert DeNiro & Charles Grodin (one of the best on-screen double acts) as a respective bounty hunter and a bail-jumping accountant, and the trippy British psychological thriller Kaleidoscope, starring Toby Jones and Anne Reid.

There’s another chance today to see The Court Jester (Talking Pictures TV, 3.25pm) if you miss it on Saturday and A Man For All Seasons (Sony Classic, 1pm), from our first blog of recommendations.

Take your pick from Nicholas Ray’s rich noir On Dangerous Ground, starring Ida Lupino (who’s rumoured to have stepped in to help direct when Ray fell ill) and John Huston’s Heaven Knows, Mr Allison, starring Deborah Kerr and Robert Mitchum as a nun and officer trapped on a occupied-island in the Pacific during WWII. It's Stallone vs Lundgren in Rocky IV, which is ridiculous, entertaining and emotional all at the same time. Life’s a Cabaret in the evening with the classic Bob Fosse musical, starring an Oscar-winning Liza Minnelli, whilst slipping into a late night slot – but surely destined for catch-up on iPlayer – is documentary Hollywood’s Brightest Bombshell: The Hedy Lemarr Story. It’s a fascinating look at one of the silver screen’s most intriguing stars whose intelligence might well have reshaped the whole world.

Film 4 continue their run of sumptuous golden oldies with Gentlemen Prefer Blondes, starring Marilyn Monroe in scintillating, iconic form. Elsewhere, Sony Movies Classic deliver multi-Oscar-winner (7!) The Best Years of our Lives, a tender story of three servicemen trying to readjust to civilian life after WWII, and a Humphrey Bogart film noir in Dead Reckoning. Jordan Peele’s smash-hit horror-satire Get Out, Ken Russell’s D.H. Lawrence adaptation Women in Love (starring Oliver Reed, Alan Bates and Glenda Jackson), and M. Night Shyamalan’s twisty Unbreakable, an alternate take on a superhero film, are all on at 9pm (as is the underwhelming Rocky V, but we know I'm a completist and it's handy build-up for the moving Rocky Balboa on Saturday), before a bit of late night cringe with Alan Partridge: Alpha Papa. Best use of Roachford’s ‘Cuddly Toy’ in a film ever.