Duke Box #49: Our Guide to the Best Films on TV 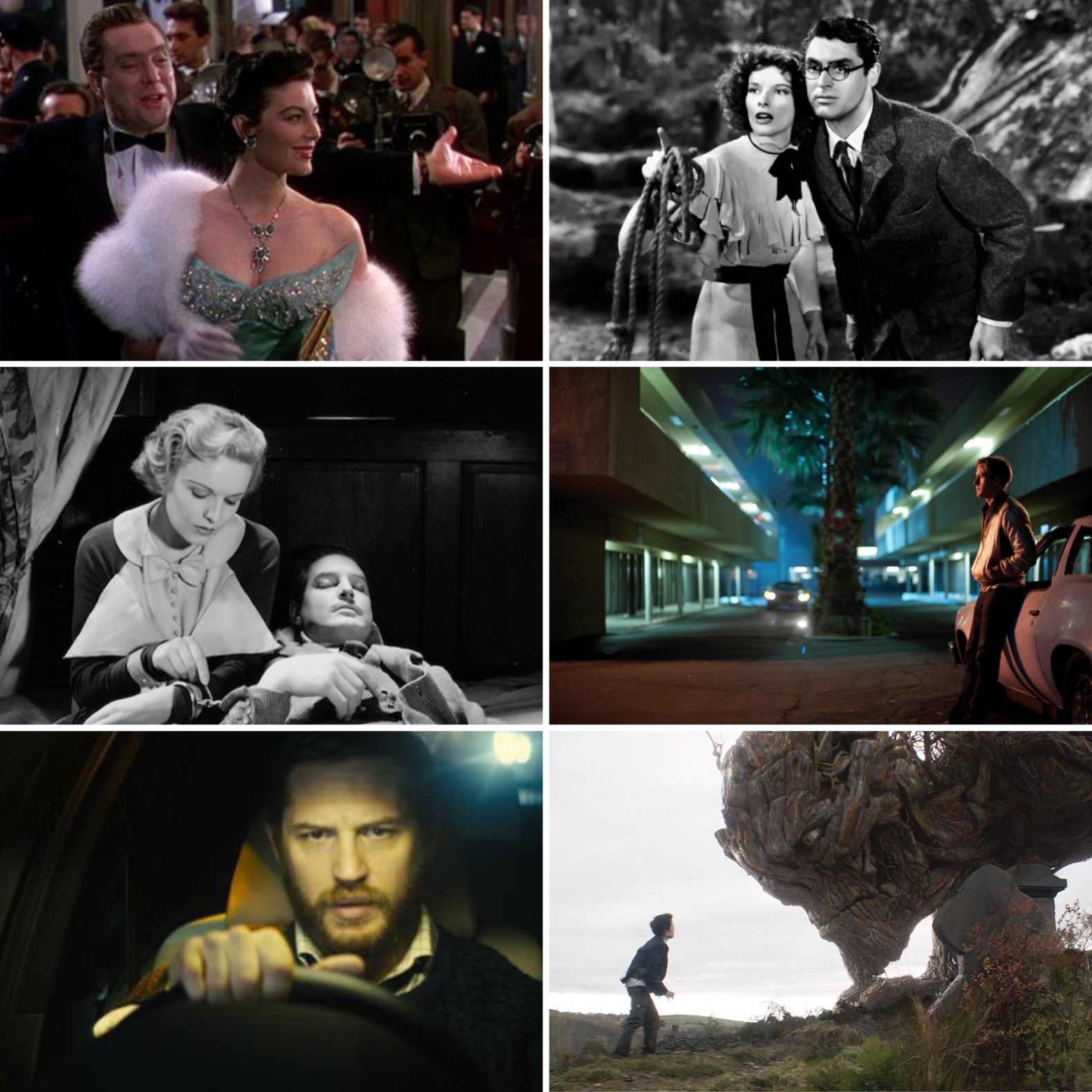 This week is peppered with classical silver screen offerings, including three Hitchcock films up for viewing and appearances from Cary Grant, Katharine Hepburn, Ava Gardner, Humphrey Bogart, Joan Fontaine, Ingrid Bergman and more throughout the week. Keep an eye out as well for some bold and beautiful filmmaking and directorial flair, coming at you in all shapes and sizes.

NB: Head back in a couple of days for Friday's listings - we promise they'll be up!

Fans of family fare can dive into the bright whimsy and heart of Dr Seuss’ Horton Hears a Who! or jettison off an adventure to another dimension with George Clooney and Hugh Laurie in Tomorrowland: A World Beyond (inspired by Disney’s futuristic themed land in its theme parks), while some beloved Aardman and Paddington escapades can be found in the repeats. Those two sit either side of Hitchcock’s masterful spy mystery The 39 Steps, a thrilling, twisty, turny film about a civilian caught up in attempted espionage. There are more thundering spy games at play in the evening, with Ethan Hunt (Tom Cruise) and his team in a race against time after a mission calamity in Mission: Impossible – Fallout (which also sees Henry Cavill, Angela Bassett and Vanessa Kirby join the huge cast) and Pierce Brosnan’s Bond teaming up with Michelle Yeoh to take down Jonathan Pryce’s media mogul in Tomorrow Never Dies. Those aren’t the only impressive ensembles on show, as Chris Pine, Zachary Quinto, Sean Pegg, Zoe Saldana, Karl Urban, John Cho and Anton Yelchin all step aboard the USS Enterprise in J.J. Abrams’ fun revamp of Star Trek, and a brilliant Emily Blunt leads Josh Brolin, Benicio Del Toro, Daniel Kaluuya and more in Denis Villaneuve’s stylish, visceral and nerve-shredding crime-action-thriller Sicario, which sees a young FBI agent assigned to a task force taking on the war on drugs. Elsewhere in the evening, Humphrey Bogart and Ava Gardner star respectively as a washed-up filmmaker and a rising film star in Joseph L. Mankiewicz’s beautifully shot crime drama The Barefoot Contessa, Julie Walters gives a career-making, BAFTA-winning performance as a Liverpudlian, working-class hairdresser tutored by Michael Caine’s alcoholic academic in Willy Russell’s Educating Rita and Jake Gyllenhaal adds another excellent performance to his collection in Stronger, the inspiring and often quite frank story of 2013 Boston Marathon bombing survivor Jeff Bauman screening.  And for goth-music lovers, Sky Arts are showing The Cure: Live in Hyde Park on at 9pm, which we screened back in 2019 – one year after the gig itself and the same summer as their hit Glastonbury set.

There’s back-to-back Hitchcock this Sunday with a great double-bill from the Master of Suspense on BBC2 in the afternoon. One of the filmmaker’s final British films, stylish mystery The Lady Vanishes stars Margaret Lockwood as a traveller convinced that another passenger has disappeared, only for her companions to deny she ever existed, while Suspicion sees Joan Fontaine’s young bride fearful of what her charming husband (Cary Grant) might do to claim her inheritance. Fontaine picked up Best Actress for Suspicion – the only Oscar-winning performance in a Hitchcock film – and she’s on form again in Robert Stevenson’s take on Charlotte Bronte’s Jane Eyre, starring as the titular figure alongside Orson Welles’ brooding Mr Rochester. A boy goes on an odyssey in search of his lost dog in Wes Anderson’s whimsical stop-motion animation Isle of Dogs at teatime, while the evening brings a late-night screening of J.A. Bayona’s captivating A Monster Calls, a film that deftly blends startling fantasy and real-life trauma in its story of a young boy who’s visited by a tree monster as he tries to cope with his mother’s terminal illness. After midnight, there’s a chance to see rising British filmmaking talent, with Daniel Wolfe’s Catch Me Daddy, a stylish and intense thriller about a young girl on the run from her family with her drifter boyfriend.

Cary Grant and Katharine Hepburn sparkle as a palaeontologist and eccentric heiress caught up in all sorts of escapades in screwball comedy classic Bringing Up Baby – which, despite being a bit of a Box Office flop, has gone to be one of the most definitive and influential films of its kind. This week’s Storyville doc follows a young, troubled Peruvian teen whose discovery of a broken surfboard on a beach leads him to dream of becoming a pro-surfer, battling tough circumstances on the way. Finally, tender and powerful French drama Amanda tells a tale of grief as it follows a young man who finds himself as guardian for his young niece after a brutal attack kills his sister.

Between Good-Time Girl, Tora! Tora! Tora! and the repeats, there are quite a few films on in and around lunchtime. The former follows a young girl in post-war England who finds herself entangled in a world of crime and on the run, while the latter is a hard-hitting, epic collaboration between Japanese and American filmmakers that insightfully recreates the events leading up to and including Pearl Harbour. Then in the evening there’s a Danny Boyle/Ewan McGregor double-bill, beginning with the darkly-humoured thriller Shallow Grave, about three flatmates who find their lodger dead next to a pile of cash. It’s followed by the pounding adaptation of Irvine Welsh’s Trainspotting, a brutal, blackly comic, and often horrifying depiction of drug addiction complete with an iconic soundtrack and memorable characters.

The lives of men pull focus in today's picks, from the story of a young RAF pilot's life through WWII in the impressive, Terrence Rattigan-penned The Way to the Stars, through to Peter O'Toole's final Oscar-nominated performance in Venus as a veteran actor who bonds with his old pal's great grand-niece (a sparkling Jodie Whittaker). Ryan Gosling appears in between as a not-so-talkative stuntman and mechanic who moonlights as a getaway driver in Nicolas Winding Refn's stylish neo-noir Drive, which wears its homages on its sleeve and contains the perfect soundtrack. Elsewhere, Alan Bates stars in kitchen-sink drama A Kind of Loving as a draughtsman who finds himself married after his typist girlfriend falls pregnant, leading to a clash with his new way of living.

There are some wonderful performances on display today, including Ingrid Bergman’s Oscar-winning turn in Anastasia as a young, destitute woman coached by Yul Brynner’s Russian exile to be the Grand Duchess. As well as another chance to see Julie Walters and Michael Caine shine in Educating Rita, the evening brings with it Jack Nicholson as a journalist who takes a risk by assuming a dead businessman’s identity in Michelangelo Antonioni’s The Passenger and Tom Hardy as a construction manager who finds his life slowly unravelling via a series of phone calls during a motorway drive in Stephen Knight’s Locke. It’s a magnetic performance from the British actor, who is the only person who appears on screen – but keep an ear out for the voice talents of Olivia Colman, Ruth Wilson, Andrew Scott and more.

It’s a day of tension and thrills, beginning with a mid-morning screen of Carol Reed’s Odd Man Out – the first ever winner of the BAFTA for Best British Film. A career-making role for James Mason, it follows the wounded leader of an Irish organisation trying to evade the police throughout Belfast. There’s a choice between Rob Reiner’s starry legal drama A Few Good Men, starring Tom Cruise, Jack Nicholson, Demi Moore and Kevin Bacon, and sci-fi-satire-thriller Upgrade, directed by Leigh Whannell (The Invisible Man) at 9pm. The former, featuring one of the most infamous cinema court scenes, follows a military lawyer tasked with defending marines accused of murder, while the latter, mixing B-movie vibes, dark humour and grimy tension, sees a technophobe (Logan Marshall-Green) agree to an implanted chip after a vicious attack leaves him paralyzed. Finally, Steven Spielberg’s Empire of the Sun sees a very young Christian Bale shine as an affluent British boy in Shanghai who’s separated from his family and placed in a Japanese internment camp during WWII. Co-starring John Malkovich and Miranda Richardson, it’s a striking adaptation of J.G. Ballard’s semi-autobiographical novel.