Duke Box #48: Our Guide to the Best Films on TV 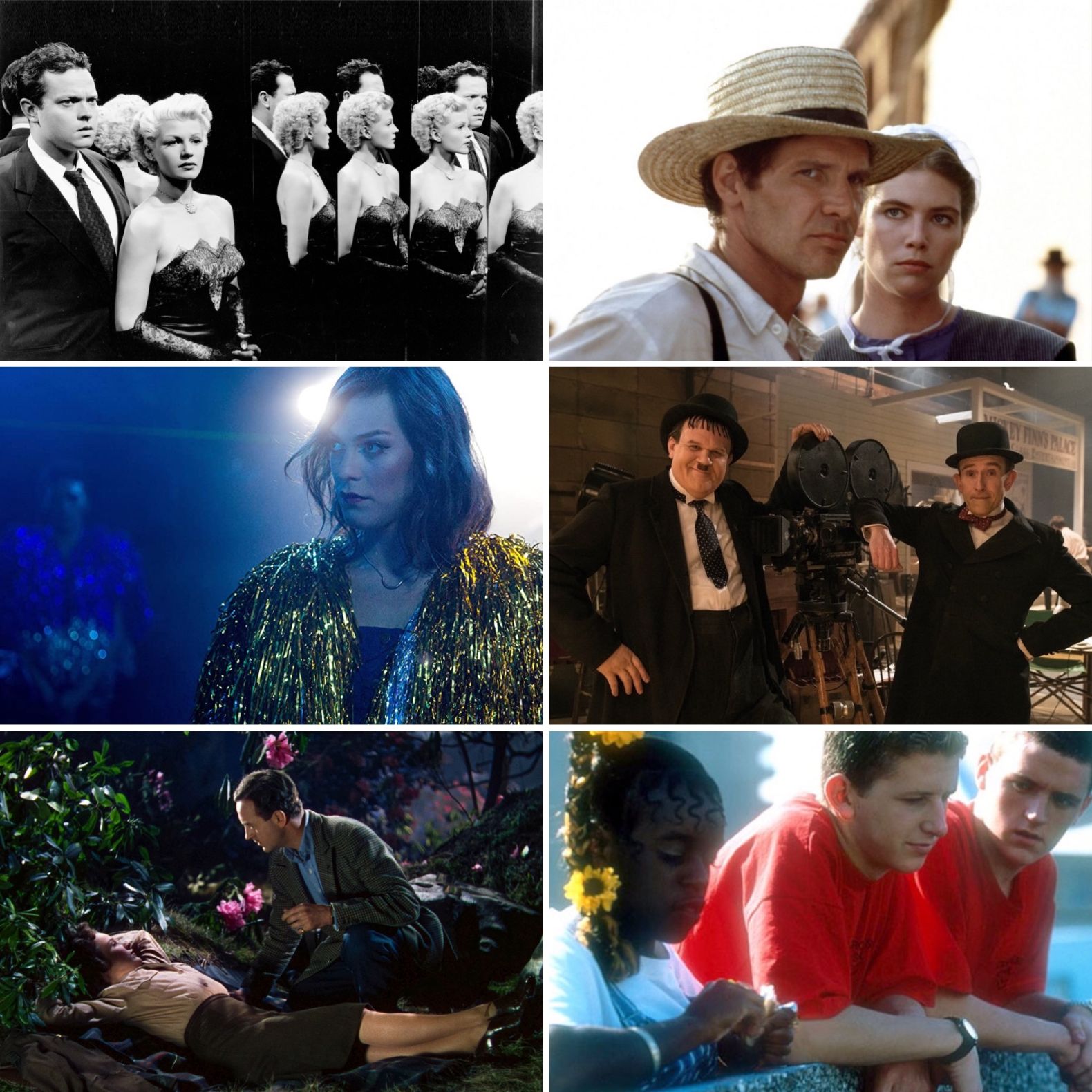 What's great about this week's Duke Box is that there are a lot of wonderful, striking examples of why we love and enjoy cinema: The Lady from Shanghai's stunning set-pieces, the beautiful romance and imagination of Powell & Pressburger's A Matter of Life and Death, the cinematography of Peter Weir's Witness, Daniele Vega's performance and Sebastián Lelio's bold vision in A Fantastic Woman, the joy and heart of Love, Simon and We Are the Best!, the ode to cinema history in Stan & Ollie...I hope there's something for you to enjoy too.

A modern-day twist on Cyrano de Bergerac starring Steve Martin might not sound like it should work but Roxanne is a charming romantic comedy that’s a sweet showcase for its leading man and co-star Daryl Hannah. Elsewhere in the afternoon, Charlton Heston, Joan Hackett, Donald Pleasance and Bruce Dern star in Western Will Penny, a deglamorised depiction of life in the West that Heston considered his favourite of the work he did. A truly fantastic remarkable ensemble lie at the heart of Michael Cimino’s provocative The Deer Hunter, with Robert De Niro, Christopher Walken, Meryl Streep and the late, great John Cazale committing some of their finest performances to celluloid in a story of how the Vietnam War effects a group of friends in a Pennsylvania industrial town. If you’re in the mood for horror, there’s a trio that takes in a few takes on the genre. Kevin Bacon, Fred Ward and a smalltown take on some giant monsters in fun creature feature Tremors, Clive Barker’s cult Brit horror Hellraiser throws puzzle bites, alternate dimensions, Cenobites and some sadism at the screen, and Peter Cushing misguidedly steals the skull of the Marquis de Sade in Amicus production The Skull. There are more genre quirks in the evening too, with Renee Zellweger and Catherine Zeta Jones leading the merry murderesses of the Cook County Jail in Best Picture winning musical Chicago, the parallel lives of one woman whose love life and career hinge on her catching a train in the smart, lovely rom-com Sliding Doors and some gritty film noir in William Wyler’s The Desperate Hours, starring Humphrey Bogart as the leader of three fugitives who hold a family hostage. And, sandwiched in among all of this, there are first outings for Pierce Brosnan’s Bond, Samantha Bond’s Moneypenny and Judi Dench’s M in Goldeneye.

It wouldn’t quite be Valentine’s Day without some romance on TV. The stand out is the stunning A Matter of Life and Death, Powell & Pressburger’s beautiful, thoughtful and inventive film about a WWII airman (David Niven) who finds love just as he cheats death, causing him to argue before a celestial court for his life to continue. Elsewhere, Helena Bonham Carter finds herself torn between her summer romance in Florence and her fiancée in England in the sumptuous Merchant Ivory E.M. Forster adaptation A Room with a View, the lovely, inclusive coming-of-age film Love, Simon follows an American teen hiding his sexuality who falls for an anonymous classmate online, and Richard Gere’s US Navy Aviation Officer candidate falls for a local girl (Debra Winger) in romantic drama An Officer and a Gentleman. (There’s also Dirty Dancing and Pretty Woman cropping up in the repeats.)

There are of course other genres up for viewing too, including a trio of family films: the sweetly nostalgic Snoopy and Charlie Brown: The Peanuts Movie, Aardman’s delightful Chicken Run and Pixar prequel Monsters University. They’re bookended by a midday screening of Ealing comedy Passport to Plimico, about a part of London that declares itself independent, and Sink the Bismarck!, a considered account of a the infamous WWII incident, shot with a docudrama style feel. Josh Brolin, Miles Teller and Jeff Bridges star in Only the Brave just before midnight, a powerful tribute to an elite crew of firefighters who took on a historic wildfire, while A Fantastic Woman is a striking Chilean drama from Sebastián Lelio (Gloria Bell, Disobedience) about a young transgender woman (the fantastic Daniele Vega) whose life begins to fall apart after her partner dies. Visually spectacular, it’s a real gem.

Today is occupied by variations of violence, beginning with a formidable combination of Jack Palance and Lee Marvin in a midday screening of Robert Aldrich’s Attack! – a story of a cowardly US captain out of his depth and the men who want him removed from post. There’s tense horror in the evening with The Quiet Place, which sees Emily Blunt and John Krakowski try and protect their children from ravenous monsters who prey on sound, while Al Pacino is an ex-con struggling to keep out of drugs and crime in Brian de Palma’s stylish thriller Carlito’s Way. Elsewhere, there’s a fascinating Storyville documentary on BBC4, as Whirlybird: Live Above L.A. uses video archive to chart one couple’s revolutionary, brazen helicopter reporting in the ‘80s and ‘90s – a turbulent time for the City of Angels.

From one 1955 film to another on Film 4 during the day, as the fantastic ensemble of Glenn Ford, Barbara Stanwyck, Edward G. Robinson and Brian Keith in bitter, psychological land dispute western The Violent Men is followed by Otto Preminger’s The Court-Martial of Billy Mitchell, a true story of a U.S Colonel and WWI vet (Gary Cooper) who publicly accused his superiors of fatal ineptitude. There’s some cult Hammer Horror goodness courtesy of some ancient remains in the London Underground in Quartermass and the Pit, while Penny Marshall’s real-life inspired Awakenings sees a physician (Robin Williams) offer a new lease of life to a group of catatonic patients (including Robert De Niro) at a 1960s Bronx hospital. Stunningly shot documentary The Last Igloo follows one man living the traditional Inuit way of life in the beautiful arctic wilderness of Greenland, before a midnight screening of Ida Lupino’s crime thriller The Hitch-Hiker about a couple of fisherman who unknowingly offer a psychotic escaped convict a lift. It can only go well, right?

There’s a chance to see Rita Hayworth/Gene Kelly musical Cover Girl at a kinder time on Sony Classic this week, while the channel also hosts a teatime screening of Waterloo – an account of the famous battle that sees Rod Steiger play Napoleon Bonaparte alongside the wonderful Christopher Plummer and Orson Welles. (There must have been something in the water in the ‘70s; ABBA’s Eurovision banger was released 4 years later.) Then it’s a Film4 sort of day, beginning with true expedition disaster story Everest, starring Jason Clarke, Josh Brolin and Jake Gyllenhaal, and ending with Richard Linklater’s 1980s set Everybody Wants Some!!, a ‘sequel in spirit’ and a return to the summer youth vibes of his breakthrough hit Dazed & Confused. If you want to run through, there’s a fine central performance from Denzel Washington as an idealistic defence attorney to check out in crime drama Roman J. Israel, Esq (from Nightcrawler filmmaker Dan Gilroy), before the lovely gay coming-of-age romance and slice of Brit life drama Beautiful Thing, the film adaptation of the hit play from Jonathan Harvey. The film also features a Mamas & Papas heavy soundtrack, which is always a winner.

There’s a couple from 1947 to choose between on Thursday morning: Orson Welles’ visually spectacular and inventive film noir The Lady from Shanghai, in which he stars alongside then wife Rita Hayworth, and western Angel and the Badman, starring John Wayne as a cowboy on the run who falls for a Gail Russell’s young Quaker girl. There’s a lovely performance from Sheila Hancock to accompany some ravishing Scottish landscape in Edie, the story of a widow’s determination to scale a mountain in the Highlands, while Emma Thompson and Brendan Gleeson are quietly understated as a German couple who begin their own form of protest against Hitler in Alone in Berlin, an adaptation of Hans Fallada’s searing anti-Nazi novel.

There’s such an eclectic collection to choose from today – so don’t expect any smooth segues here. A young girl in Nazi German is taught to read and love stories by the Jewish man hiding in her adoptive parents’ basement in the big screen adaptation of Markus Zusak’s beloved The Book Thief, while Steve Coogan and John C. Reilly deliver really lovely lead performances in Stan & Ollie, a tender biopic about Laurel & Hardy’s gig tour of British seaside towns in their twilight years. There are a couple of back-to-back action thrillers on 5Star, with Robert De Niro offering Bradley Cooper a drug to fully utilise his brain in sci-fi Limitless followed by Keanu Reeves returning for more criminal underworld action, stunning visuals and fantastic fight scenes in John Wick: Chapter 2. Harrison Ford stars as a cop assigned to protect a mother (Kelly McGillis) and son (Lukas Haas) who live in a reclusive Amish community in Peter Weir’s beautifully shot crime drama Witness, my personal fave of the day. Oscar Isaac and Jessica Chastain as a husband and wife facing the growing aggression and corruption of New York, 1981 in J.C. Chandor’s A Most Violent Year, while in the early hours there’s We Are the Best!, the joyful and tender coming-of-age story about three girls in 1980s Stockholm who set out to form a punk band…despite not knowing how to play an instrument.