Duke Box #37: Our Guide to the Best Films on TV 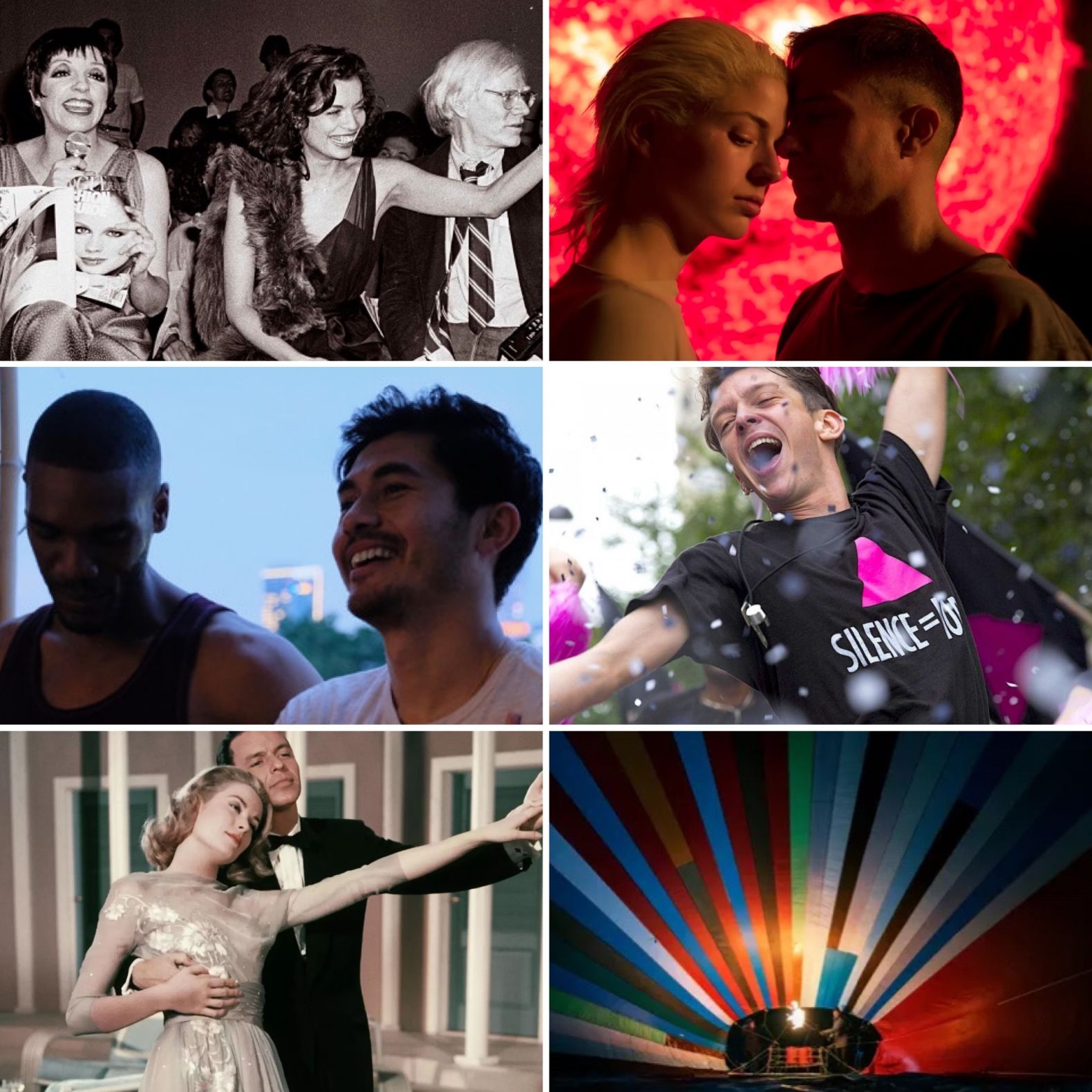 Cinema's about escaping really, isn't it? Dropping into new worlds and experiences and stories. I think there's plenty worth exploring this week, including the chance to see two delightfully releases from this year in the shape of Monsoon and Ema. I also recommend keeping an eye out for the brilliant 120 BPM, a moving, intimate and compelling look at a pivotal moment in the history of the LGBTQIA+ community.

A musical do-over of the screwball classic The Philadelphia Story, MGM’s Technicolor feast High Society sees Grace Kelly, Bing Crosby and Frank Sinatra take on the story of a jazz musician who tries to win back his socialite ex-wife when he learns she’s about to remarry. The film has a rich pedigree, with Crosby and Sinatra collaborating for the first time, Louis Armstrong appearing alongside his band and songs and music written by Cole Porter, including ‘Who Wants To Be a Millionaire?’ and ‘You’re Sensational’. It also reunites Kelly with her The Country Girl co-star Crosby, a fitting reunion seeing as that’s the role that Kelly scooped her Oscar for, while High Society marks the star’s final on-screen appearance. BBC2 follows that with the most recent adaptation of Arthur Ransome’s classic children’s tale Swallows and Amazons, a family adventure tale of two groups of children who play pirates over a piece of land in the Lake District but unite to uncover the mystery of a stranger in a boat. The scenery is breath-taking and a warming reminder of the beauty we have just a stone’s throw (or pirate ship sail away) from Lancaster. For more wonderful nature there’s documentary Earth: One Amazing Day, which spends twenty four hours in the company of some of the world’s most beautiful environments and extraordinary creatures – all narrated by the beautiful and extraordinary Robert Redford. There’s a proper treat following straight after as well, with the BBC having gotten their hands on recent release Monsoon, which we screened here back in October. Henry Golding stars as a British-Vietnamese man who visits Saigon for the first time in 30 years after fleeing the Vietnam War, prompting a moving journey of self-discovery. It’s one of the highlights of this year. Later in the evening on BBC, there’s some the sci-fi-western-action in Westworld, which sees a robot malfunction cause chaos for tourists in a futuristic amusement park set in the grimy, rowdy Wild Wild West. Yul Brynner and James Brolin star in the adaptation from Jurassic Park writer Michael Crichton, who clearly had a thing against theme parks.

Forever and a Day is one of those big collaborative films that happens every so often, uniting a myriad of directors, writers (including an uncredited Hitchcock here) and a pretty astonishing cast. Created initially to benefit war relief charities, the film involves an American looking to sell his ancestral English home during the Blitz, only to be regaled with the grand 140 year history of the place by its current tenant. The cast includes players like Buster Keaton, Charles Laughter, Claude Rains, Ray Milland, Ida Lupino, Merle Oberon and Elsa Lanchester, to name just a few. Think Toy Story but with cats and dogs in family animation The Secret Life of Pets, a bright, breezy and slightly sentimental offering from the director of Despicable Me. Documentary Studio 54 invites you to come on down to the 54 (thank you Chic) and explore the history and influence of the iconic, world-famous discotheque at the heart of New York and a defining cultural moment. Told through the eyes of its owner, it’s a compelling account of celebrities, scandal and a little bit of crime. Sticking with New York for a bit, cult comedy Coming to America sees Eddie Murphy star as a spoilt African prince who goes undercover in Queens to try and find himself a wife (James Earl Jones and Madge Sinclair play Murphy’s parents here and the duo would reunite as married royalty again in Disney’s The Lion King). German drama Balloon, meanwhile, is inspired by true events, telling the story of two families attempts to flee from East Germany to West in a homemade hot air balloon, all while trying to avoid the authorities who have wind of the plan and are desperate to track them down. It’s a strikingly made film and a surprising twist on the political thriller. Also dealing with weighty politics is Ralph Fiennes’ directorial debut Coriolanus, a bloody adaptation of Shakespeare’s play of a soldier pushed to take power and faced with dissent. Fiennes plays the titular role, supported by a deliciously conniving Vanessa Redgrave, Gerard Butler, Brian Cox and Jessica Chastain. It’s a heavy one from Shakespeare but a visceral viewing experience from the actor-director.

The dystopian young adult series The Hunger Games continues with its sequel Catching Fire, which sees Jennifer Lawrence’s rebellious hero Katniss Everdeen forced to manage rising District dissenters by the domineering Capitol. And if that means nothing to you, then maybe record it if you can and keep an eye out for the first entrant. However, the final two instalments of the saga crop up on Film 4 on Tuesday and Wednesday too.

There’s quite a variety of films to check out Oscar winners Julianne Moore and Mahershala Ali are just two of the new additions to The Hunger Games: Mockingjay Part One, the penultimate episode of the hit teen-dystopia franchise led by Jennifer Lawrence. Chloe Grace Moretz and Kodi Smit-Phee step into Let Me In, an American version of hit Swedish vampire film Let the Right One In, directed by Matt Reeves (War for the Planet of the Apes). The Swedish film is one of the greats of the 21st century so it’s a bit of an unenviable task, but the 1980s setting and political context always hovering in the background offers new material and framing. Powerful documentary Flint takes a look at the ongoing man-made disaster in Flint, Michigan, which has seen tens of thousands exposed to water poisoned by lead. Eye-opening and harrowing, it’s an exploration of the last five years, including the shocking limited response by officials to help residents and rectify the situation. Then there are a couple of fascinating late night treats, beginning with French drama and Cannes grand Jury Prize winner 120 BPM. Set in the early 90s, the film tells the story of ACT UP Paris, a community of activists who fought to turn government and authority indifference and vindictiveness into support and intervention to curb the HIV/AIDS epidemic. It’s a really wonderful film that balances the hard-hitting subject matter with so much love and tenderness; I even picked it as one of my top ten films of the year, back when we screened it in 2018. Finally, there’s Ema, the latest from Jackie and Neruda director Pablo Larrain. Starring Gael Garcia Bernal, the film features all of the strange and beautiful imagery and framework of Larrain’s previous work, plus some fascinating musical sequences, as it follows a couple forced to confront the aftermath of an adoption gone awry after their relationship falls apart.

The Katniss Everdeen franchise comes to an end with The Hunger Games: Mockingjay Part 2, this time with Gwendoline Christie joining the ranks (and Michelle Forbes for all your Star Trek and Battlestar Galactica fans). A clever police officer, an even sharper master-thief and a woman find themselves in a complicated love triangle in romance-crime-drama The Spider and the Fly, while Richard Ayoade directs Jesse Eisenberg and Mia Wasikowska in his darkly comic adaptation of Dostoyevsky’s The Double, the story of a man driven to the point of breakdown when his doppelgänger takes over his life.

British crime thriller A Window in London is relatively underseen but has very respectable reputations. With a touch of the Hitchcock about it, it follows a passerby (Michael Redgrave) who witnesses a murder through a passing train. In the repeats, meanwhile, there’s another chance to see High Society and the opportunity to indulge in 2/3 of the Cornetto trilogy with back-to-back Shaun of the Dead and Hot Fuzz.

Ryan Reynolds stars as a snail with dreams of becoming the world’s greatest racer in bright family animation Turbo, showing on CBBC in the early evening. It could maybe do more with the premise to satisfy adults, but the voice talent (which also includes Paul Giamatti, Samuel L. Jackson – without an F-bomb – and Maya Rudolph) is colourful and off-the-wall enough to entertain smaller ones. For more grown-up affairs though, there’s the bruising Clint Eastwood western Hang ‘Em High. Clint stars as an innocent man who barely survives a lynching at the hands of Ed Begley, setting him on the path to becoming a lawman determined to bring the vigilantes to justice. It’s not a delicate film by any stretch of the imagination, with Clint and the camera not afraid to get embroiled in the mire. Keep an eye out for Bruce Dern and Dennis Hopper popping up too. Finally, there’s action-thriller Premium Rush, which stars Joseph Gordon-Levitt as a bike messenger who finds himself in a life-or-death chase through the streets of Manhattan, pursued by Michael Shannon’s corrupt cop. The beats are similar but it’s a neat twist on the 1970s style car chase films, with all sorts of peril thrown in the way of the unsuspecting cyclist.