Duke Box #36: Our Guide to the Best Films on TV 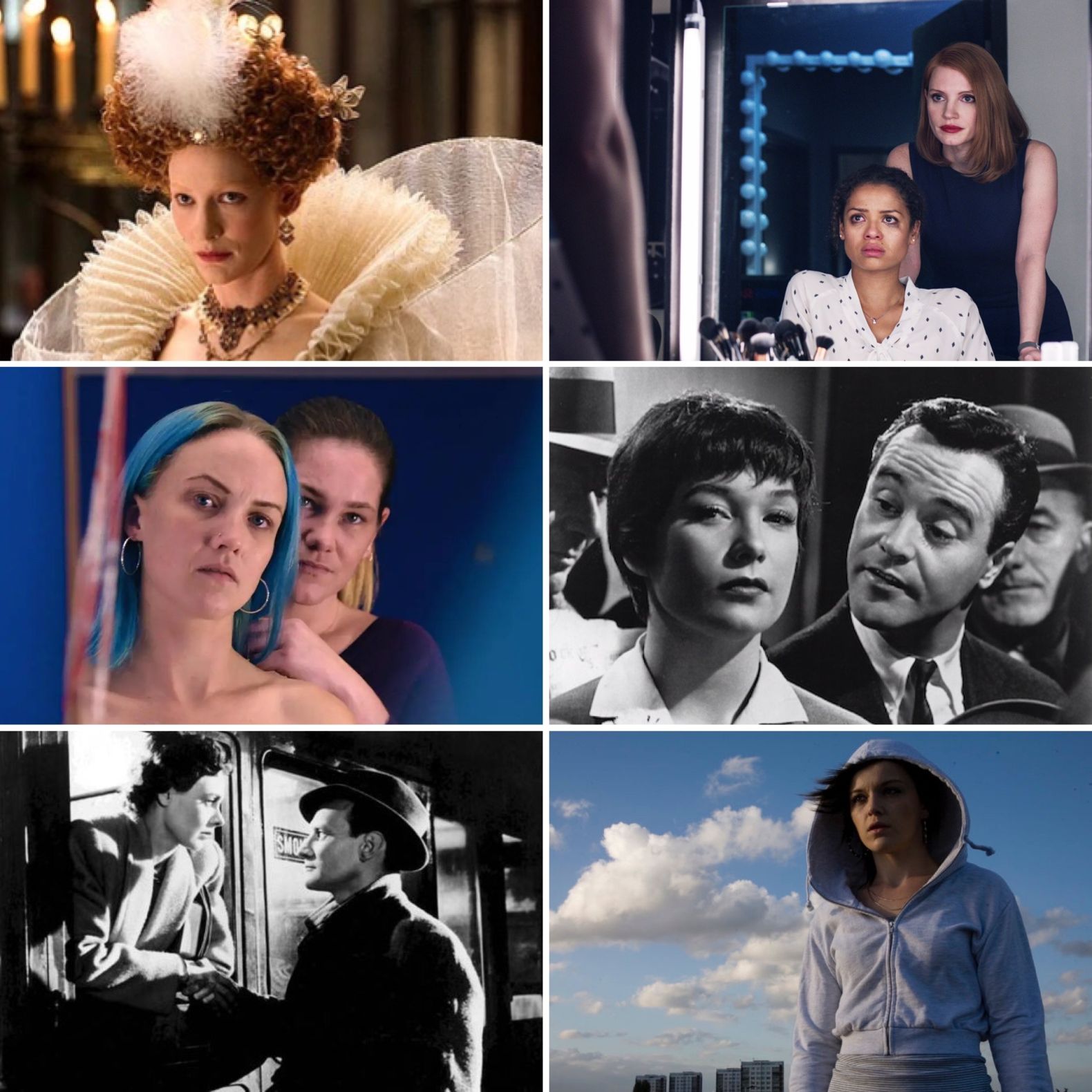 We’ve hit the time of year where film channels are taken over made-for-TV Christmas films. There’s nothing wrong with them if that’s your cup of tea (occasionally it’s mine), but it does narrow the pool of listings available…so this week’s recommendations feel a little compact. There are still some fabulous choices, mind – from British powerhouse filmmaking like Lynn + Lucy and Andrea Arnold’s Fish Tank, to fascinating documentary Nae Pasaran, another fine afternoon with Brief Encounter and the brilliance of Billy Wilder’s The Apartment.

I’ve also quickly hopped on to a couple of freeview online platforms to see what they have on offer. You can see a few of those picks at the bottom.

It was around five months or so ago that Brief Encounter was a highlight on one of these blogs, so it seems perfectly fine to shine the spotlight on this sensitive, powerful and really quite beautiful film from David Lean about a couple of strangers who meet and form an illicit bond. Plus, I love it and Celia Johnson's performance so much that it's always hard to resist. There’s a lighter, frothier and slightly goofy rom-com in 13 Going on 30, which is a bit like a gender-reversed, more self-aware Big. Jennifer Garner is charming as the lead, while Mark Ruffalo and Andy Serkis pop up in support. I’ll whisper it now, but Earthquake isn’t actually very good – but it does help set the disaster movie template that seemed to thrive in the ‘70s and ‘90s.Plus it’s a chance to see Charlton Heston, Ava Gardner, Lorne Greene, Richard Roundtree and more battle shifting tectonic plates. The film that really put Cate Blanchett on the map, the sumptuously shot and designed historical drama Elizabeth sees the star in early captivating form as a young Elizabeth I in the early years of her monumental monarchy. While stars like John Gielgud and Richard Attenborough add Shakespearean weight, you’ll have fun spotting a fantastic number of rising stars, including Daniel Craig and Emily Mortimer. Nae Pasaran is a really interesting and moving documentary about a group of Scottish factory workers in 1974 who refused to carry out warplane engine repairs in an act of solidarity against the Chilean military coup. Filmed by a man affected by the regime in Chile and featuring interviews with the men involved, it’s powerful stuff. There’s a British indie double bill on BBC2, beginning with Lynn + Lucy, a mysterious drama about an intense friendship between the titular characters that is tested after tragedy occurs. The film builds and builds, adding dread and social commentary onto misunderstandings, thanks to Fyzal Boulifa’s sharp directing and powerful lead performances from Roxanne Scrimshaw and Nichola Burley. After that there’s Sus, an adaptation from The Long Good Friday writer Barrie Keefe’s own play about a young black man who’s arrested on suspicion of murder on the evening of the 1979 general election. Speaking of The Long Good Friday, the late, great Bob Hoskins makes an appearance in Mermaids, opposite Cher and alongside Winona Ryder and Christina Ricci. It’s a bittersweet drama-comedy about growing up and eccentric households that’s more gentle than it maybe could have been, but the relationships and chemistry between the actors is very enjoyable. Plus, it gave us Cher singing ‘The Shoop Shoop Song’.

What a treat to have Billy Wilder’s sublime The Apartment grace TV screens on Sunday afternoon. Jack Lemmon and Shirley MacLaine make a divine double act in this charming, thoughtful and very funny story of an insurance salesman who lets his manager use his apartment for his affair, but stumbles when he realises that the mistress is the elevator girl he has a crush on himself. Full of humour and pathos and romance and cynicism, it’s a real must if you’ve never seen it before. There are also a couple of family film offerings on in the afternoon, beginning with Aardman animation Flushed Away. It follows a posh domesticated pet rat who’s accidentally (you guessed it) flushed away into the sewers of London and reliant on the rats he meets down there to help him get home. There’s some voice cast here, with Hugh Jackman, Kate Winslet and Ian McKellen (as a villainous toad) joined by Jean Reno, Bill Nighy, Andy Serkis, Kathy Burke, Miriam Margoyles and Shane Ritchie. There’s more bright, beautiful animation, fun adventure and charm in hit sequel Kung Fu Panda II, which picks up the story of the lovable warrior panda Po (Jack Black) who this time has to take on a villainous peacock (Gary Oldman). The stellar voice cast from film one, including Angelina Jolie, Jackie Chan and Dustin Hoffman, return, joined by newcomers like the fabulous Michelle Yeoh and Dennis Haysbert. Free State of Jones sees Matthew McConaughey star as real-life figure Newton Knight, a Confederate army deserter who banded together with other rebels, farmers and local slaves to defy and rise against a corrupt Confederate government. Gugu Mbatha-Raw, Mahershala Ali and Brendan Gleeson co-star in a film that, while not smoothly told, recalls a fascinating moment in American history. Finally, there’s some wintry stage on screen with Scottish Ballet’s The Snow Queen. This adaptation of Hans Christian Andersen’s classic fairytale was performed in celebration of the company’s 50th anniversary and recorded at Edinburgh’s Festival Theatre.

Far from the hard-boiled crime film that the title suggests, The Kidnappers is a charming British drama set in early 20th century Nova Scotia that follows two orphaned brothers, raised by their grandparents, who find an abandoned baby and secretly try to look after it. For something a bit more frenetic and thrilling, there’s the return of Jason Bourne hunting for his identity in The Bourne Supremacy. Paul Greengrass takes over the directing responsibilities, while lead Matt Damon is joined by Joan Allen. Last up, Jessica Chastain stars in political thriller Miss Sloane as a determined lobbyist who finds her job, personal life and friends in a vulnerable spot after she decides to back a law to pass gun control legislation. The film rides on Chastain’s searing lead performance but there’s a wonderful ensemble of support that includes Gugu Mbatha-Raw, Mark Strong, John Lithgow and Michael Stuhlberg.

I remember watching ’71 right here in our cinema on volunteer usher duty and it was such a relentlessly tense film that I almost forgot that I had audience members to let out at the end of the film. Jack O’Connell stars as a young British soldier who has to find his way back to his unit after getting separated from them on the streets of Belfast, 1971. It’s wonderfully directed, enhancing both the claustrophobia of the situation and the scope of the backdrop, while O’Connell is typically great.

Andrea Arnold followed up her critically acclaimed debut feature Red Road with the equally gritty drama Fish Tank, a slice of British realism that won over Cannes audiences and scooped the Jury Prize. Katie Jarvis made her debut as a rebellious 15-year-old whose fractious school and home life is complicated further by the arrival of her wayward mother’s latest boyfriend, Conor (Michael Fassbender), who she forms an uncomfortable bond with. With Jarvis and Fassbender on excellent form, Arnold’s film packs a punch.

John Mills and Michael Redgrave star in The Way to the Stars, a film that follows the work lives and romances of a couple of officers on an English RAF base. From the toll of war to the loneliness of those at home, it’s a thoughtful war film, co-written by the esteemed Terence Rattigan. The evening, meanwhile, sees documentary Woodstock – Three Days That Defined a Generation delve into the music, festival-goers and images of the iconic festival to explore the build up and experience of a moment that came to define a cultural revolution. Elsewhere, there’s the continuation of the Bourne saga, with Matt Damon’s spy racing around the globe in another intelligent, thrilling collaboration with director Paul Greengrass. David Strathairn, Paddy Considine and Albert Finney are all welcome additions to this third instalment.

With the sparseness of the week continuing I thought I’d flag up a couple of previous recommendations. The surreal summer drama The Swimmer sees Burt Lancaster hopping in and out of the pools of his suburban neighbourhood in a woozy story of loneliness, while there’s a fantastic chance to see Serio Leone’s classic Spaghetti Western The Good, The Bad and the Ugly¸ featuring Clint Eastwood, Eli Wallach, Lee Van Cleef and that iconic theme from Ennio Morricone.

Catch Up on Catch-Up

As this is a pretty slow week on the recommendations front, I thought I’d just note that you can still catch a number of previously highlighted films on catch-up platforms. To list all of them would take ages but I’ve picked a few main ones out, including a couple that I’ve not seen appear on the channels themselves.

BBC iPlayer – iPlayer is great for making some films available for a fair amount of time after they’ve been on TV, as well as housing ones they haven’t screened for much longer. The current selection is fantastic, with Judy Garland’s A Star is Born and Scorsese’s Silence still up there, alongside horrors Night of the Living Dead (1968) and The Blair Witch Project (1999), comedy-biopic Man on the Moon (1999), documentary Minding the Gap (2018) and sci-fi thriller Twelve Monkeys (1995). They’ve also added to their Silver Screen collection (although these may make their way onto terrestrial channels – don’t quote me on that). Really worth having a root through if you can.

All4 – The Killing of a Sacred Deer, Shoplifters, Bacurau and more can be found on All 4, along with a series of shorts and debbie tucker green’s hour-long BAFTA-winning film random (2011), based on her own play.

C5 – I spotted the brilliant Take Shelter (2011) on here and highly recommend checking it out if you’ve never seen it before. Directed by Jeff Nichols (Mud, Loving), it stars Michael Shannon as a family man plagued by a series of apocalyptic visions and forced to question whether he should shelter his family from the coming storm or from himself. Co-starring Jessica Chastain, it’s a beautiful and tense exploration of trust, love, destiny and mental illness, with a gorgeous score from David Wingo.