Duke Box #27: Our Guide to the Best Films on TV 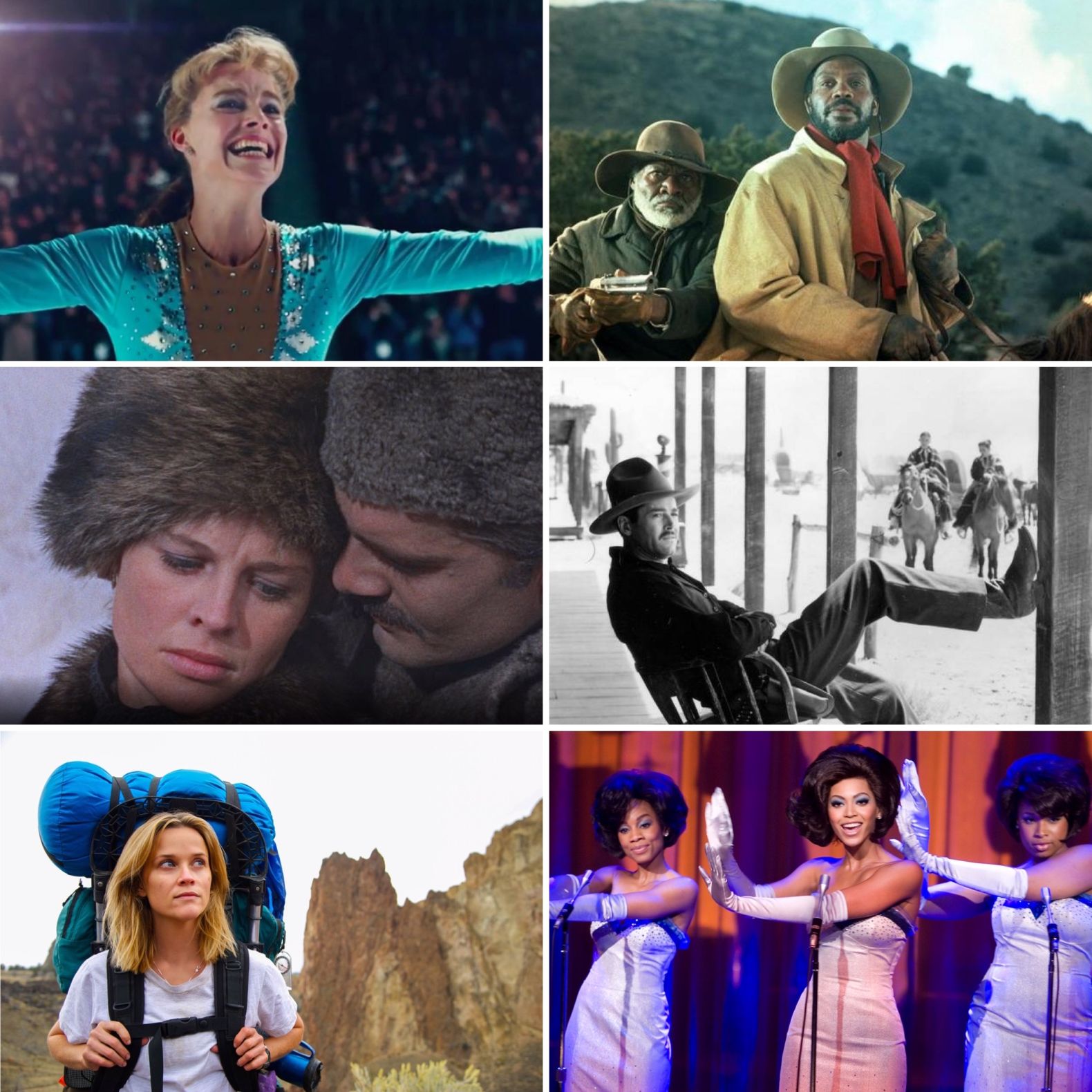 From classics like My Darling Clementine and Doctor Zhivago, through to relatively recent releases like I, Tonya and Journeyman, there's a breadth of old and new in this week's suggestions - so maybe it's worth pointing you in the direction of Silverado for Pick of the Week. Released in the '80s, Lawrence Kasdan's homage to westerns played a part in the genre making a bit of a comeback at that time. Fun, stunning to look at, and a really fantastic ensemble cast.

It’s all farce and vintage cars in Genevieve, a bit of a British classic about two couples who set up a bet about who drive to London quicker. Naturally, nothing goes to plan and it’s all a bit of a quintessential lark – one that inspired Stanley Kramer’s It’s a Mad, Mad, Mad, Mad, Mad World, which cropped up a couple of weeks back. Robert Mitchum, Marilyn Monroes and some spectacular CinemaScope scenery star in Otto Preminger’s Western, which is never quite as good as it should be but still worth a watch. If you’re looking for something to watch with the family, Emma Watson and Dan Stevens navigate all sort of effects wizardry in the live-action version of Disney’s Beauty & the Beast, while Macauley Culkin has to deal not only with being left behind by his family (including the divine Catherine O’Hara as his mum) but also some shifty crooks who want to rob his home (Joe Pesci as a home invader is quite brilliant). I’ve resisted recommending this one for a while, because it’s a Christmas film and it is only September, my word, but with another Christmas-based film cropping up, it seemed fair game. There are Oscar statues galore among the three final picks of the day. The merry murderesses of the Cook County jail helped Rob Marshall’s glitzy adaptation of the smash-hit musical Chicago win Best Picture, while Catherine Zeta Jones scooped a supporting win for playing Velma Kelly alongside Renee Zellwegere’s Roxie Hart. Allison Janney also took home a Supporting Actress award for her turn in biopic I, Tonya, which features an equally excellent Margot Robbie as notorious ice skater Tonya Harding, who was involved in one of the great and most chaotic controversies in sporting history. Finally, bang on midnight, Henry Fonda and Katherine Hepburn both won for their roles as a cantankerous father and conciliatory mother who have a strained relationship with their daughter (Jane Fonda) in family drama On Golden Pond.

Well, this is a pretty sublime day for films. John Mills and Anthony Quayle star in war film Ice Cold in Alex, a really gripping and sharp story of Army and medical personnel trying to make their way across the North African desert (dreaming of the simple pleasure of an ice cold lager in Alexandria) but coming up against a number of obstacles, including a mysterious hitchhiker… There’s more war in David Lean’s glorious epic Dr Zhivago, with the Russian Revolution the devastating backdrop for the love affair between a physician (Omar Sharif) and a political activist’s wife (Julie Christie). Geraldine Chaplin, Rod Steiger, Tom Courtenay and Alec Guinness all pop up in support. If that’s not your bag, there’s a brilliant Western triple-bill on Paramount. Seriously, there won’t be many better than this. The Gunfighter sees Gregory Peck star as the titular character, riding into town with a reputation, looking for his old love and running into trouble, while My Darling Clementine, a real Western classic, stars Henry Fonda as Wyatt Earp getting ready to take on the Clantons at the OK Corral. Then there’s the more recent (well, 35 years recent) and sadly slightly forgotten Silverado, Lawrence Kasdan’s film about a bunch of misfits looking to do right. The core four? Kevin Kline, Kevin Costner, Scott Glenn and Danny Glover – wonderful. Broadway favourite Dreamgirls, inspired by the Supremes, makes its way onto big screen, with Beyonce in the lead, a brilliant Eddie Murphy in support, and an Oscar-winning Jennifer Hudson on hand to belt out the signature song And I Am Telling You I’m Not Going with gusto. Paddy Considine directs, writes and stars in Journeyman, alongside a fantastic Jodie Whittaker, in a tender and moving story about a British boxer whose injury takes over his whole life, while late night French drama Blue is the Warmest Colour follows a young student’s journey into womanhood and her own identity, in part through an intense relationship with a woman who has blue hair.

Christopher Walken stars as a man who awakens from a coma with a psychic ability in David Cronenberg’s chilling adaptation of Stephen King’s The Dead Zone. It’s a really fantastic mix of drama, political tension and an edge of horror, with Brooke Allan, Herbert Lohm and a sublime Martin Sheen in support. Groundhog Day meets sci-fi blockbuster in the really fun Edge of Tomorrow, where Tom Cruise has to fight aliens over and over again after the day restarts whenever he dies. Emily Blunt, Brendan Gleeson and the late, great Bill Paxton are also having a blast. recognise the title from

That Christmas film I mentioned earlier, well here it is – The Holly and the Ivy sees Ralph Richardson and Celia Johnson star in a rather poignant and thoughtful drama about a clergyman whose neglect for his family to focus on his parishioners comes to a head at a Christmas family gathering. Meanwhile the early hours of the morning sees documentary Leaning into the Wind, an intimate look at artist Andy Goldsworthy and how the years of his life and career have impacted the relationship between landscapes, cities and the body in his work.

Robert Duval, Bill Murray and Sissy Spacek is a very fine, intriguing leading trio for a film and luckily Get Low is a very fine, intriguing film, following a Tennessee hermit in the 1930s who decides to throw his own funeral while still alive. Meanwhile, Uma Thurman’s mysterious Bride is believed to be dead, only for her to come back on a hellbent mission to, well, Kill Bill in the first instalment of Tarantino’s two-parter. Finally, there’s Wild, a film I actually find quite hard to describe. An adaptation of Cheryl Strayed’s memoir, it stars Reese Witherspoon (who also produced) as Cheryl as she sets out on a hundred-mile solo hike to overcome a personal tragedy. It sounds mawkish, but it’s so quietly moving and piece-building, with a quite remarkable moment of cathartic emotion that stays with you. Plus, it has a wonderful soundtrack including Springsteen, Simon & Garfunkel and Leonard Cohen.

Maxine Peake is on top form as a woman trying to make a name for herself on the 1970s stand-up circuit in Funny Cow, which features Paddy Considine and Stephen Graham in strong support. From working men’s clubs of the north, to organised crime in 1960s’ London with The Krays, a look at the lives of two of Britain’s most recognisable gang leaders. We all know the Kemp brothers star as Ronnie and Reggie, but it’s worth noting that Billie Whitelaw picked up a BAFTA nod for her role as their doting mum.

Ealing drama Mandy was quite a revolutionary and subversive film when released, telling the story of a deaf and mute child and her family’s fight for the education they believe she deserves. It’s a stirring bit of British realism, reflecting both society at the time and prompting questions still relevant now. In the evening, meanwhile, there’s quite the variety of choices. INXS’ late, great, charismatic frontman is the subject of documentary Mystify: Michael Hutchence, which not only celebrates the music and influence of the band and singer, but also looks at the events that contributed to the turmoil and sadness of his private life. Written by horror greats Charles Beaumont (The Twilight Zone) and Richard Matheson (I am Legend), Night of the Eagle is a black-and-white chiller about a Professor who burns his wife’s witchcraft paraphernalia which, obviously, has absolutely terrible consequences. Finally, Catherine Deneuve and Catherine Frot have wonderful chemistry in tender French drama The Midwife, about a woman who receives a surprise from her father’s former mistress.