Duke Box #26: Our Guide to the Best Films on TV 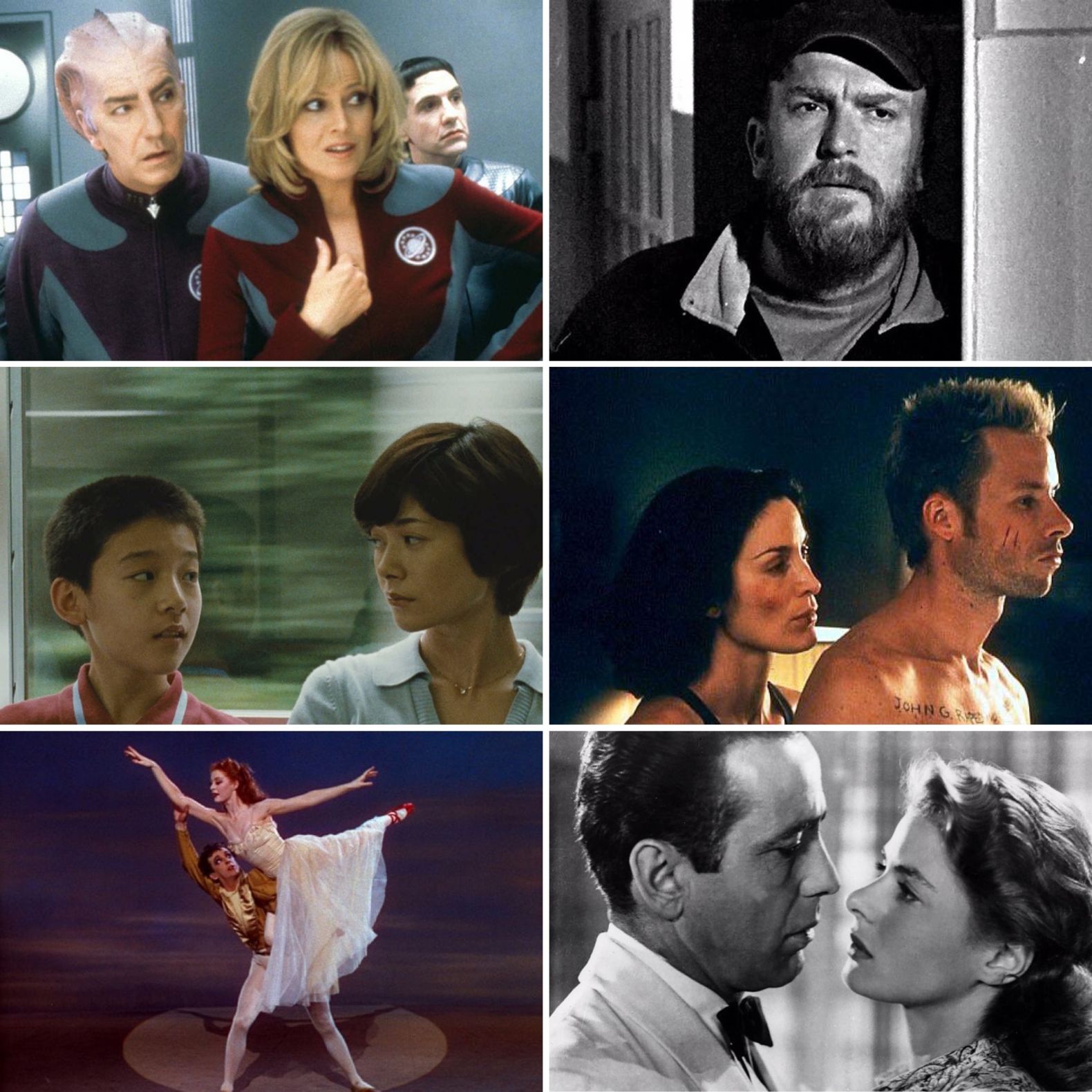 It's virtually impossible to single out one highlight for this week, so I gathered them all and put them in the accompanying picture! For the classics, The Red Shoes and Casablanca take some beating, whilst 2019's Bait was one of last year's finest. Memento is a great watch, especially for first-time viewers, we adore Kore-eda's work here at The Dukes and, well, Galaxy Quest is just pure comfort.

BBC2 have a sublime Powell & Pressburger double-bill, with the breath-taking classic The Red Shoes and war film The Battle of the River Plate. A story of a ballerina caught between love and ambition, adapted from a Hans Christian Anderson fairytale, the former is blindingly beautiful and heartbreaking, encapsulated by Moira Shearer’s star turn. The latter, meanwhile, focuses on fact rather than fiction, packing a punch with its depiction of an early WWII naval battle. (Side note: Michael Powell later married Thelma Schoonmaker, a brilliant film editor who is a long-term collaborator of Martin Scorsese. Scorsese is such a fan of the directors’ works, especially The Red Shoes). However, if film noir is your thing, you might want to check out The Gun for Hire, a classic of the genre starring the scintillating, and quite iconic, pairing of Veronica Lake and Alan Ladd in a story of (you guessed it) corruption, blackmail and a femme fatale. Burt Reynolds and Sally Field star in one wild car chase in Smokey & the Bandit, which is a fun, if dated, vehicle for the duo. One of my favourite comedies is on in the evening – Galaxy Quest, a loving pastiche of old Star Trek that follows a group of forgotten actors from a cult 1970s’ sci-fi show as they’re transported into space by a group of aliens who believe them to be the real life heroes that they used to play. The brilliant ensemble includes Sigourney Weaver (riffing on her iconic Ripley role), a dynamo Sam Rockwell and a wonderfully sardonic and endless quotable Alan Rickman. It’s so on the ball with its references and affection that it was once voted the 7th best Star Trek movie. There’s a change of pace – and structure – in Christopher Nolan’s smart, sharp breakthrough feature Memento, a compelling neo-noir starring Guy Pearce as a man with short-term memory loss on the hunt for his wife’s murderer, with only his tattoos for clues. For an interesting-sounding twist on the found-footage horror film, there’s The Devil’s Doorway, which follows two priests’ investigation of sinister events at a Magdalene Laundry in 1960s Ireland, shot on 16mm to recreate the era’s aesthetic. There are also two fantastic films on after midnight, with After the Storm, another wonderful, tender drama from Shoplifters filmmaker Hirokazu Kore-eda about a private detective trying to reconnect with his ex-wife and son, and Jonathan Glazer’s dark, daring sci-fi thriller Under the Skin, starring Scarlett Johansson as a mysterious woman who’s on the hunt for lonely men in Scotland, ready to lure them into her lair.

The legacy of Casablanca as one of the greatest films ever made is so well earned, from the performances and chemistry of Ingrid Bergman and Humphrey Bogart, delivering sublime dialogue, to the direction of Michael Curtiz. A broad sweep of romance and war, it’s wonderful. A BAFTA winner for Film, Director, Actor and Actress, Sunday, Bloody Sunday is a thoughtful film that follows a middle-aged doctor (Peter Finch) and a divorced woman (Glenda Jackson) who are both in a relationship with a Murray Head’s free-spirited sculptor, each aware and accepting of the other’s involvement with their lover. Also released in 1971, 10 Rillington Place sees the late Sir Richard Attenborough in thoroughly bone-chilling form as British serial killer John Christie, with John Hurt in BAFTA-winning support as his neighbour Timothy Evans. For something a bit more recent, however, there’s Gully Boy, a coming-of-age musical drama that follows an aspiring street rapper as he looks to escape his troubled home life and achieve his dreams.

There are an interesting couple of documentaries for you to check out on Monday, conveniently both on BBC4. Spitfire, narrated by Charles Dance, tells the story of the fighter plane and pilots that proved so pivotal in WWII, whilst Storyville’s Maiden: War on the Waves is a revealing and inspirational look at how Tracy Edwards became the skipper of the first all-female crew to enter the 1989 Whitbread Round the World Race.

Gregory Peck and Joan Collins were an on-screen partnership I never knew existed until flicking through the listings for this week, but they’re right there and present in The Bravados, a Western about a man chasing down the four outlaws who killed his wife. Burt Lancaster and Kirk Douglas star in crime drama I Walk Alone, a Prohibition set story of a man released from prison and his partner who’s unwilling to share profits with him. Ewan McGregor, Naomie Harris, Stellan Skarsgård and Damian Lewis star in spy thriller Our Kind of Traitor, a John le Carré adaptation that is quite as punchy as Tinker Tailor Soldier Spy but still hits the right beats. Tamil-language drama Kattumaram gets an premiere in the early hours, following a fisherman, devastated by the tsunami which struck his community, who discovers his niece is in love with a woman. It’s another I’m not too familiar with but I’m also looking forward to checking it out.

Robert Duvall won his only Oscar for his role as an alcoholic country star looking to make amends and start over in Tender Mercies. Balancing restrained emotion with melodrama, Bruce Beresford’s drama also stars Tess Harper, Betty Buckley, Wilfred Brimley and a young Ellen Barkin. Elsewhere in the evening, Keanu Reeves and Alex Winter take a trip through history in order to pass their class and save their band in the totally bodacious time-travelling comedy Bill & Ted’s Excellent Adventure, whilst Aubrey Plaza’s unstable social media fanatic moves to LA to insert herself into the life of Elizabeth Olson’s Instagram star in black comedy Ingrid Goes West. Finally, in the early hours but hopefully destined for All 4, there’s the graceful, layered drama Fill the Void, the story of a devout 18 year old Hasidic girl who must decide, under pressure from her family and community, whether she should marry her widowed brother-in-law. It’s a gripping film about self-sacrifice, tradition and protecting oneself.

Cameron Crowe’s version of Vanilla Sky, an English-language remake of Spanish film Open Your Eyes (1997), is often divisive, but those who like it tend to find it well worth the time. The cast is impressive, with Tom Cruise starring alongside Penelope Cruz, Cameron Diaz, Kurt Russell, Tilda Swinton and more in the cross-genre thriller. There are more rad adventures for Keanu Reeves and Alex Winter in hit sequel Bill & Ted’s Bogus Journey, a partial pastiche of Ingmar Bergman’s The Seventh Seal that’s achieved cult status in the last twenty years. There’s a TV premiere for one of the best films of 2019 – Mark Jenkins’ Bait. The gloriously shot black-and-white film about struggling Cornish fishermen was a real hit with Dukes’ audiences, was named Film of the Year and Decade by Mark Kermode and scooped up a BAFTA for Outstanding Debut by a British Writer, Director or Producer. Finally, it’s not too often that the experimental films of Derek Jarman make their way onto television; The Garden, starring frequent collaborator Tilda Swinton and Michael Gough, is a non-narrative film set in the filmmaker’s own rural garden that takes in love, religion, oppression, homosexuality and more.

There’s, uh, not a great deal to choose from on Friday, so now might be the time to drop into Galaxy Quest and The Drop, which are two gems on repeat.