Duke Box #24: Our Guide to the Best Films on TV 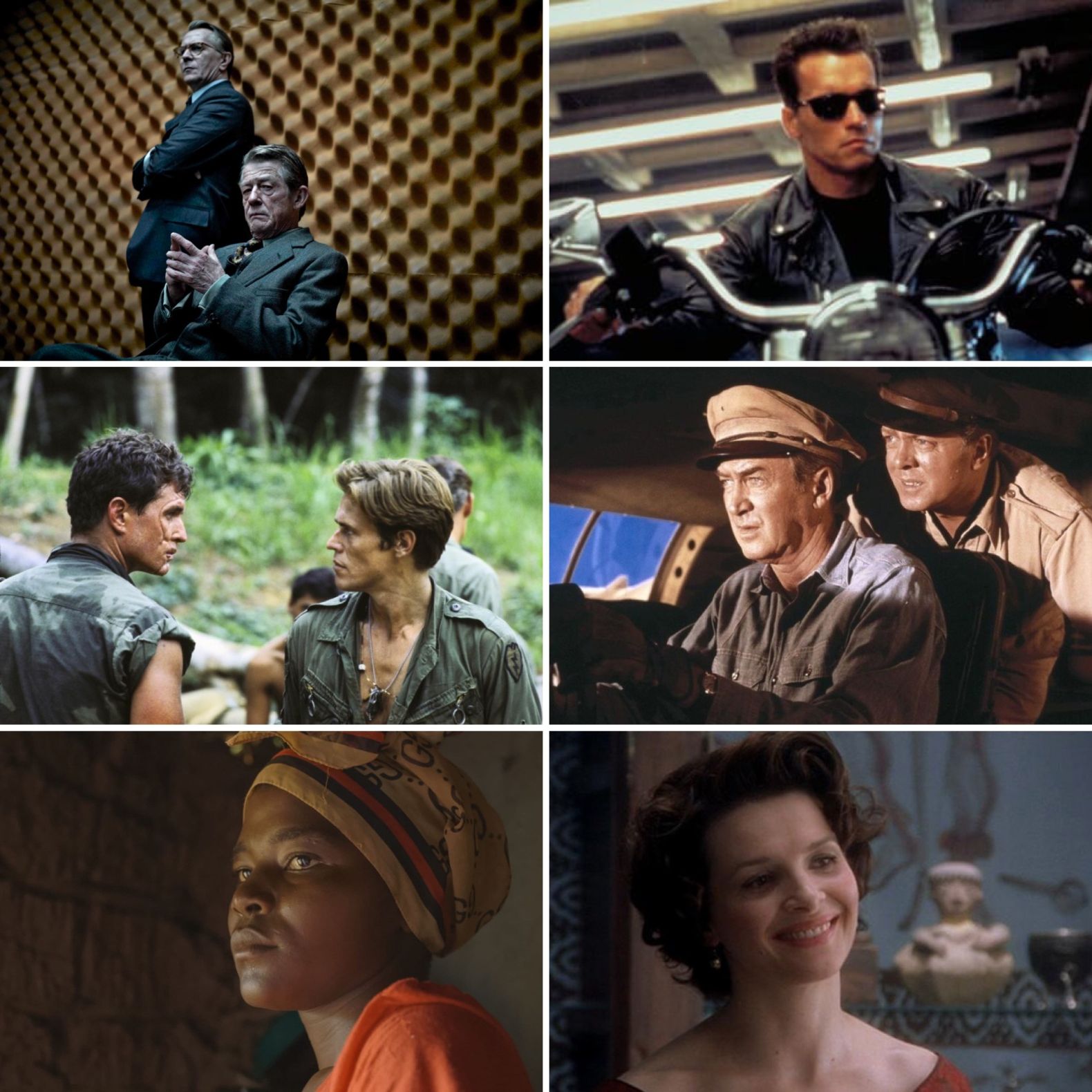 It's not exactly a week that's packed with new picks, although there are titles to catch up that you might have missed first time around. Still, there are some wonderful things out for every mood, making it quite hard to narrow down to one Pick of the Week. If you're looking for hard-hitting, there's Oliver Stone's harrowing war classic Platoon. If comfort and charm are on your mind, however, there's the delightful Chocolat, perfectly placed on a Sunday afternoon.

What with it being Bank Holiday Weekend, it’s pretty unsurprising that there are a number of family films for the kids to check out, including fantasy adaptation The Spiderwick Chronicles, starring a young Freddie Highmore, Nick Nolte, David Strathairn and more, and Kenneth Branagh’s sumptuous, magical live-action take on Cinderella, featuring Lily James’ heroine, Helena Bonham Carter as a delightful Fairy Godmother and Cate Blanchett having a ball as the Wicked Stepmother. It’s a beautiful looking film too. BBC1 have back-to-back films on in the shape of Clint Eastwood’s Sully, starring Tom Hanks as a real-life pilot who had to work miracles to safely land a damaged plane full of passengers, and Joel Schumacher’s John Grisham adaptation The Client, a slick legal-thriller about a boy who’s a witness to Mafia-involved murder. Susan Sarandon and Tommy Lee Jones are excellent, but the late Brad Renfro is fantastic as the child. Elsewhere, there’s first outings for Pierce Brosnan’s Bond, Samantha Bond’s Moneypenny and Judi Dench’s M in GoldenEye (featuring a Sean Bean baddie and a killer Tina Turner theme), Knives Out director Rian Johnson’s time-travel, sci-fi thriller Looper (with Bruce Willis, Joseph Gordon-Levitt and Emily Blunt), and, if you have the stomach for it, Mandy, a trippy, twisted thriller about a couple’s idyll destroyed by a nightmarish hippie cult. Full of gonzo violence, disturbing and hypnotic visuals, and a brilliant performance from Nicolas Cage, it’s not for the faint-hearted.

The Living Daylights and Timothy Dalton’s (fantastic) Bond were criticised at the time for being a bit too gritty but looking back it’s a nice hint at what’s to come in the Daniel Craig era – and comes with a great a-ha theme to boot. Juliette Binoche dazzles as a chocolatier who turns the lives of a repressed village in 1950s France upside down in the really delightful Chocolat, a warm hug of a film that’s gorgeous to look at, has a truly excellent ensemble (including Judi Dench, Johnny Depp, Alfred Molina and the great Leslie Caron) and will have you craving chocolate for days.

There’s chaos and comedy in Stanley Kramer’s It’s a Mad, Mad, Mad, Mad World, a sort of blueprint for all those films about an eccentric bunch of strangers racing across the country to track down some loot. It’s a cast of greats too: Spencer Tracey, Ethel Merman, Mickey Rooney, Buster Keaton and more all make an appearance. There’s thrilling tension aplenty in both The Colditz Story, which sees John Mills’ British Officer try to break out of an POW camp situated in the impenetrable Colditz castle, and Robert Aldrich’s The Flight of the Phoenix, which sees James Stewart, Richard Attenborough, Ernest Borgnine and Peter Finch as just some of the passengers stranded in the Sahara Desert after a crash and encouraged by one mysterious traveller to try rebuilding the plane to escape in. There’s the sublime and the ridiculous all bundled up together in both ABBA musical sequel Mamma Mia! Here We Go Again – which makes little to no sense but does have Cher singing ‘Fernando’ to Andy Garcia – and cult ‘80s fantasy fare Highlander, starring Christopher Lambert and Sean Connery as immortal swordsmen battling it out in Scotland and New York. Remember: ‘there can only be one’. Finally, all bets are off in Aaron Sorkin’s Molly’s Game, the true story of Molly Bloom whose underground poker empire became a favourite haunt for celebrities, tycoons and the Russian mob, prompting an FBI investigation. Jessica Chastain takes the lead, with Idris Elba and Kevin Costner in support.

In The Sopranos, James Gandolfini’s lead gangster Tony Soprano repeatedly refers to Gary Cooper as “the strong, silent type” – clearly he hadn’t seen Along Came Jones. Starring alongside Western stalwart Dan Duryea and Loretta Young, Cooper has a blast in the comic western, which fondly parodies the genre. A much more serious affair is Oliver Stone’s Oscar-winning Vietnam War epic Platoon, a harrowing film about a young soldier confronted with the horrors of war. It features a vast ensemble, with Tom Berenger and Willem Dafoe the stand-outs. Finally, in the early hours of the morning (which could be an appropriate time for its discombobulating rhythm) there’s Danny Boyle’s Trance, a trippy crime-thriller which sees James McAvoy’s art auctioneer who hires a hypnotherapist to help him remember the night of a robbery he was involved in.

Brosnan’s Bond teams up with Michelle Yeoh to take down Johnathan Pryce’s media mogul in Tomorrow Never Dies, which, whilst not the most remarkable 007 film out there, does provide for some surprising commentary and satire. Peter Greenaway’s black comedy Drowning By Numbers, however, is much more surreal, following three married women – a grandmother, her daughter and her niece, all named Cissie Colpitts – who discover the same to deal with their husbands. Flitting between folklore, fairy tales and rules and repetitions, it’s a gorgeously shot film, boasting Joan Plowright, Juliet Stevenson and Joely Richardson as the female trio and Bernard Hill as the suspicious coroner.

James Cameron’s blockbuster sequel Terminator 2: Judgement Day is a hell of a lot of fun: Linda Hamilton’s a great heroine, Schwarzenegger looks he’s having a blast and Robert Patrick is wonderfully sinister as T-1000 shape-shifting cyborg sent to ruin the day and the rest of the world. It’s fantastic set-piece after fantastic set-piece, with the effects still looking spectacular 30 years later. Plenty, on the other hand, is a provocative, divisive drama about an ex-fighter for the French Resistance who moves to post-war England to create a life for herself, no matter who is hurt along the way. Meryl Streep takes the lead, supported by Sam Neill, Charles Dance, Ian McKellen and more, with the script coming from David Hare. Another story about the turmoil of trying to get on a new path, Tanzanian drama Pili is a hard-hitting film about a single mother facing poverty who lands a chance to change it all – if she’s willing to risk a lot. What is Cinema? meanwhile sounds like a must for any cinephile: using hundreds of film clips, sound bites and ideas from the greats like Lynch, Hitchcock and Leigh, this documentary explores what cinema does, how it experiments and where it might go.

Friday might be a fine time to catch up on a few films that you’ve missed or you can dive into Tomas Alfredson’s slick adaptation of John le Carrè’s Cold War spy thriller Tinker, Tailor, Soldier, Spy. Gary Oldman steps into the shoes of George Smiley, an espionage veteran who’s forced out of retirement to search for a Soviet Agent within MI6. The top, top cast – and role list of suspects – include Colin Firth, Tom Hardy, Mark Strong, Benedict Cumberbatch, Stephen Graham, John Hurt and more. It’s sublime, understated filmmaking.