Duke Box #23: Our Guide to the Best Films on TV 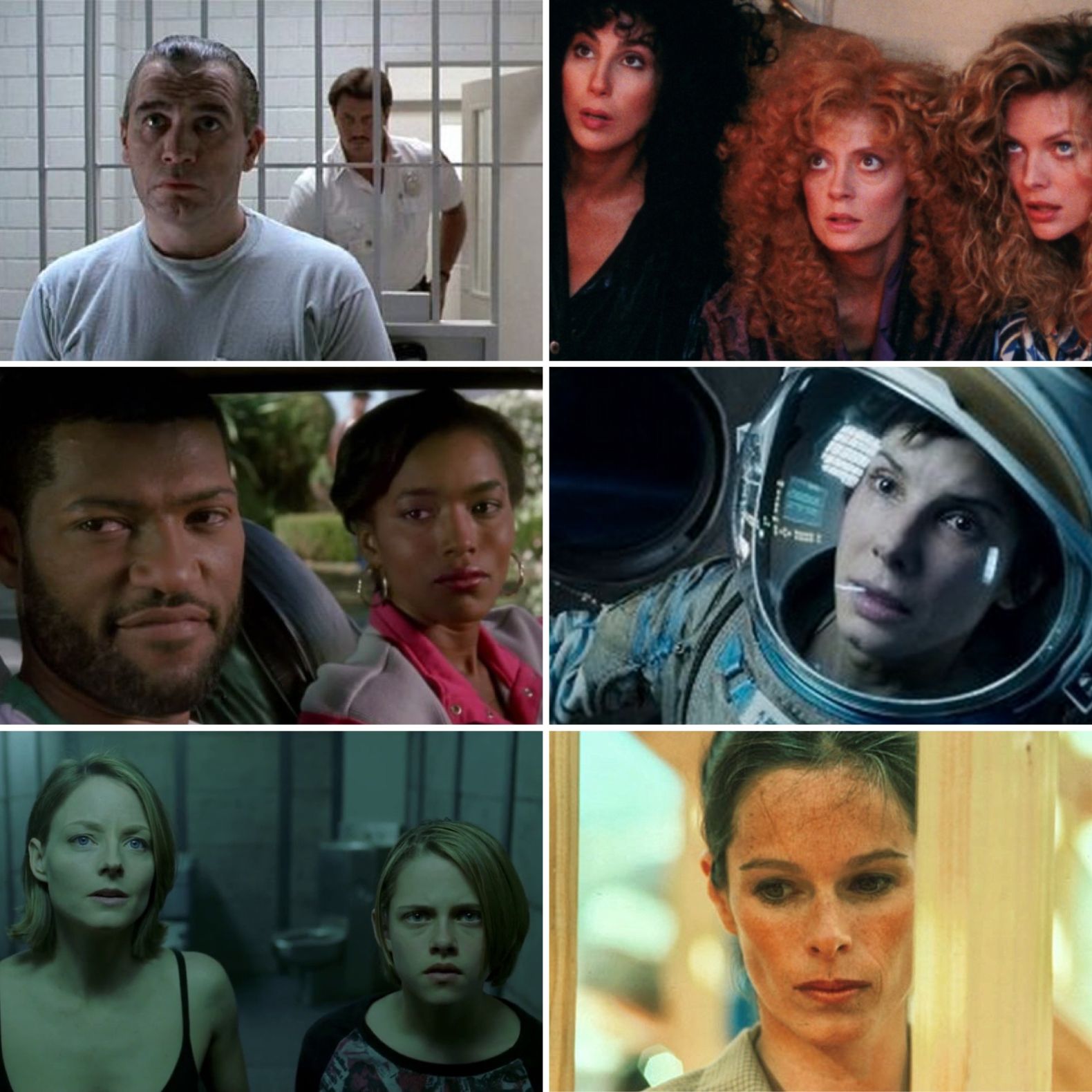 As with last week, there are a few more family films in here for the kids, although hopefully a few new ones for any adults who could do without sitting through the same ones AGAIN. Aside from that, there are a good number of indie flicks, some tasty thrillers and a pretty decent spread of tearjerkers too.

Pick of the Week goes to Manhunter, a thriller whose pretty conventional title belies that it's an adaptation of Thomas Harris' Red Dragon - and thus an early outing for Hannibal Lecter (Brian Cox got there before Anthony Hopkins did) - and that it's slickly directed by Michael Mann (Heat), who brings a bit of his Miami Vice background to the visuals. It's a genuinely suspenseful film and the great ensemble also includes William Petersen, Tom Noonan, Joan Allen and Dennis Farina.

Variation is the spice of life in today’s listings, evident enough in the trio of films that fill the afternoon. Julia Roberts and Jacob Tremblay (the Oscar-nominated star of Room) are excellent in tender drama Wonder, which follows a young boy with a rare medical facial condition as he tries to settle into school. It sounds quite sentimental, and it does tug on the heartstrings, but it’s so charmingly constructed that it avoids being cloying. Elsewhere, early Ealing meets crime-adventure-for-kids in Hue and Cry (not the 80s pop band), which sees Alistair Sim as a dastardly crook who’s foiled by a gang of street boys, whilst Disney’s Wreck-It Ralph is both great fun for the kids and a huge dollop of nostalgia for the adults in its tale of a video game villain who sets out to be a hero. Sandra Bullock and George Clooney star as astronauts in peril in Alfonso Cuarón’s Gravity, a simply spectacular-looking story of survival featuring stunning effects, emotional beats and a wonderful, wonderful score by Steven Price (really recommend listening to it). There’s excellent drama in John Singleton’s influential 90s hit Boyz in the Hood, starring Cuba Gooding Jr. and a brilliant Laurence Fishburne (hard to believe it’s nearly twenty years old), whilst Timothy Dalton makes for a fantastic Bond in Licence to Kill. Julie Walters and Python director Terry Jones combine for suburban brothel comedy Personal Services, inspired but not based on the experiences of Cynthia Payne, while much later in the evening (too late for any child that would want to watch it) there’s Marvel’s Avengers: Age of Ultron, not its strongest but notably featuring a delicious voice performance by James Spader.

Step into the Lake District on Sunday morning with the sweet biopic Miss Potter, starring Renee Zellweger as the beloved Beatrix. It’s an acting masterclass in divorce drama Kramer vs Kramer just before noon, with Dustin Hoffman and Justin Henry making a dynamic father-and-son duo, while Meryl Streep won her first Oscar (Best Supporting Actress) for her thoughtful performance as the mother who wants out. There’s more Bond in the afternoon with A View to a Kill, which stars Christopher Walken, Grace Jones AND a Duran Duran theme. Gary Cooper and Burt Lancaster star in Robert Aldrich’s gritty Western Vera Cruz, a film whose amoral characters and apathy was an early influence on several similarly cynical vehicles, including The Wild Bunch. Fans of motor racing might want to check out Le Mans starring Steve McQueen, a film that’s so documentary-like that it features real race footage, while there’s horse-training and horse-racing aplenty in prestige fare Seabiscuit, a film starring Tobey Maguire, Jeff Bridges and Chris Cooper that’s loosely inspired on the life and racing career of Seabiscuit, a horse deemed to have no chance. Jodie Foster and a young Kristen Stewart star as a mother and daughter trapped in the Panic Room of their new home by burglars in David Fincher’s suitably claustrophobic, suspenseful and Hitchcockian thriller. Later in the evening, there’s the big-screen adaptation of Markus Zusak’s beloved The Book Thief, which follows a young girl in Nazi Germany who is taught to read and love stories by the Jewish man that her adoptive parents are harbouring in their basement. There’s another emotional story, albeit quite different, in The Notebook – an unashamedly sentimental romance that will have some rolling their others and others sobbing into their pillows. I refuse to let you in on which camp I fall in.

Between Anthony Hopkins’ Oscar-winning turn and Mads Mikkelsen’s seductive TV portrayal, Brian Cox’s take on Hannibal Lecter (or Lecktor, as spelt here) is sometimes forgotten – and it shouldn’t be because Manhunter is a great adaptation of Thomas Harris’ Red Dragon, the prelude to The Silence of the Lambs. Directed by Michael Mann (Heat), its mix of chic stylisations and gripping suspense make it a must-see, even if the synth on the soundtrack are a bit of their time. I’ve highlighted The Hobbit before but this is a much kinder time and leads into Tuesday’s screening of the follow-up. You might want to stay on Film4 for back-to-back American indies: Miranda July’s Me and You and Everyone We Know, a romantic-comedy-drama of intertwined stories (featuring July and indie gem John Hawkes), and Mistress America, a mischievous, sometimes pointed comedy about as a lonely college freshman (Lola Kirke) whose life is turned upside down by her adventurous stepsister-to-be (Greta Gerwig).

The Hobbit: Desolation of Smaug follows on where the previous day’s Middle Earth adventures began (though curiously Battle of the Five Armies isn’t appearing this week). If you’re looking for something more low-budget, claustrophobic and closer to home, however, documentary Last Breath tells the quite incredible story of a deep-sea diver’s fight for survival after being left stranded on the seabed with just five minutes of oxygen left. After midnight, Geraldine Chapman stars as a young woman, newly released from prison, who tries to turn her life around but becomes obsessed with Anthony Perkins’ construction worker in Remember My Name, a Robert Altman-scripted film that also stars a young Jeff Goldblum and Alfre Woodard (try to keep to Fame lyrics out of your head though). Finally, there’s more Miranda July indie quirk with The Future, where she plays half of a struggling couple who decide to adopt a stray cat – a decision that changes their perspectives on life entirely.

Over the Hedge is a quite a deceptive family film – there’s enough brightness, cute animals and fun hijinks to keep the little ones occupied, but it also slyly satirises consumer culture and promotes a ‘look after the environment’ message. Plus, any fans of Christopher Guest comedies or Schitt’s Creek will get a kick out of Catherine O’Hara and Eugene Levy as a porcupine married couple. Una is a lot darker, with Rooney Mara as a woman who seeks out the older man (Ben Mendelsohn) she planned to run away with as a teenager. It’s not an easy watch but is a nevertheless gripping consideration of the aftermath of statutory rape. There’s more tension in political thriller The East, which features a pretty incredible cast, including Brit Marling (who later worked with director Zal Batmanglij on Netflix’ The OA), Alexander Skarsgård, Ellen Page, Toby Kebbell and Patricia Clarkson, in a story about a woman tasked with infiltrating an anarchist group who target major corporations for their covered-up crimes.

There’s another treat for the kids in Rise of the Guardians, a charming animation about a group of Immortal Guardians – Jack Frost, Tooth Fairy, Santa –  who must band together against an evil spirit to protect the innocence and imagination of children across the world. It boasts a fine voice cast, including Hugh Jackman, Jude Law and Chris Pine. A familiar piece of American history gets the big screen treatment again in John Sturges Hour of the Gun, with James Garner giving a layered performance as Wyatt Earp and Jason Robards starring as Doc Holliday. The film is noted for being one of the most historically accurate renditions of the Clanton and O.K. Corral gunfights. In the evening, there’s the big screen adaptation of Evelyn Waugh’s Brideshead Revisited, penned by Andrew Davies (television’s Pride & Prejudice and Bleak House). Being an abridged and brisk version, it doesn’t come close to the 1980s miniseries, starring Jeremy Irons, but it is a fine introduction to Waugh and does boast great performances from Emma Thompson, Michael Gambon and a young cast including Ben Wishaw, Matthew Goode and Hayley Atwell.

Deborah Kerr stars opposite Brief Encounter’s Trevor Howard as an Irish woman recruited to spy for the Nazis in WWII thriller I See a Dark Stranger, which is a far cry tonally from the trio of films lined up for the evening. Guillermo del Toro’s comic-book sequel Hellboy II: The Golden Army features the filmmaker’s glorious eye for design and spectacle, with a cigar-chomping Ron Perlman ready to save the day from a malicious, mythical prince played by Luke Goss (yes, that Luke Goss!). George Miller’s horror-comedy The Witches of Eastwick sees Cher, Susan Sarandon and Michelle Pfieffer inadvertently summon Jack Nicholson’s enigmatic, chaotic and weirdly seductive outsider to their quiet town and lives. Tip: don’t eat cherries while watching. Finally, there’s biting satire and aliens on earth but drifter Roddy Piper is the only person who sees them thanks to his unique pair of sunglasses, in cult sci-fi-action They Live, directed by the great John Carpenter (Halloween, The Thing).