Duke Box #22: Our Guide to the Best Films on TV 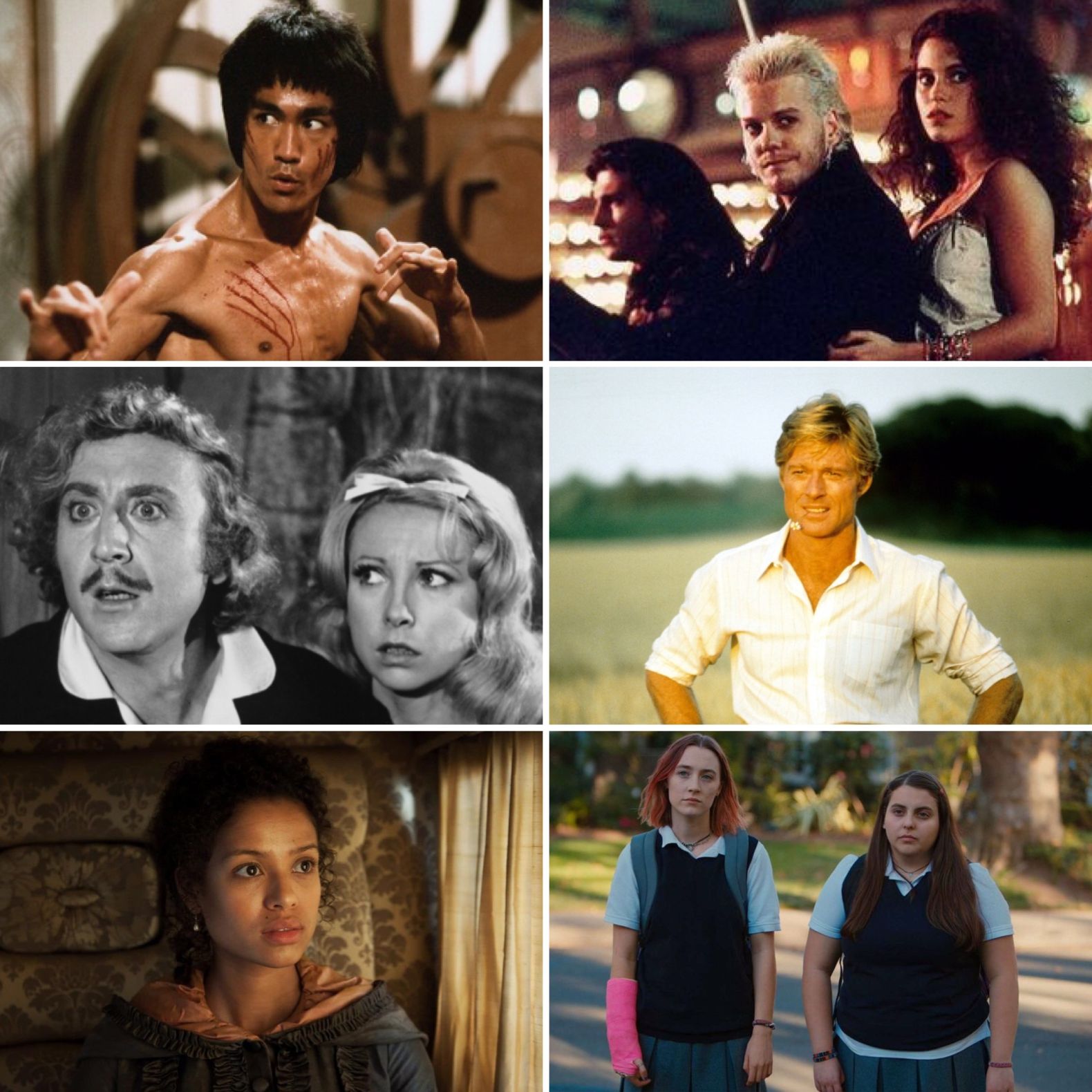 With the kids still off, I've included a few more family films in this week's - including a couple of nostalgia-fests from when I was little. Other than that, it's a real mixture across the week, although it's worth highlighting here that Friday looks absolutely sublime.

I've gone for one of the smaller films for Pick of the Week - We Are The Best!, which is just such a wonderful film about the relationship between growing up, the love of music and your best friends.

This week’s recommendations kick off with one of our team’s favourite films from the past few years: Whit Stillman’s wickedly funny Love & Friendship, a playful adaptation of Jane Austen’s unpublished novella Lady Susan. Kate Beckinsale is great as a scheming widow, but Tom Bennett steals the film from everyone. Highly recommended, even if period films aren’t your usual thing. There’s a collection of films for the kids to enjoy, with British flick Zoo, the (true) story of a widow and a teenager who harboured a baby elephant in the backstreets of Belfast during the Blitz, animated monster-pastiche Hotel Transylvania (one for the smaller ones, perhaps) and the big screen adventures of one of Britain’s most beloved double-acts in the simply brilliant Wallace & Gromit in the Curse of the Were-Rabbit – a hoot. The latter two dip into the horror genre for comedic effect, but there are more traditional scares and chills on show in Drag Me to Hell (directed by The Evil Dead’s Sam Raimi), about a woman hit by a supernatural curse, and Insidious, one of the more popular haunted house horrors in recent years and one to watch if you love a decent jump scare. (There’s also Marc Forster’s zombie-action film World War Z, starring Brad Pitt, on Channel 4 in the evening, but, as a cautionary note, it is about a pandemic, so might not feel too comfortable to watch right now.) Then, just after midnight, there’s Young Frankenstein, Mel Brooks’ almighty spoof that pays homage to classic gothic tales whilst filling the screen to the brim with one-liners, fantastic performances and even a song-and-dance number. It’s a Dukes favourite. In between those, there’s also the chance to see Marvel’s Guardians of the Galaxy for some intergalactic comic-book action, WWII drama The King’s Choice, depicting the decisions and actions the Norwegian monarchy faced when Germany invaded in 1940, and Cate Shortland’s thriller Berlin Syndrome, which sees an Australian tourist’s holiday romance turn sinister when she realises she is unable to leave her lover’s apartment.

James Stewart takes on a crooked lawman in western The Far Country on Sunday morning, before Mia Wasikowska takes on the iconic titular role of Jane Eyre in True Detective director Cary Joji Fukunaga’s adaptation of Charlotte Bronte’s classic novel, which also sees Michael Fassbender step into the shoes of the gruff, secretive and volatile Mr Rochester. Regarded as one of the great war (and anti-war) films of all time, and based on true events, the gritty Twelve O’Clock High sees Gregory Peck star as general overseeing a demoralised air-bomber unit tasked with carrying out daylight bombings against Nazi Germany. There’s much more melodrama and romance in the swooning sweep of Legends of the Fall, a beautifully shot film about a close-knit family living in the wilderness of early 20th century America, whose unconventional idyll is shattered by betrayal and war. The fine cast includes Brad Pitt, Anthony Hopkins, Aidan Quinn and Julia Ormond. There’s another fine-working ensemble in Dustin Hoffman’s gentle comedy Quartet, with Maggie Smith, Tom Courtenay, Billy Connolly and Pauline Collins all starring as residents in a retired home for musicians. Finally, the late, great Philip Seymour Hoffman leads a cast that includes Rachel McAdams, Robin Wright and Willem Dafoe in espionage thriller A Most Wanted Man, Anton Corbijn’s sleek adaptation of John le Carré’s novel. This was Hoffman’s final leading role before he died and it’s a great reminder of the nuance that he brought to every role.

Shrek spin-off Puss in Boots doesn’t break new ground in its storytelling, but it has enough panache, wit and fun to keep the kids entertained, whilst Antonio Banderas’ voicework is both wonderfully charming and tongue-in-cheek. There are more sombre tones in James Gray’s crime-drama We Own the Night, which sees a nightclub owner (Joaquin Phoenix) try to save the lives of his NYPD brother (Mark Wahlberg) and father (Robert Duvall) from Russian Mafia.

I’ll level with you: Dragonheart is not a brilliant film. However, when I was little, I watched it over and over again, because I was in love with the story of a talking dragon (voiced by Sean Connery), a cynical knight (Dennis Quaid) and an evil King (David Thewlis). It’s bonkers and cheesy, but it’s pretty great viewing when you’re a kid. Elsewhere, there’s a very fine run of films to settle yourself down for in the evening, beginning with Belle, a film inspired by the story of Dido Belle, a biracial aristocrat in 18th century Britain. Gugu Mbatha-Raw’s breakout performance is wonderful, whilst the fine supporting cast also includes Tom Wilkinson, Emily Watson, Miranda Richardson, James Norton and more. There’s more historical license at play in Ridley Scott’s Oscar-winning epic, Gladiator, starring Russell Crowe as a former Roman general turned slave who rises through the ranks of the arena in a bid for vengeance against the cruel Emperor Commodus (a wonderfully petulant Joaquin Phoenix). Hans Zimmer’s score, particularly the tracks featuring Lisa Gerrard, is glorious. Then, at close of play, and one to catch on All 4 if this is too late at night for you, there’s Swedish film We are the Best!, a charming film about three girls in 1980s Stockholm who set out to form a punk band – despite not knowing how to play an instrument. It’s joyful, relatable and quietly thoughtful about finding yourself as a teenager.

Jason Clarke, Josh Brolin and Jake Gyllenhaal star in Everest, based on the real events of the 1996 Mount Everest blizzard disaster and the expedition groups caught up in a fight for survival on the unforgiving landscape. Between its effects and cinematography, it’s visually spectacular. South Africa-set sci-fi District 9 also takes inspiration from true life, drawing thematically on apartheid and segregation in its story of a government agent, tasked with relocating aliens from their deteriorated camps, who finds himself in need of their help when he’s exposed to a strange chemical. Director Neill Blomkamp’s found-footage style is sharp, adding a twist to the story – and making for quite emotional viewing amongst the action. In the middle of the night (and so hopefully on catch-up), there’s Menashe, a tender and moving Yiddish-language American indie that tells the story of a widowed Hasidic Jewish man who’s trying to regain custody of his son.

Virginia McKenna stars as real-life spy hero Violette Szabo in Carve Her Name with Pride, a film that slightly sanitises some of the brutality that Szabo faced on her missions (it is rated U after all), but nevertheless tells a vital story of a woman who risked everything to help fight the Nazis. Quentin Tarantino offers his own version of WWII in Inglorious Basterds, an audacious film set in an alternate Nazi-occupied France that follows different strands of vengeance and loss. The cast is unsurprisingly excellent, including Mélanie Laurent as a woman looking to avenge her family, and an Oscar-winning Christoph Waltz as ruthless SS officer Hans Landa. On at a similar time is Hounds of Love, an Australian thriller about a teenager girl who’s kidnapped by a disturbed married couple and comes to realise that cunning mind games is her only chance of survival. The tender poetry of Kate Bush this aint.

This is a pretty incredible day for picking a film to watch and I don’t envy you your choice. Early in the day is easy enough: FernGully: the Last Rainforest’s animation looks a little dated now (which makes me feel my age), but its environmentalist storyline and the voice performances of sidekick Robin Williams and Tim Curry as the evil Hexxus will keep kids entertained. Robert Redford, Robert Duvall and Glenn Close star in The Natural, a charming, breezy afternoon film about a middle-aged unknown who surprises everyone by becoming a baseball superstar. Then, in the evening, well. Greta Gerwig’s glorious Lady Bird gets a prime slot for Saoirse Ronan and Laurie Metcalf to show why this story of a 17-year-old preparing to leave home, and the inevitable clashes with her mother, caught everyone’s attention a few years back. (We still talk about Metcalf’s performance in the office: she’s glorious.) People are strange and the boardwalk is stranger in cult 80s horror-comedy The Lost Boys, which sees Kiefer Sutherland heads up a gang of young(looking) vampires on the Californian coast. There’s a Tom Ford double-bill on Sony Movies, with dark thriller Nocturnal Animals, starring Amy Adams and Jake Gyllenhaal, and the mesmerising A Single Man, with Colin Firth at his very best as an English professor grieving the loss of his lover. Bruce Lee’s final completed film Enter the Dragon showcases the star’s martial arts skills and on-screen charisma, whilst British indie The Levelling tells the story of a trainee veterinarian’s emotional journey of reckoning when she returns to her family home and a fractious relationship with her father.