Duke Box #17: Our Guide to the Best Films on TV 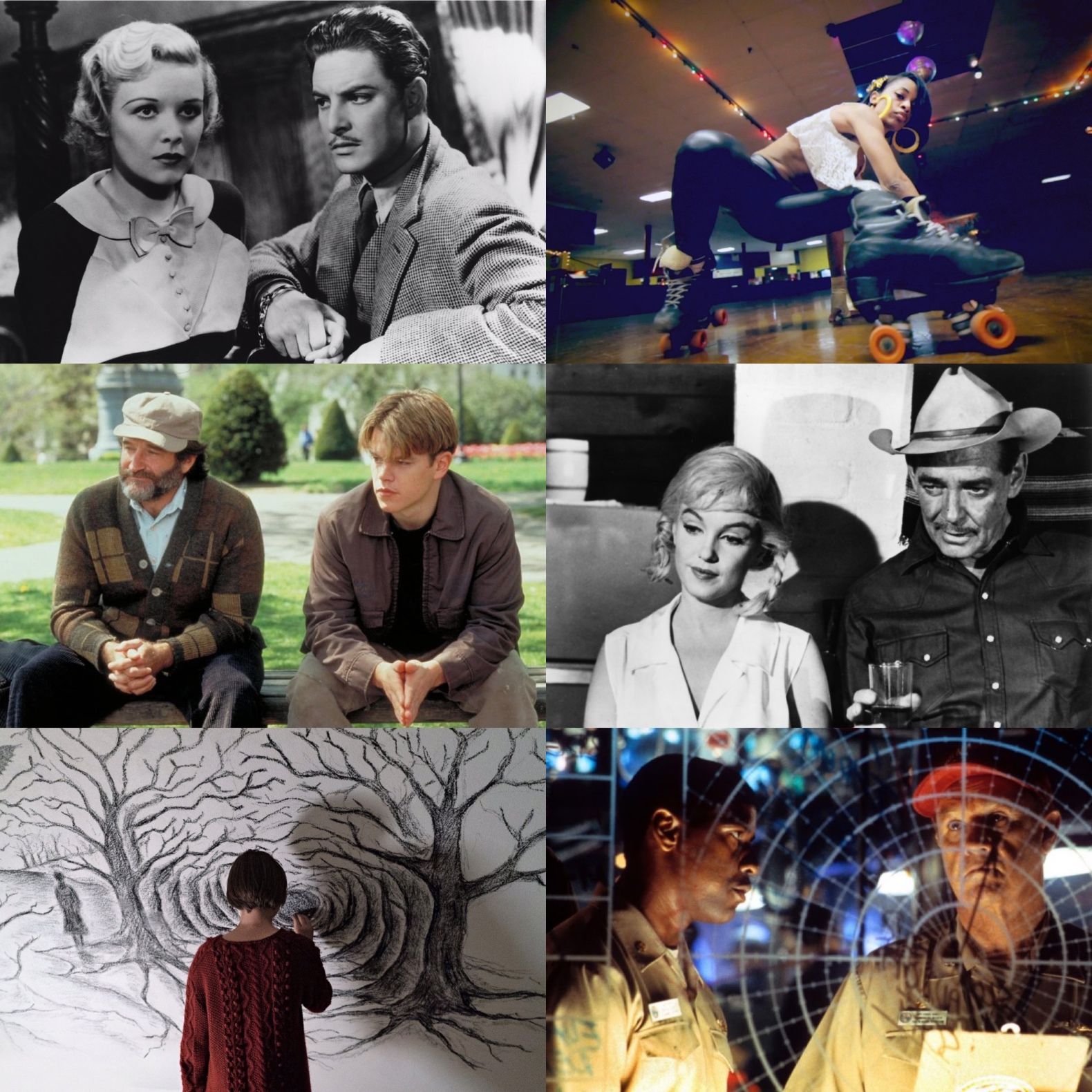 Settle down for some wonderful cinema moments, exquisite storytelling and performances that will last the test of time (a special mention to Robin Williams in Good Will Hunting). Just a quick glance at Saturday's listings will let you know that narrowing down to Pick of the Week is difficult. I think I'll have to flip a coin between The 39 Steps, an espionage film that's one of Hitchcock's finest (and which should hopefully make its way onto iPlayer if you see this after it's screened) and, John Huston's The Misfits, the final film of both Marilyn Monroe and Clark Gable.

What a way to start this week’s listings: Alfred Hitchcock’s wonderful spy mystery The 39 Steps is one of the director’s finest, packed with twists and turns as a civilian finds himself forced to go on the run after being caught in the middle of attempted espionage. Robert Donat and Madeline Carroll make a fantastic double-act; Orson Welles called the picture a ‘masterpiece’. For some teatime family viewing, Pixar prequel Monsters University makes a welcome return to beloved characters Mike (Billy Crystal) and Sully (John Goodman) – only back when they were college rivals, not best friends. Then there are a couple of 90s classics to enjoy, beginning with The Truman Show, directed by Peter Weir (Witness, Dead Poet’s Society) and featuring a remarkable performance form Jim Carrey as an insurance salesman who discovers that his whole life is one big reality TV show. There’s more excellent acting on show in Good Will Hunting, including an Oscar-winning Robin Williams as a psychologist who looks to help a janitor (Matt Damon) who has a prodigal gift for mathematics but a directionless life. Damon picked up an Oscar nod for his performance and a win for Best Screenplay for the script he co-wrote with Ben Affleck. Jumping ahead to after midnight, mathematical genius also plays a significant part in British indie film X + Y about a socially awkward teen who finds a new lease of life when he’s chosen to represent the UK at an international tournament. Asa Butterfield (Hugo) takes on the lead role, with Rafe Spall, Sally Hawkins and Eddie Marsan co-starring. Back to 9pm and alongside Good Will Hunting there’s also a chance to see J.J. Abrams’ revamp of Star Trek, with Chris Pine, Zachary Quinto, Sean Pegg, Zoe Saldana, Karl Urban, John Cho and Anton Yelchin stepping onto the newly commissioned USS Enterprise, as well as Sean Connery’s 007 facing off with villain Robert Shaw in Bond classic From Russia with Love. There’s more action – albeit even more ludicrous – in Arnold Schwarzenegger vehicle Commando, which sees his retired Special Forces colonel try to rescue his kidnapped daughter from his former subordinate. It’s absolutely ridiculous but an ‘80s action gem – expect big muscles, one-liners and OTT stunts.

Spend your Sunday morning with some charming animation and pure escapism in Moomins on the Riviera, which sees the beloved Moomins (and Snorkmaiden and Little My) enjoy a glamorous break in the South of France. Meanwhile, just after noon, there’s Ealing Studios comedy Passport to Pimlico about residents in a part of London who discover an old treaty and declare independence. Starring Stanley Holloway and Margaret Rutherford, the film was released in 1949 – a peak year for the studio, which also saw Whisky Galore! and Kind Hearts & Coronets play in cinemas. Michael Caine makes his first appearance as spy Harry Palmer in espionage thriller The Ipcress File, regarded as the antithesis of Bond’s excessiveness. There’s a repeat of its follow-up, Funeral in Berlin, on Thursday afternoon (the third film, Billion Dollar Brain, is largely panned but you can also see it on Talking Pictures TV on…). There’s a late, late night screening of Howard Hawks’ sci-fi-horror film The Thing from Another World – the first adaptation of John W. Campbell’s novella, which John Carpenter would later turn into The Thing. I personally prefer watching these kinds of films in the early hours of the morning but I’ve also highlighted a kinder morning time on Friday too. Also on in the middle of the night is Icelandic comedy-drama Rams, about two estranged brothers who have to reunite after forty years apart to save their beloved sheep. Starring Under the Tree’s Sigurður Sigurjónsson, it’s a touching, oddball gem that hopefully also becomes available on All4.

Before delving into the thrills, spills and tension of this evening’s feature films, it’s worth mentioning Storyville documentary United Skates. Roller skate rinks may not be the cultural phenomenon in the UK that they are in the US, so it’s a fascinating look at the history and societal impact of these attractions and rise to save an underground culture when the last few are threatened with closure. Elsewhere, before The Matrix there was Bound, the Wachowski’s neo-noir thriller which sees Gina Gershon’s tough ex-con fall for gangster’s girlfriend Jennifer Tilly & plot to steal millions of mob money with her (I have no idea why it’s on The Horror Channel when it’s patently not a scary film, but there we are). A late-night double bill on Film4 begins with the claustrophobic, Hitchcockian-influenced Buried, starring Ryan Reynolds as a kidnapped man who wakes in a coffin and faces a desperate race against time to escape. That’s followed by the quietly brilliant Sicilian Ghost Story, whose dark real-life story of a boy who vanishes is told through the eyes of his infatuated classmate and her rebellious journey into the fantastical, enchanted Sicilian forests. Finally, thriller The Nile Hilton Incident explores a murder investigation and police corruption against the backdrop of the Egyptian Revolution.

Tragically the final picture for both Marilyn Monroe and Clark Gable, John Huston’s The Misfits (also written by Arthur Miller) had a troubled production and release but has since gained a reputation as a lost masterpiece. Combining drama, romance and Western as Monroe’s divorcee falls for Gable’s troubled over-the-hill rodeo star, the film crackles with arguably the two stars’ finest performances. Denzel Washington stars as a young Officer who stages a mutiny against a trigger-happy Captain (Gene Hackman) onboard a US nuclear missile submarine in Tony Scott’s tense action-thriller Crimson Tide; the cast also stars Viggo Mortensen and James Gandolfini. Finally, Nico, 1988 offers a unique, half-imagined look at the last year of the life of the German singer Nico, who acted for Federico Fellini and Andy Warhol, sung with The Velvet Underground and performed as a solo artist. The film was a passion project for Danish actress Trine Dyrholm (The Commune, In a Better World) who shines in the title role.

An ensemble cast including Adam Driver, Daniel Craig, Channing Tatum and Riley Keogh (to name a few) look like they’re having a ball in Steven Soderbergh’s heist comedy Logan Lucky, which sees two brothers attempt to pull off an elaborate robbery during a NASCAR race. Meanwhile Charlie Kaufman’s stop-motion animation Anomalisa follows one lonely man who sees everyone as identical until he meets a unique woman in a hotel. Another innovative exploration of human emotion from the writer behind Eternal Sunshine of the Spotless Mind and Being John Malkovich, its voice cast only features David Thewlis, Jennifer Jason Leigh and Tom Noonan.

As promised, here’s the morning screening of The Thing from Another World – but if that’s not your thing, there’s David Lean’s aviation drama The Sound Barrier, written by Terence Rattigan, starring Ralph Richardson and loosely inspired by the real life story of aircraft designer Geoffrey de Havilland, inventor of the Mosquito warplane. Then in the evening there’s one of the films of the week with the sublime 20th Century Women, a wonderful indie about a teenage boy growing up in 1970s California and the women who help raise him. Partly inspired by director Mike Mills’ own upbringing, the film features fantastic performances from Annette Bening (robbed of even an Oscar nomination), Greta Gerwig and Elle Fanning. There's also an excellent bonus in its fantastic soundtrack, which leans heavily on the Talking Heads.