Duke Box #18: Our Guide to the Best Films on TV 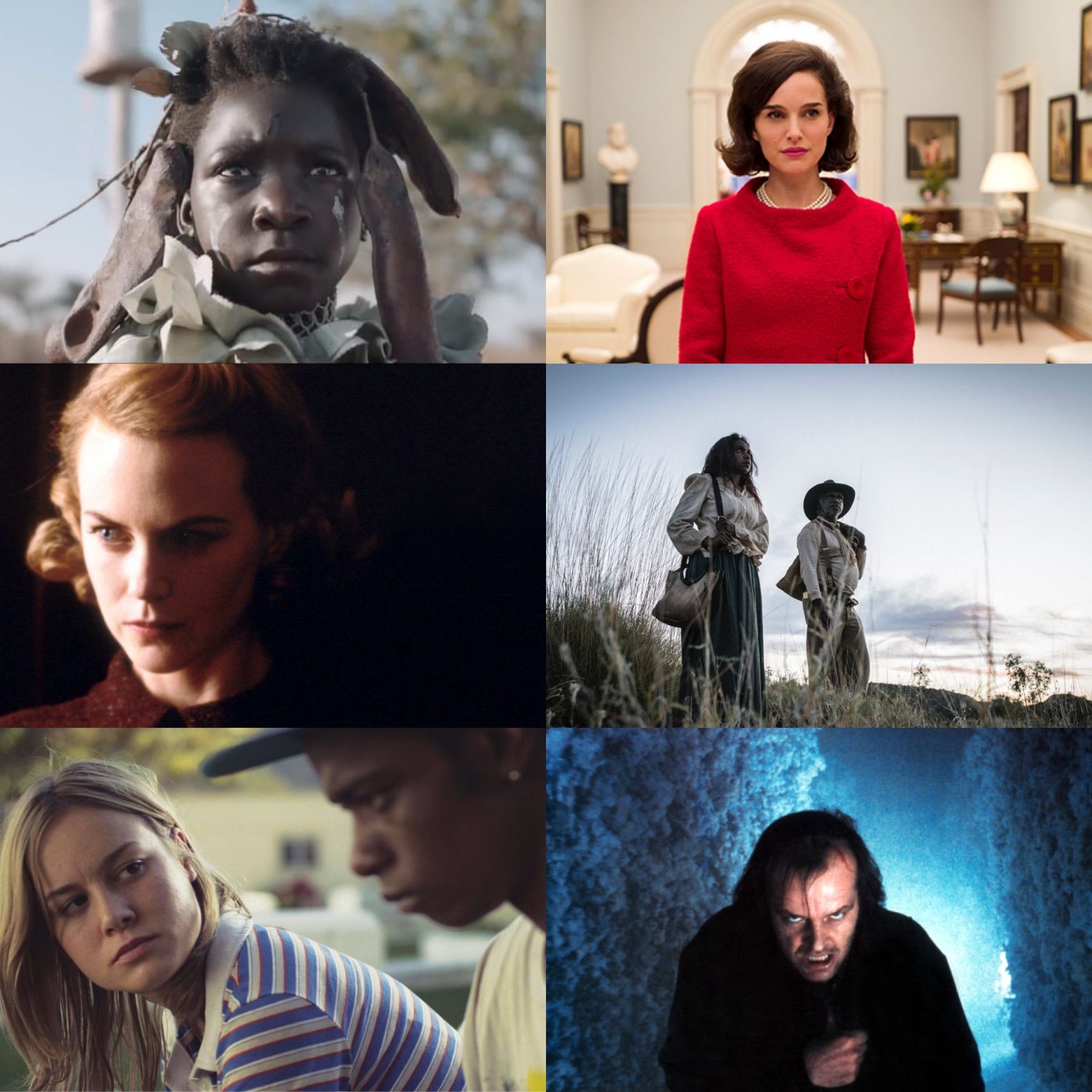 There are a few trends in this week's collection of listings: the thrills and chills found in horrors like The Shining, Peeping Tom and The Others, spectacular visuals (from the direction of Jackie, to the design of Tale of Tales), excellent indies and smaller features from the past few years, such as the brilliant Short Term 12 and hard-hitting Australian drama Sweet Country (which made our Top 18 of '18 a couple of years ago). Hope you enjoy delving into some treats.

The afternoon sees Steve McQueen and Faye Dunaway in the original version of heist film The Thomas Crown Affair, known for the lead actors’ scintillating chemistry and an Oscar win for Noel Harrison’s woozy theme ‘Windmills of Your Mind’. I’m yet to see casting in a live-action Disney film top Glenn Close as Cruella de Vil but Angelina Jolie as Maleficent is up there in an often surprising and layered reimagining of the Sleeping Beauty villain. There’s a plethora of films to choose from in the evening: the tragic chaos of the Gulf of Mexico oil spill is recalled in action-thriller Deepwater Horizon, 007 takes on SPECTRE’s second in command in Bond film Thunderball, Keira Knightley stars alongside Ralph Fiennes in the story of the adored and scandalised Georgiana Spencer in The Duchess, and Frances McDormand took home her second Oscar for her role as an angry, vengeful, grieving mother out for justice in the provocative and divisive Three Billboards Outside Ebbing, Missouri. There’s more to come after that too. Dan Aykroyd and John Belushi star as The Blues Brothers, a film packed with cameos from soul music icons, including Aretha Franklin, Cab Calloway and Ray Charles. David Cronenberg’s Map to the Stars, meanwhile, is a salty satire about Hollywood and L.A. life, the pursuit of fame and ghosts from the past, starring Julianne Moore and Robert Pattinson.

However, the two biggest highlights of the day come at its close. Pablo Larrain’s inventive and gorgeously shot Jackie sees Natalie Portman deliver a quite incredible performance as Jackie Kennedy in the aftermath of JFK’s assassination. Mica Levi’s score is one of the best in recent years. Finally Short Term 12, an indie about disenfranchised youth that features a prescient and astonishing cast, including future Oscar winners Brie Larsen and Rami Malek, as well as John Gallagher Jr (10 Cloverfield Lane), Kaitlyn Dever (Booksmart), Lakeith Stanfield (Sorry to Bother You) and Stephanie Beatriz (Brooklyn Nine-Nine). It’s pretty powerful, moving and often quite frank – well worth catching up on.

Michael Caine, Sylvester Stallone and Max von Sydow are joined by Pele, Bobby Moore and Ossie Ardiles (what a line-up) in John Huston’s Escape to Victory, a film about interned Allied prisoners of war who play an exhibition football match against a German team, whilst Russell Crowe takes to the high seas in Peter Weir’s spectacular Napoleonic War-era epic Master & Commander. Crowe and Weir’s Australian compatriot Nicole Kidman has a sublime showcase for her skills in the unnerving and atmospheric ghost story The Others, a film whose eclectic cast also features Fionnula Flanagan, Christopher Eccleston and Eric Sykes. Chris Pine and Ben Foster star as brothers who turn to bank-robbing to save their family home in the quietly brilliant Hell or High Water, written by Sicario’s Taylor Sheridan. A naïve young Irish woman has a love affair with a sophisticated older man in tender drama Girl with Green Eyes, before an after-midnight screening of Queen & Country, John Boorman’s long awaited sequel to Hope and Glory (1987), inspired by his own life growing up during and after WWII.

Danny Kaye, Virginia Mayo and Boris Karloff make a charming combination in The Secret Life of Walter Mitty, a fantastical comedy about a hapless dreamer who finds himself stumbling into a sinister conspiracy, whilst Henry Fonda, Richard Widmark, Dorothy Malone and Anthony Quinn star in western Warlock, a layered exploration of law, morality and leadership that follows a famous gunslinger-turned-marshal and a former gang-member-turned-deputy who each try to protect a town from criminals. From shoot-outs to murder, film noir Crossfire, starring Robert Young, Robert Mitchum and Gloria Grahame, is a hard-hitting whodunnit that tackles bigotry and racism, and was the first ‘B Movie’ to ever pick up a Best Picture nomination at the Oscars. Matt Bomer stars in Walking Out, which sees a disconnected father and son forced into a fight for survival after a brutal encounter in the Montana wilderness. A timeless narrative that’ll hit home with fathers and sons, it’s a beautifully constructed indie (and an appearance from Bill Pullman is always welcome).

Three very different suggestions here, beginning with Carol Reed’s Odd Man Out, an inventive and tense film noir about the wounded leader of an Irish organisation trying to escape the police through the city of Belfast. It made James Mason’s career and was the first ever winner of the BAFTA for Best British Film. Late night film I am Not a Witch also scooped a BAFTA a few years back, this time for Outstanding Debut by a British Writer, Director or Producer for filmmaker Rungano Nyoni. It’s a captivating film, full of stunning visuals, deadpan humour and drama, about a little girl accused of witchcraft and is inspired by real stories in Zambia. Sandwiched in between the two is a truly remarkable ensemble in black-comedy What a Way to Go!, which follows Shirley MacLaine’s four time widow who only wants love but keeps winding up with inheritances. She’s joined by Paul Newman, Robert Mitchum, Dean Martin, Gene Kelly and Dick Van Dyke.

Joan Bennett and James Mason star in the story of a housewife who goes to desperate measures to protect her family from scandal in The Reckless Moment, a noir hit. For something a little more sweetness and light, there’s the Debbie Reynolds comedy My Six Loves, (Gower Champion’s directorial debut), about a Broadway actress who unexpectedly finds herself looking after six abandoned children. Albert Finney won an Oscar for his leading role in Tom Jones, a fun take on Henry Fielding’s classic novel of bawdy behaviour and social satire that’s directed by Don’t Look Back in Anger collaborators Tony Richardson and John Osborne. Daring at the time, it’s a little dated now but it cemented Finney as a talent for the ages. There’s more storytelling in Tale of Tales, a visually arresting collection of fairy tales for grown-ups inspired by the stories of Giambattista Basile. The fine ensemble includes Salma Hayek as a queen desperate for a child, Shirley Henderson as one of two elderly sisters yearning for youth and Toby Jones as a King whose fascination with a giant flea topples his relationship with his daughter. Definitely not for children.

A couple of old-school horrors bookend Thursday’s picks, featuring some titans of the genre. Boris Karloff stars alongside Bela Lugosi in The Body Snatcher, an adaptation of Robert Louis Stevenson’s short story (inspired by the Burke and Hare murders) produced by RKO and Val Lewton (who also co-wrote the film), whilst the evening’s The Curse of Frankenstein sees Christopher Lee in his first Hammer Horror film, portraying the monster that made Karloff famous. Peter Cushing co-stars as Victor Frankenstein. Pirate adventure film The Spanish Main cannonballs onto the screen in the afternoon with grand costumes, sets and swashbuckling, starring Casablanca’s Paul Henreid and Maureen O’Hara, the ‘Queen of Technicolor’ who enjoyed success elsewhere in the genre with The Black Swan (1942) and Against All Flags (1954). Then there’s Sweet Country, a quietly powerful, brutal and stunningly shot Australian neo-Western about an Aboriginal farmhand who is forced to go on the run after defending himself. Hamilton Morris, Sam Neill and Bryan Brown give wonderfully layered performances, whilst the landscape is an intimidating supporting character. A gem of recent years.

I didn’t know too much about One Touch of Venus before it popped up in the listings, but its madcap premise and unexpected casting is intriguing. A fantasy comedy, the film follows a young window dresser (Robert Walker) who kisses a statue of Venus, unexpectedly bringing her life (in the form of Ava Gardner) and kickstarting romance; think 1980s comedy Mannequin but without the Starship soundtrack. Meryl Streep leads a pretty wild ensemble in the ABBA musical juggernaut Mamma Mia!, which is a far cry tonally from the rest of the evening’s offerings. Psychological horror-thriller Peeping Tom was considered so controversial on release that it effectively ended the great Michael Powell’s career, yet it’s since gone on to be lauded as a masterpiece, cited by Martin Scorsese as an inspiration, compared to Hitchcock’s Psycho and named one of the best British films ever made. For more disturbances before bed there’s Stanley Kubrick’s take on Stephen King’s The Shining, another film that received mixed reviews on release only to go on to regarded as a classic, thanks to its masterful direction, iconic cinema moments and thrilling central performances. Finally, Clint Eastwood and Lee Van Cleef star as bounty hunters in Sergio Leone’s spaghetti western For a Few Dollars More, the highly regarded second film – but not direct sequel – of the Dollars Trilogy.