Duke Box #16: Our Guide to the Best Films on TV 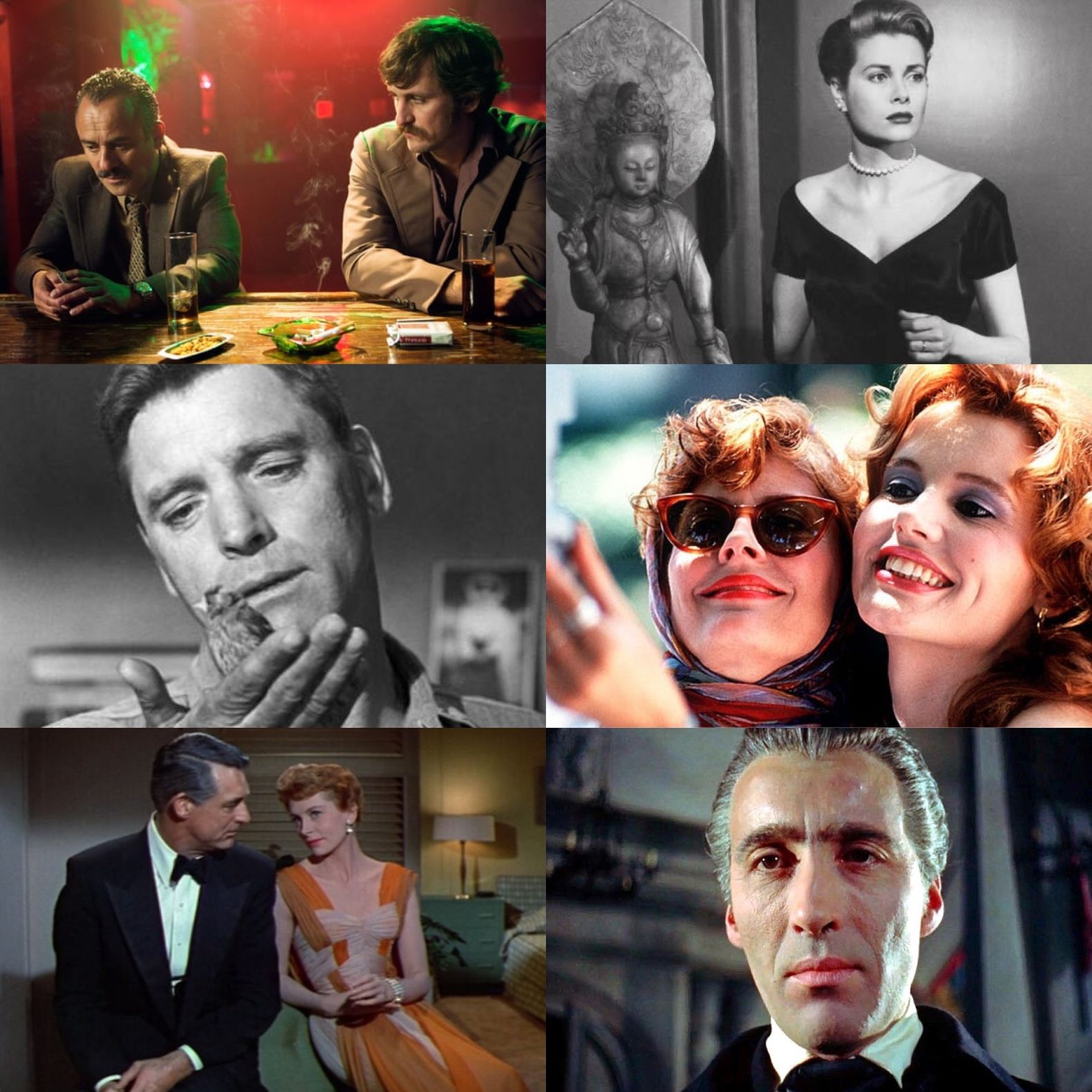 There's plenty to check out over the weekend, with what looks like a little something for everyone - family fun, crowd-pleasers, indies, classics, etc. The rest of the week might look slim in comparison but don't be fooled - there are still some treats to be had, from a few classics to some fairly recent hits, as well as a few critically-appreciated but perhaps under-seen films and some left field choices. A good number of the films on at the weekend also reappear at later times in the week if you want to spread some out.

I would say that Pick of the Week is The Straight Story, but it might not be on at the most convenient time (I'll keep an eye on that cropping up on All4 or on repeat for those who miss out), so instead I'll opt for a trio of foreign-language films: Two Days, One Night (incredible performance, quietly wrenching), Custody (not an easy watch but gripping) and Marshland (a fine detective thriller, wonderfully shot, tinged with a bit of gothic).

Saturday begins with a real treat from David Lynch – yes, a David Lynch film that is on TV during the day. Based on a true story, the incredibly beautiful and poignant The Straight Story follows one man’s long journey on his lawnmower to visit his sick brother. Richard Farnsworth was nominated for an Oscar; Sissy Spacek co-stars. The first of two live-action Disney films for the family to enjoy, there’s a surprisingly charming take on Pete’s Dragon (not one in the Disney canon to look back on fondly), directed by and starring The Old Man & the Gun collaborators David Lowery and Robert Redford. At tea-time, there’s The Jungle Book, featuring some spectacular visual effects and a great voice cast. It’s the 4th of July so inevitably there’s a screening of Independence Day: corny as anything, bombastic, a very entertaining blockbuster (and yeah, I do cry). Sean Connery has his first shaken-but-not-stirred martini as the OG Bond in the series’ first film, Dr. No, also featuring Ursula Andress. Cary Grant and Deborah Kerr make an irresistible combination in An Affair to Remember, a gorgeous technicolor about a couple intended for others who meet, fall in love and promise to meet again when they can. George Miller’s apocalyptic franchise hits new heights in the sequel Mad Max 2: Road Warrior, a fever dream of action. Finally, there are a couple of choices across the BBC channels – The Dardenne Brothers’ stunning Two Days, One Night, the story of a factory worker (Marion Cotillard) who has, well, two days and one night to convince her colleagues to give up their bonuses to save her job, and What Doesn’t Kill You, a drama inspired by director Brian Goodman’s own life about two childhood friends (Mark Ruffalo and Ethan Hawke) who turn to crime as a way to get by.

There’s a host of Oscar-winning actresses taking centre-stage today, both in and out of the roles that nabbed them their awards. Grace Kelly won Best Actress for her part in The Country Girl, a great drama co-starring Bing Crosby and William Holden that centres on the fiery relationship between a director, an alcoholic actor and the latter’s long-suffering wife. Tim Robbins’ true-life drama Dead Man Walking saw Susan Sarandon turn in an award-winning performance as Sister Helen Prejeun, a nun whose meetings with a man on death row (Sean Penn) lead to a complex examination of good, evil and morality. In the evening there’s another true story with Steven Soderbergh’s Erin Brockovich, which sees an Oscar-winning Julia Roberts star as a woman who takes on an energy corporation. Roberts also received an Oscar nod for her work in melodrama Steel Magnolias; the fantastic ensemble also includes Sally Field, Shirley MacLaine, Dolly Parton and Olympia Dukakis and you can expect laughs and lots of tears. Meanwhile, Reese Witherspoon, who picked up her statue for 2006’s I Walk the Line, shines superbly in Legally Blonde, a film whose fresh take on what could have been stereotypical comedy helped launch her career to new heights.

Elsewhere, Burt Lancaster has one of the roles of his career in Birdman of Alcatraz about a convicted murderer whose fascination with birds sets him on the path to redemption, whilst Andy Serkis continues to shine as leader Caesar in reboot sequel Dawn of the Planet of the Apes. There are also a couple of neo-noirs: 80s, B-movie tinged thriller F/X about a special effects guy hired to stage a gangster’s murder, and the 1980s’ set Spanish thriller Marshland, about two detectives investigating the disappearance of teenage girls in a backwater town. It’s a must for fans of True Detective.

Both from 1947 and both with a plot that hinges from the inability to recall a murder, melodramatic Western Pursued (starring Robert Mitchum, Teresa Wright and Judith Anderson) and British thriller The October Man, starring John Mills. Susan Sarandon and Geena Davis team up in Ridley Scott’s exhilarating Thelma & Louise, a film that added a fresh spin on both the buddy-road-movie and fugitives-on-the-run plot. It's a little dated in places now, but the duo have chemistry in spades, there’s a great supporting cast (including Harvey Keitel, Michael Madsen and a career-making role for Brad Pitt) and it's bold storytelling. Whereas Thelma & Louise is all about partnership, gripping French drama Custody follows the breakdown of an abusive marriage, a bitter custody battle and the son caught in the middle of it, resulting in a considered, suspenseful and wrenching piece of filmmaking.

The Lancashire set British classic Whistle Down the Wind sees a murder (Alan Bates) take refuge in a barn, only to be found by three children (including Hayley Mills) who believe him to be the second coming of Jesus Christ. Remarkably based on a true story, Penny Marshall’s Awakenings tells the story of a doctor in a 1960s Bronx psychiatric hospital whose use of a drug result in catatonic patients waking up and experiencing a whole new life. Robin Williams stars as the physician, whilst Robert De Niro delivers an accoladed performance as one of the patients. The late night double-bill on Film 4 moves from the uncanny world of artificial intelligence in Alex Garland’s Ex Machina, which sees Dohmnall Gleeson’s programmer visit the home of his CEO (Oscar Isaac) to test his latest creation (Alicia Vikander), to British drama Daphne, following Emily Beecham’s fantastic performance as a young woman whose life faces a huge transition after witnessing an incident.

Just the couple of picks to keep an eye out for today, both on Talking Pictures TV. A host of fine British talent appear in thriller-noir Time Without Pity, which sees Michael Redgrave star as a recovering alcoholic determined to save his son from hanging for the murder of his partner. In the evening, it’s all a bit Twilight Zone-y as Richard Burton stars as a novelist who causes tragic events just by thinking about them in The Medusa Touch (a great, campy name). The Omen’s Lee Remick co-stars in this psychological thriller.

Two very, very different films to take your pick from today, outside of the pretty fantastic line-up of films you can catch-up with. Slightly unevenbut nevertheless sweet rom-com The Wedding Singer fills itself with John Hughes nostalgia and 1980s aesthetic as it follows the relationship between Adam Sandler’s titular character and Drew Barrymore’s waitress. In the evening, a sharp pivot, as Christopher Lee takes on one of his most famous roles in Dracula, starring alongside Hammer Horror stalwarts Peter Cushing as Van Helsing and Michael Gough as Jonathan Harker.

A compelling ensemble, including Faye Dunaway, Max von Sydow, Malcolm McDowell, Orson Welles and Katharine Ross, star in the shocking true story, Voyage of the Damned, an account of the tragic 1939 German cruise liner filled with Jewish refugees escaping Nazi Germany. Mid-afternoon sees Michael Caine step back into the role of spy Harry Palmer for espionage sequel Funeral in Berlin, the follow-up to The Ipcress File. Andy Serkis is also reprising a role in War for the Planet of the Apes, a stunning sequel that’s gorgeously directed and scored, features fantastic performances and draws influence from classic war and western films, like Apocalypse Now and The Outlaw Josey Wales. Lauren Bacall, Betty Grable and Marilyn Monroe make for a fun trio of gold diggers whose expectations are turned on their head in How to Marry a Millionaire, whilst Pauline Collins stepped from stage to the big screen (collecting a BAFTA on the way) as Willy Russell’s Shirley Valentine. There’s some more British writing on after midnight with Meera Syal’s Anita & Me, inspired by her own teenage years in the Midlands. Finally, Cuban horror-satire Juan of the Dead leans into the political allegories that often feed the zombie genre, as a group of slackers take on an army of the living dead that the government and media write off as dissidents revolting (or, well, revolting dissidents…). Also worth pointing out – take a look at those repeats. There’s a fantastic line-up there in those alone – including a much nicer time to don your fishnets and do the Time Warp in your own living room.