Duke Box #15: Our Guide to the Best Films on TV 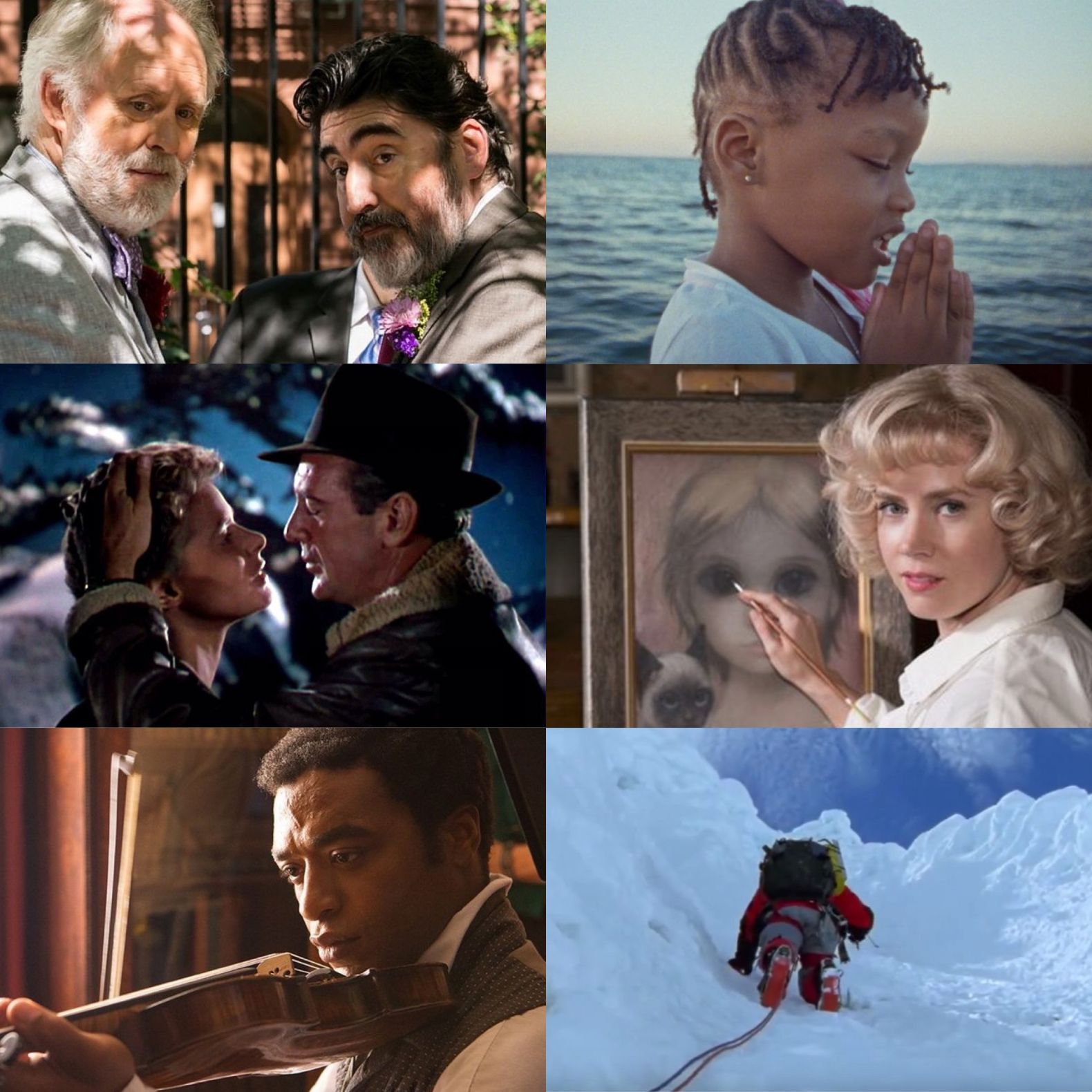 There's a healthy mix of big names, quieter titles, hard-hitting documentaries and lots of fantastic performances. For Pick of the Week, it's hard to look past the magnificent 12 Years a Slave, one of the finest films of the past decade and part of a Steve McQueen (director, not actor) double-bill on Film4 on Monday.  I'm still confused as to how Chiwetel Ejiofor didn't scoop all of the awards for his performance, to be honest! However, as a huge fan of Jean Arthur on screen, a supremely talented actress whose films aren't shown nearly enough, I'd like to also give a shout out to The Devil and Miss Jones.

(A reminder that this list isn’t exhaustive and that some films will be repeated at different times – these are just some titles that I've selected for various reason, hopefully at the best times. Some films may also change if channels decide to alter their listings.)

Today’s picks are all for the evening, beginning with a bit of Bond in Sam Mendes’ Spectre. It’s not the finest Daniel Craig outing, but it does feature a couple of great set-pieces and looks to be pretty key for upcoming release No Time To Die. Just after 9, Cher, Sandy Dennis and Karen Black star in Robert Altman’s Come Back to the 5 & Dime…, the story of a group of James Dean devotees who meet up on the 20th anniversary of his death to reconnect. Later on, there’s Walter Hill’s Hard Times – not a surprising Dickens adaptation, but the bruising adventures of an illegal prize-fighter in Depression Era New Orleans. McFarland, USA is a good old-fashioned inspirational sports film starring Kevin Costner (a genre all of its own) about a former football coach who turns his attention to building a cross-country team to help the under-privileged kids of his new school. Finally, and one I hope makes its way to All 4, is Love is Strange, a touching drama starring Alfred Molina and John Lithgow as a couple whose long-lasting love is tested when circumstances force them into separate homes.

Richard Burton stars as Henry VIII in Anne of the Thousand Days, a retelling of the monarch’s controversial desire to divorce his first wife, Catherine of Aragon and marry Anne Boleyn. Tim Burton’s Big Eyes sees Amy Adams play American artist Margaret Keane, whose distinct artistic style was initially credited to her husband, Walter (Christoph Waltz). The day ends with an absolute belter: Night of the Demon, a classic slice of British gothic that sees an American psychologist travel to England to investigate a strange satanic cult. The film even inspired Kate Bush: “It’s in the trees! It’s coming!”

It’s a Film 4 sort of day this coming Monday, with an intriguing prospect as a first recommendation: Run for Cover, a Western starring James Cagney and directed by Nicholas Ray. There are more noir stars foraying into other genres, as Robert Mitchum’s destroyer captain gets involved in a deadly game of cat and mouse with his German U-Boat counterpart in WWII sea-drama The Enemy Below, directed by Dick Powell. Michael Douglas, Kathleen Turner and Danny DeVito have a ball in adventure romp Romancing the Stone, about a romance novelist who finds herself on a wild trip to save her kidnapped sister. There’s a stunning Steve McQueen (director, not actor) double bill in the evening, beginning with Best Picture winner 12 Years a Slave, the powerful, unflinching and brilliant adaptation of Solomon Northrup’s diaries. Its packed cast includes Chiwetel Ejiofor giving the performance of a lifetime, Lupita Nyong’o’s Oscar-winning turn and a villainous Michael Fassbender. Fassbender also stars in Shame, McQueen’s stylish and intense drama about a man’s spiralling sex addiction and its devastating repercussions on his life. Elsewhere, there’s a tea-time screening of Ernest Hemingway adaptation For Whom the Bell Tolls, starring Gary Cooper and Ingrid Bergman in a tale of an American helping fight fascism in the Spanish Civil War, as well as entertaining threequel Die Hard with a Vengeance, with Bruce Willis’ returning John McClane forming a fun double act with Samuel L. Jackson’s reluctant shopowner.

There are more suggestions for things to catch-up on than new listings to check out today, but, if you’re in the mood for some film noir, you can check out The Mob. It’s a quintessential set-up of the genre: a suspended police detective is placed undercover to investigate the mysterious death of a waterfront mob boss. Broderick Crawford (All the King’s Men) stars.

An epic collaboration between Japanese and American filmmakers, Tora! Tora! Tora! is an insightful recreation of the events leading up to and including Pearl Harbour. Featuring some hard-hitting action scenes, it’s been the blueprint for films about the attack since. Deborah Kerr and Robert Mitchum team up for their fourth collaboration in Reunion at Fairborough, a genteel romance about a WWII vet who travels to England and meets up with an old flame. Finally, two very different documentaries. BBC’s Storyville series shows Welcome to Chechnya, the hard-hitting story of the LGBTQ+ activists risking their lives as they fight for their rights amidst anti-gay purges. Then Kalik Allah’s photographic documentary Black Mother depicts different people living in Jamaica, filming their faces for a few seconds as if visual portraits.

A grand cast – including Albert Finney, Jeanne Moreau, Eli Wallach, Romy Schneider and more – star in Carl Foreman’s exploration of the futility of war in The Victors, whilst James Stewart plays a man hunting fugitive and a rifle that keeps passing hands in Western Winchester ’73. There’s more than a touch of the Dickens to British neo-noir thriller Cash on Demand, a Hammer Horror production starring Peter Cushing about a charming, ruthless man who tries to rob a bank by holding its manager’s family hostage. There are more thrills to check out at 9pm, with Harrison Ford’s wrongly accused Dr Kimble on the run from Tommy Lee Jones’ persistent martial in The Fugitive and Walter Matthau’s New York lieutenant in a battle of wits against a group of subway hijackers led by Robert Shaw in The Taking of Pelham One Two Three. There are a couple of documentaries in the shape of BAFTA-winner Touching the Void, a remarkable mountaineering story, and Scandalous! The Tabloid that Changed America, a jaw-dropping look at the long-lasting effect of the National Enquirer. Elsewhere there’s a double bill of 2015 highlights on Film 4: Tom Hiddleston, Luke Evans, Elisabeth Moss and more star in High Rise, Ben Wheatley’s stylish adaptation of J. G. Ballard’s sinister dystopian, whilst Patrick Stewart’s menacing neo-Nazi club-owner sets his gang on a punk band in Jeremy Saulnier’s crunching horror-thriller Green Room.

Bob Hope and Dorothy Lamour star in film-noir parody My Favourite Brunette on Friday morning, a film that also sees genre stalwart Peter Lorre pastiche his many recognisable roles, as well as a few other film noir cameos. Jack Nicholson stars as a mysterious gunslinger tracking a mysterious woman and her companions in Western The Shooting, whilst Charles Coburn stars in The Devil and Miss Jones, a comedy with bite that sees a tycoon go undercover in one of his department stores to infiltrate a potential union, only to find himself learning more about his employees – including Jean Arthur’s Mary Jones. Sverrir Gudnason and Shia LaBeouf take on one of sport’s most infamous rivalries in tennis biographical drama Borg vs McEnroe, whilst Robert DeNiro offers Bradley Cooper a drug to help him fully utilise his brain – and all the inevitable consequences of that – in sci-fi-action-thriller Limitless. Finally, in the early hours there’s The Survivalist, a brutal, atmospheric, BAFTA-nominated post-apocalypse drama about a trio of people who find themselves living together whilst navigating their suspicions and survival instinct. It’s a tough watch but unique.