Duke Box #14: Our Guide to the Best Films on TV 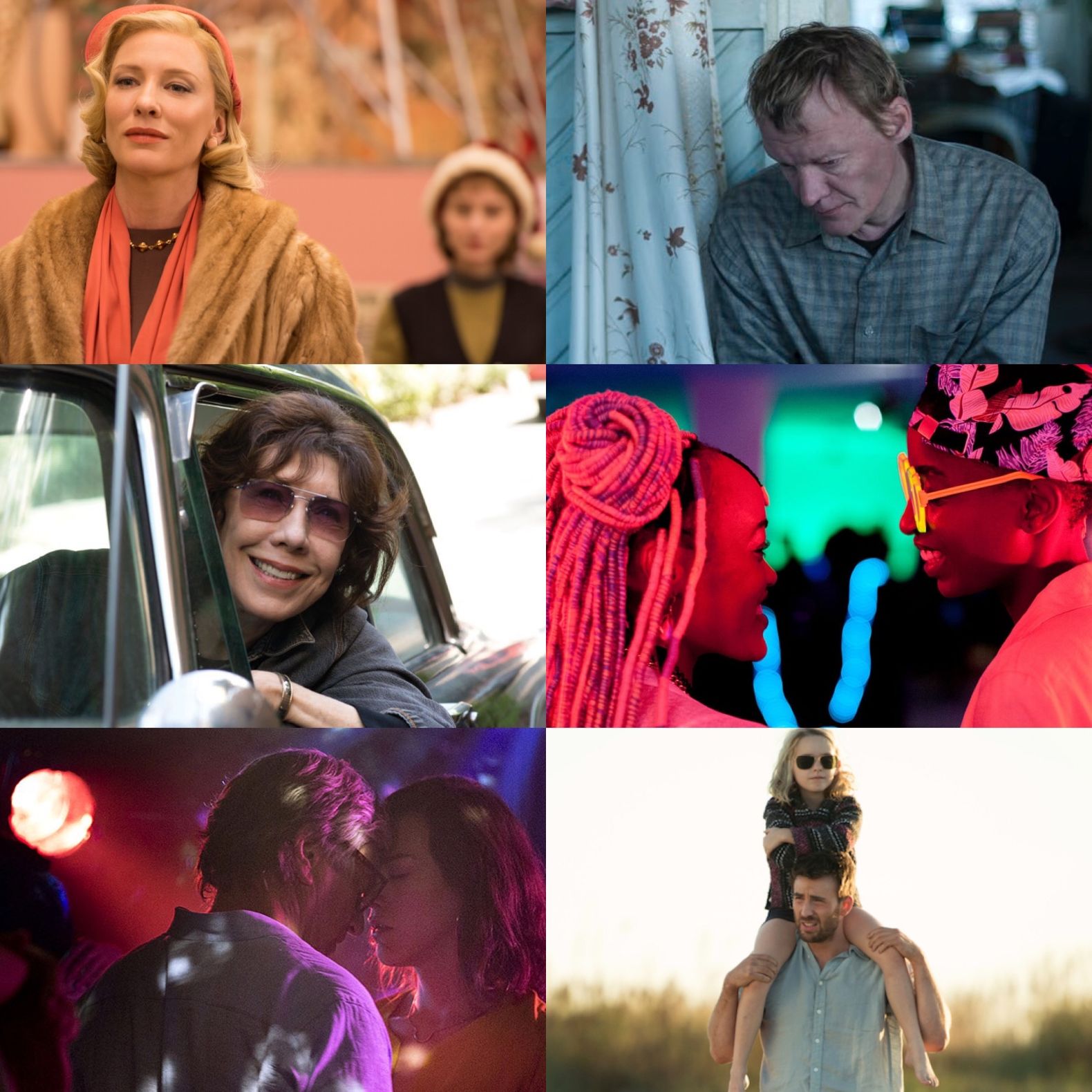 There's a great mix of documentaries, world cinema, classics, action and love stories appearing this week, so hopefully a little something for everyone. Some of our recent favourites make an appearance too, especially in Film 4's brilliant line-up for Pride Month, meaning that narrowing it down to one Pick of the Week has been quite hard! I'll just say, keep an eye out for Carol, Leviathan, I Am Not Your Negro and Call Me By Your Name.

(A reminder that this list isn’t exhaustive and that some films will be repeated at different times – these are just some key titles to look out for at what are likely the best times. Some films may also change if channels decide to alter their listings.)

Both family-friendly picks today come courtesy of Disney: documentary Bears in the morning and the fun, manga-inspired Big Hero 6 in the afternoon (would very much like a Baymax please). In between the two are western Bend of the River, starring James Stewart and Rock Hudson, culture clash comedy-drama The Two Hundred-Foot Journey, featuring Helen Mirren and Om Puri as rival restauranteurs in France, and King Rat, a dramatic look at power dynamics between American and UK prisoners in a WWII POW camp. There’s an extraordinary, timely documentary to watch in the evening in the form of I Am Not Your Negro, a close look at the writings and civil rights activism of James Baldwin (who wrote the novel If Beale Street Could Talk). Also on at 9pm is The Rainmaker, Francis Ford Coppola’s adaptation of John Grisham’s legal drama, starring an impressive ensemble. Ryan Gosling and Russell Crowe make a fine double-act in Shane Black’s The Nice Guys, a fun black comedy/neo-noir mash-up set in 1970s’ L.A, whilst Chris Evans stars in Gifted, a lovely drama about a child prodigy caught in a custody battle between her uncle and grandmother. Finally, after midnight, there’s Kajaki: A True Story, a tense drama about the horrors of modern warfare.

It’s never going to be lauded as a classic, but A Knight’s Tale, starring a young Heath Ledger, comes from the school of ‘rollicking good fun’, whilst Western classic The Magnificent Seven sees Yul Brynner, Steve McQueen and more star as gunfighters hired to liberate villagers from oppressors. There are a trio of true-life inspired stories on in the evening: The Imitation Game, which sees Benedict Cumberbatch star as genius mathematician and wartime codebreaker hero Alan Turing, ransom thriller All in the Money in the World about the John Paul Getty III kidnapping, and Rescue Dawn, which sees a curious mix of Christian Bale, Steve Zahn and director Werner Herzog combine to tell the story of pilot’s struggle for survival during the Vietnam War. Finally, there’s Russian gem and Venice Golden Lion winner Leviathan, a slice of social commentary that centres on the conflict between a volatile mechanic and his town’s corrupt mayor.

Another chance to see: Charade (Talking Pictures TV, 1.30am), Cloverfield (Paramount, 2am)

This week, Monday is all about the evening. Bruce Willis’ John McLane is back alongside a host of returning characters in hit sequel Die Hard 2: Die Harder, which, like its title, is not afraid to lean into the ridiculous. There’s a fine triple bill on Film 4, beginning with Luca Guadagnino’s gorgeously shot story of first love Call Me By Your Name, starring Timothee Chalamet, Armie Hammer and a fine soundtrack from Surfjan Stevens. Speaking of music, feel-good musical Sing Street follows; from the director of Once, it’s the charming story of an Irish teen in 1980s Dublin who starts a band to impress a girl. The final Film 4 offering is In Between, a nuanced drama following three Palestinian women juggling the traditional and the modern in Tel Aviv. Elsewhere, there’s a close look at the history of civil rights activists The Black Panthers and the era of their movement in a sobering Storyville documentary on BBC4.

There are a couple of war-time, ship-set films on today, with Sink the Bismark!, a nuanced retelling of the notorious WWII incident with a docudrama style feel (despite the exclamation mark), and Wolfgang Petersen’s Das Boot, which tells the story of a German I-Boat crew. There’s more action, albeit of a more stylised manner, in Atomic Blonde, a Cold War-era action-thriller starring Charlize Theron and directed by David Leitch (John Wick). Todd Haynes’ beautiful romance Carol sees Rooney Mara and Cate Blanchett star respectively as an aspiring photographer and a married woman who embark upon a forbidden affair in 1950s America. It’s a simply stunning adaptation of Patricia Highsmith’s groundbreaking novel The Price of Salt. There’s more Todd Haynes directly afterwards as well, with Velvet Goldmine, a tribute to 1970s glam-rock and its pioneering icons.

Barbara Stanwyck gives a barnstorming performance as a heiress who clashes with her ruthless cattle baron father in fiery Western The Furies in the early afternoon, just before Leslie Howard stars in Pimpernel Smith, a WWII update of The Scarlet Pimpernel’ that sees a seemingly mild-mannered Professor take on the Nazis and protect the oppressed. There’s more literature-inspired film at 9pm with Ian McEwan adaptation On Chesil Beach, a 1960s set look at an idyllic romance, a fateful wedding night; Saiorse Ronan stars. Also on at 9pm and also from 2017 is the raucous comedy Girls Trip about a group of old friends whose trip to reconnect at a music festival doesn’t quite go to plan…Finally, a real gem of a film (again from 2017): A Fantastic Woman, a visually striking Chilean drama from Sebastián Lelio (Gloria Bell, Disobedience) about a young transgender woman (the fantastic Daniele Vega) whose life begins to fall apart after her partner dies.

There’s a double dose of classic British comedy on Talking Pictures TV, featuring some of its most iconic performances. Alec Guinness takes on multiple roles with aplomb in Ealing favourite Kind Hearts and Coronets, whilst Alistair Sim and Margaret Rutherford star in school-set farce The Happiest Days of Your Life. Pretend there’s muddy fields in your living room with documentary Glastonbury, a look at the history of the beloved music festival. Finally, there’s a sublime double-bill on Film4 in the evening: Grandma, a glorious American indie dramedy, with an on-fire Lily Tomlin, and revolutionary Kenyan romance Rafiki, a beautiful, bold and brightly told story of two girls whose friendships turns into something more.

Alex Jennings stars as Alan Bennett in the big-screen adaptation of The Lady in the Van, directed by Nicholas Hytner and starring Maggie Smith the titular figure. Then, both appearing at the bizarrely accurate same time, there’s Blue is the Warmest Colour, the emotionally charged French love story, and Laurence Kasdan’s The Big Chill, about a group of college friends gathering for a reunion. The astonishing ensemble includes Glenn Close, William Hurt, Tom Berenger, Jeff Goldblum, Mary Kay Place, Kevin Kline, Meg Tilly and JoBeth Williams.