Duke Box #13: Our Guide to the Best Films on TV 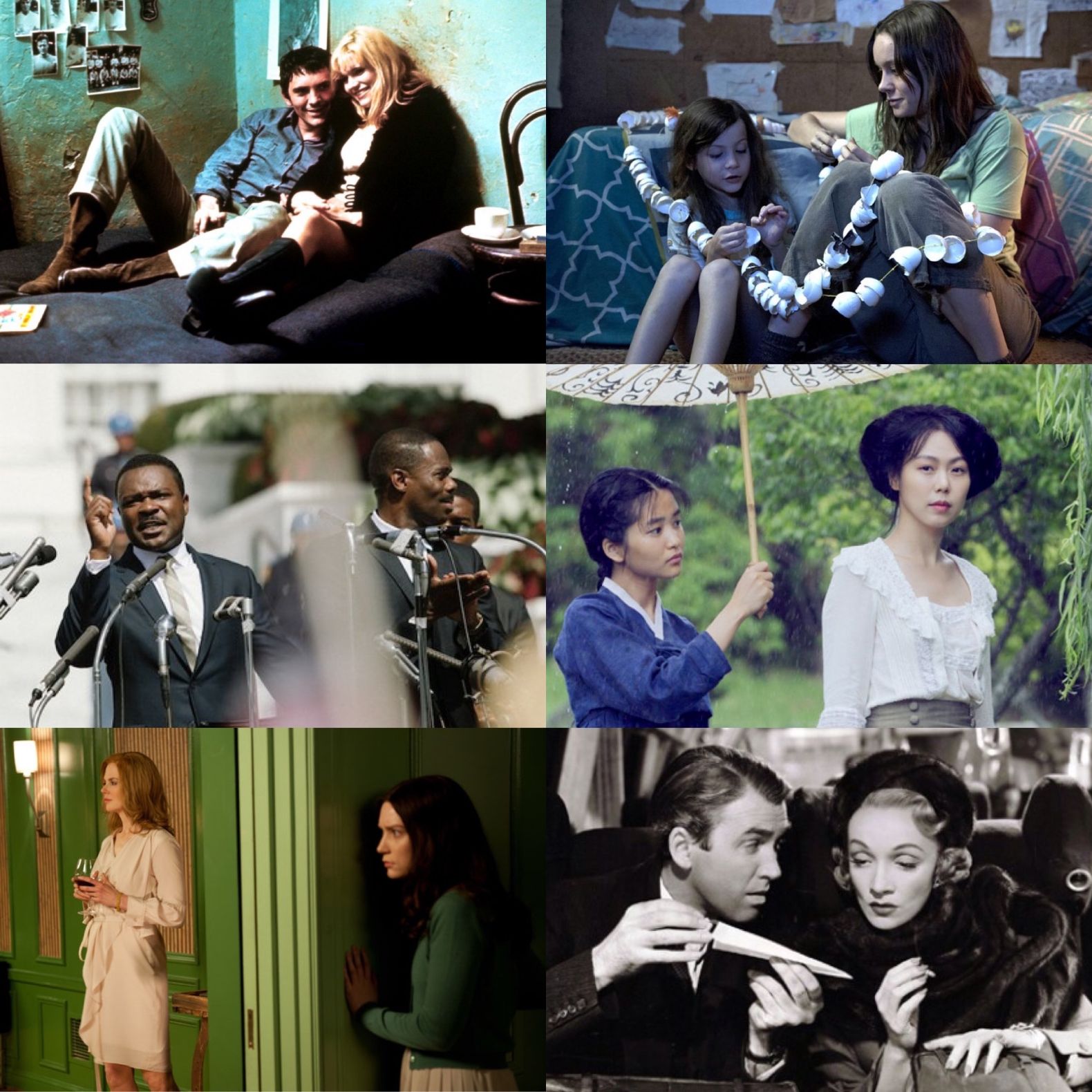 The listings are starting to look less packed, but, rest assured, there are still some real treats to be found, including some fantastic recent releases.

That includes Pick of the Week: the timely screening of Ava DuVernay's excellent Selma - a beautifully shot, wonderfully acted and gripping account of a pivotal moment in the Civil Rights movement and campaign for racial equality that will stay with you after watching.

(A reminder that this list isn’t exhaustive and that some films will be repeated at different times – these are just some key titles to look out for at what are likely the best times. Some films may also change if channels decide to alter their listings - as they did this week with Two Days, One Night. It looks to have disappeared from the listings but do keep an eye out in case it miraculously reappears - it's a great film.)

There’s more on during the day in the repeats part of Saturday’s recommendations, but there's a good range of new suggestions cropping up from early evening. Domhnall Gleeson and Margot Robbie star in Goodbye Christopher Robin, the biographical story of Winnie the Pooh creator, A.A. Milne. 3 decades of a mother/daughter relationship and a cracking ensemble (MacLaine, Winger, Nicholson, Lithgow, DeVito…) are at the heart of Terms of Endearment, whilst British comedy-drama Finding Your Feet stars Imelda Staunton as a snob who’s forced to move in with her bohemian sister (Celia Imrie) after her marriage breaks down. There are thrills to be had in twisty supernatural story Stir of Echoes and iconic Steve McQueen vehicle Bullitt (featuring ones of the best on-screen car chases), which are both on at a similar time.There are a couple of great films occupying the later hours of Saturday evening, beginning with 99 Homes, a powerful drama about a single father who begins working for the man who evicted him and his family from their home in order to get it back. Oscar-winner Room is a masterful adaptation of Emma Donoghue’s best-selling novel, starring Best Actress winner Brie Larson as a captive woman and a brilliant Jacob Tremblay as her five-year-old son who has never experienced life outside the four walls. Finally, there’s Matt Reeves’ found-footage sci-fi smash-hit Cloverfield.

Magical animation How To Train Your Dragon is a modern family classic, following hapless young Viking Hiccup and his friendship with adorable dragon Toothless and all the obstacles they face – perfect Sunday lunchtime viewing. Deemed one of the most beautiful Westerns ever shot, The Big Country stars Gregory Peck, Jean Simmons, Charlton Heston and an Oscar-winning Burl Ives in a story of feuding families. Joan Crawford, Jack Palance and Gloria Grahame in full femme fatale mode star in film noir Sudden Fear in the early evening, whilst there’s also a chance to see Gurinder Chadha’s fun sports comedy Bend it Like Beckham, a decent cinema substitute (pun intended, sorry) for what would have been a weekend of Euros. Rogue One is a great addition to the Star Wars canon; set just before A New Hope, it’s a grittier look at the effects of war, channelling Vietnam War film influences and offering thrilling set-pieces and moving moments – plus a villain who’s just essentially a very annoyed middle-manager. A fine homage to Shane, Clint Eastwood’s Pale Rider sees the Western star play a mysterious Preacher who helps a village fend off a greedy mining company. It’s considered one of Eastwood’s finest. Dames Maggie Smith and Judi Dench pop up with fantastic performances in the evening too, with the former shining as an impressionable and questionable teacher in her film breakthrough The Prime of Miss Jean Brodie and the latter on sparkling form in the much more recent Philomena, a charming, funny and moving film inspired by a remarkable true story.

It’s a relatively low-key day on Monday – which is great for highlighting Cop Land and Stoker on in the evening. From director James Mangold (3:10 to Yuma, Logan), fantastic neo-noir Cop Land, starring Sylvester Stallone and Robert De Niro at the top of a stacked ensemble, sees a small-town New Jersey sheriff tasked with uncovering the corruption of locally-based NYPD police officers. Meanwhile, Stoker, the English language debut of Park Chan-wook (Oldboy, The Handmaiden – on C4 on Wednesday), is a supremely gothic, twisted tale of a lonely girl whose life is disrupted by the arrival of her mysterious uncle. Mia Wasikowska, Matthew Goode and Nicole Kidman all nail the woozy, unsettling tone and the cinematography is stunning.

This afternoon sees Destry Rides Again co-stars James Stewart and Marlene Dietrich team up again for No Highway in the Sky, an aviation drama about an eccentric scientist who must convince executives that a series of planes are at risk of tragic consequences. There are a couple of American indies and Sundance hits on Film 4 late in the evening, starting with Patti Cake$, the underdog story of a New Jersey girl aspiring to be a rapper. The Sessions follows, starring John Hawkes and Helen Hunt in a tender, funny story inspired by the writings of Mark O’Brien, a poet living in an iron lung who hired a sex surrogate to help him lose his virginity. Finally, in another case of ‘it’s on very late and it will likely be on All 4 but I’ll flag it up if it appears again’, is The Handmaiden, Park Chan-wook’s stunning take on Sarah Waters’ novel Fingersmith. Moving the neo-Victorian novel to 1930s’ Korea, it’s a bold, thrilling and mischievous film complete with romance, a fair few surprises and typical flair.

It’s a good day for Talking Pictures TV today. There’s classic film noir in the morning with The Strange Love of Martha Ivers (featuring a characteristically excellent Barbara Stanwyck), a slightly sentimental but movingly nostalgic look at the life of William Friese-Greene, a pioneer in the invention of moving pictures cameras, in The Magic Box (a huge inspiration to Martin Scorsese) and Ken Loach’s debut feature Poor Cow, starring Carol White and Terrence Stamp. Fun fact: footage from Poor Cow was actually used in Steven Soderbergh’s The Limey, starring Stamp, to show that film’s character as a younger man. Elsewhere, at 9pm, there’s David Fincher’s story of Mark Zuckerberg and the birth of the Facebook behemoth, The Social Network – considered one of the best films of the decade. Finally, mockumentary Popstar: Never Stop Never Stopping – this swipe at the pop industry won’t be for everyone, but when Andy Samberg’s combination of silly and smart humour lands, it’s great.

Alec Guinness and John Mills star in Tunes of Glory, a psychological drama set in Scottish barracks during WWII, in the early afternoon, before a double-bill of adaptations over on Talking Pictures TV. Carol Reed’s The Fallen Idol, inspired by a Graham Greene short story, follows an impressionable young boy who is the sole defendant of a butler accused of murder, whilst the big-screen take on Terence Rattigan play The Winslow Boy tells the story of a teenager who is expelled from the Navy and his family’s fight to clear his name. Angelina Jolie’s Unbroken is the true story of Louis Zamperini, a US Olympian who had to endure multiple harrowing tests during WWII. The picture isn’t flawless but it’s a remarkable story of resilience. Unbroken is the first of an intriguing trio of 2014 films on Film 4, which continues with St. Vincent, a dramedy starring Bill Murray as a bawdy misanthrope who bonds with his neighbour’s son, and documentary Precinct Seven Five, a close look at one of the most corrupt police officers and precincts in 1980s’ New York.

Henry Fonda and a pre-Psycho Anthony Hopkins star respectively as a cynical bounty hunter and a fresh-faced sheriff in The Tin Star, a film that’s both a staple of the Western genre and yet criminally underrated. There’s another double-act of a much different kind in John Woo’s high-octane, action-extravaganza, Face/Off, featuring John Travolta and Nicolas Cage (and absolutely ludicrous science) as an FBI agent and criminal mastermind who assume each other’s identities by literally swapping faces. There’s more action – and tension – to be had in Steven Spielberg’s contemporary take on H.G. Wells’ War of the Worlds, starring Tom Cruise as the dad tasked with trying to keep his children alive in the wake of an alien invasion. There’s a timely screening of Ava DuVernay’s powerful Selma, the story of the civil rights march from Selma to Montgomery, Alabama led by Dr. Martin Luther King Jr. (a towering performance from David Oyelowo). It’s on quite late in the evening but will almost certainly be available on catch-up. The late, late night film is quite a sharp pivot, with Army of Darkness – the madcap third part in the Evil Dead franchise which sees hero Ash sent back to the Middle Ages and battling an army of the undead.