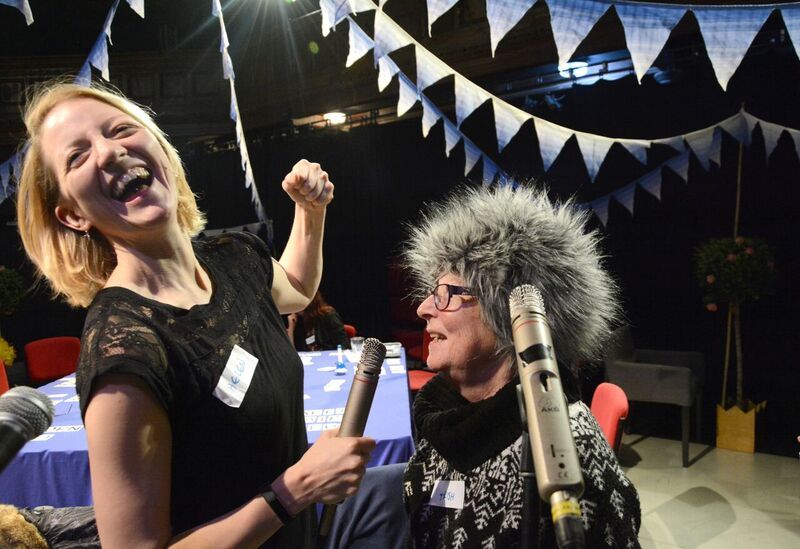 We are proud to reveal details of our latest groundbreaking project which aims to put a smile on the faces of people living with dementia.

Bring Me Laughter follows on from our pioneering A Life More Ordinary (ALMO) programme of dementia friendly events and is funded by Wellcome’s Public Engagement Fund.

The idea for the new project was sparked by the success of ALMO’s Still Me multi-arts group which focused on creativity, imagination and fun.

Our Inclusive Film and Theatre Officer, Gil Graystone said: “We were very aware of the amount of laughter produced in the Still Me sessions and started to think of how generating more laughter might benefit people with dementia and their carers.”

The Dukes proximity to Morecambe and all its comedy connections is a factor in the project too as many people attending ALMO sessions had memories of seeing comics in the resort.

Although music has long been acknowledged to stimulate memories for people with dementia, the power of laughter is yet to be explored so we hope to be a pioneer in this field, inspiring future research.

A professor of dementia studies and a neuroscientist, both from University College London, will monitor the effects of laughter on the people involved.

The project will explore how laughter and playfulness can be used to develop stronger social connections and better communication with people living with dementia and their carers and help to understand how the relationship between play, laughter and the development of rapport impacts on the daily life of those involved.

Bring Me Laughter will include dementia friendly film screenings and activities that encourage play through music, dance, drama, visual arts and poetry.

Training and creative sessions will take place in Lancaster, Morecambe and Carnforth as well as care homes and a carers guide will also be produced.

It is planned that primary school children will be involved with some of the activities too.

The project will culminate from May 21-23, 2020 with a three-day festival at The Dukes featuring performances, workshops, lectures and displays open to people with dementia and their families, health and care professionals and artists as well as the general public.

“Bring Me Laughter is a big project covering innovative ground and we hope to have some fun along the way,” said Gil.