Duke Box #8: Our Guide to the Best Films on TV 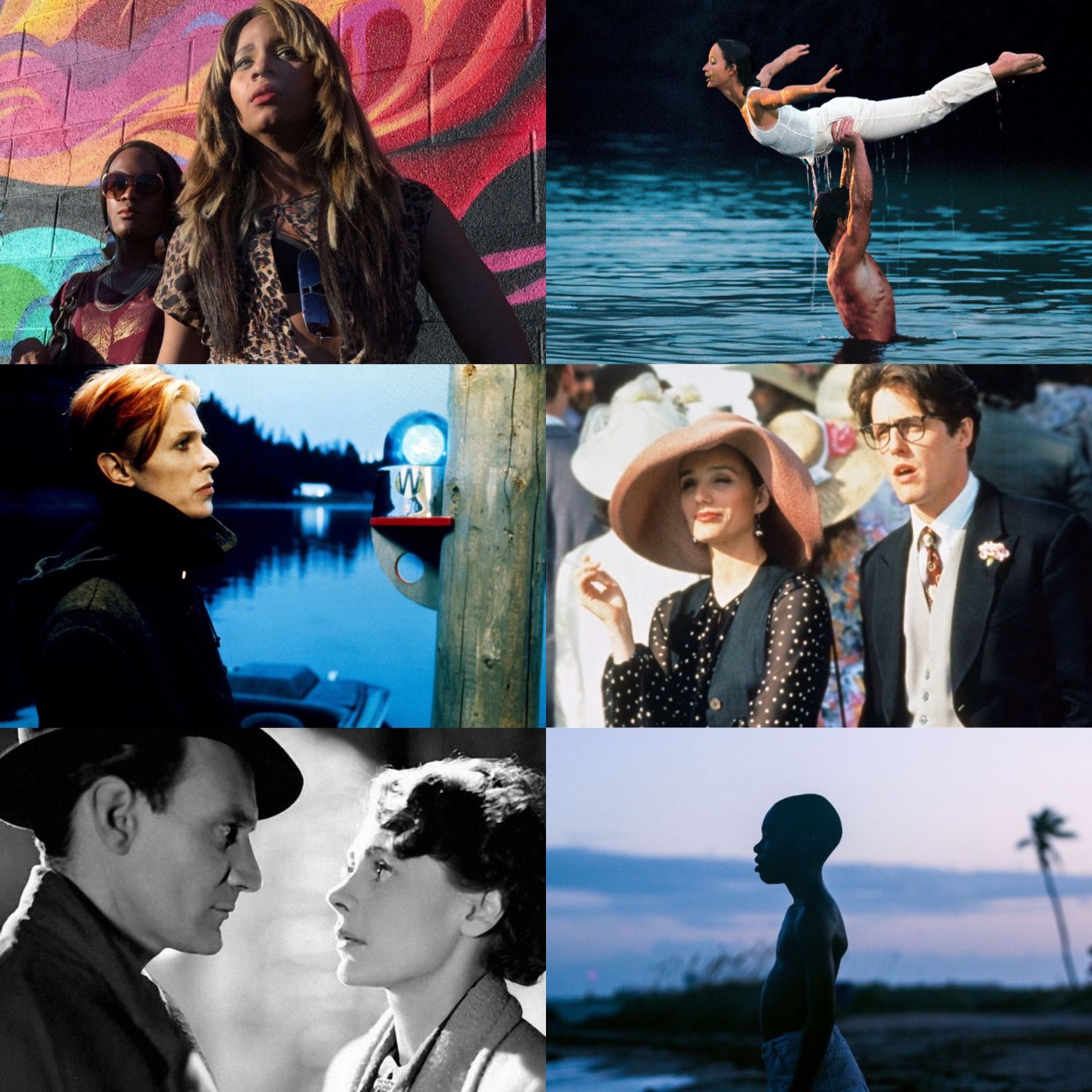 Variety is the spice of life this week! There's such an eclectic choice of films on the box, so hopefully I've found a little something to suit everybody.

Pick(s) of the Week: Barry Jenkins' Moonlight - a film that moves me more and more each time I watch it. A close second: Brief Encounter, for exactly the same reasons.

Based on a Noel Coward play and directed by David Lean, This Happy Breed follows a lower-middle-class family in Clapham in the twenty years between WWI and WWII. Celia Johnson is excellent as the family matriarch, and even if some of the beats don’t quite land now as they would then, it’s a fascinating narrative and early glimpse at an influential filmmaker. Lynn Redgrave stars as the titular Georgy Girl, a Britflick that sees a young girl caught up in the Swinging 60s life of London. There’s a chance to kick back in the afternoon with Kevin Costner’s Dances With Wolves, a sweeping epic that helped revitalise the Western genre and scooped up 7 Academy Awards. It’s a beautifully shot film with fantastic performances, great set-pieces and a stunning score by John Barry. Finally, in the evening: greed is, for lack of a better word, good in Oliver Stone’s stockbroker drama Wall Street, President Harrison Ford takes on a plane full of terrorists led by Gary Oldman in Air Force One and Chiwetel Ejiofor dons some Kinky Boots for a fun, fabulous Friday night film about a small British shoe factory teaming up with a drag queen in order to save their business.

One of Robert Redford’s best performances, the early afternoon’s Jeremiah Johnson (directed by Sydney Pollack) tells the story of a loner mountain main on the early frontier. There’s another type of Western in 7 Men From Now, which sees Randolph Scott on a mission to track down and kill the seven men responsible for the death of his wife. Sitting in between the two, Oscar Wilde adaptation and forged identity comedy The Importance of Being Earnest – featuring the ultimate Lady Bracknell – and WWII adventure thriller, The Eagle Has Landed (starring Michael Caine, Donald Sutherland, Robert Duvall, Jenny Agutter and Donald Pleasance), about a fictional German plot to kidnap Winston Churchill. Another fantastic ensemble, led by Sam Rockwell, star in coming-of-age comedy drama The Way Way Back, before another Churchill-centric film in Darkest Hour, making its terrestrial debut. An Oscar-winning Gary Oldman is unrecognisable as the Prime Minister during the early days of his tenure, whilst Kristin Scott Thomas, Lily James and Ben Mendehlson star in support.

Both Scott-Thomas and Mendelsohn star in other top picks of the evening – Richard Curtis’ British comedy smash Four Weddings and a Funeral (endlessly quotable) and gambling drama/road trip indie Mississippi Grind, directed and written by Anna Boden and Ryan Fleck (Half Nelson, Captain Marvel). They’re two gems in a stacked and diverse Saturday night quota, that also includes David Bowie’s mesmerising and influential turn in Nicolas Roeg’s cult sci-fi The Man Who Fell to Earth. There’s a charming performance from Irrfan Khan (who sadly passed away this week) in touching romantic drama The Lunchbox, whilst Tony Todd made a role his own in Candyman, a horror film about urban legends that delves into the history of racial prejudice in America, features a remarkable score from Philip Glass and is based on a Clive Barker short story.

There’s another fantastic mo-cap performance from Andy Serkis as the titular King Kong in Peter Jackson’s glossy remake, whilst Jason Isaacs is perfectly hiss-worthy as Captain Hook in the family-friendly Peter Pan. Guillermo Del Toro’s Hellboy is a fun superhero caper, featuring the director’s stylish flair and a blistering performance by Ron Perlman in a role he was born to play. There’s also fun to be had in Guy Ritchie’s rollicking adaptation of Sherlock Holmes, a more action-packed take on the classic detective and his mysteries.

There’s an abundance of riches in the evening, from George Lucas’ American Graffiti, a close-up on American teenagers, their cars and rock-and-roll set on one single night (and starring a young Harrison Ford), to Clint Eastwood’s grizzled western about a gunfighting stranger hired to hold off outlaws, to Michael Mann’s The Last of the Mohicans, a sweeping historical drama (with a fair bit of romance) set in mid-18th century America. The iconic Dirty Dancing is a good-time go-to, with its quotability, excellent soundtrack and lead pairing of Jennifer Grey and Patrick Swayze. There’s also chemistry to burn in the sultry remake of art-thief crime-romance The Thomas Crown Affair, starring Pierce Brosnan and Rene Russo. Finally, take a closer look at one of cinema’s most influential directors with Searching for Ingmar Bergman, a late-night documentary that might crop up on All 4.

Having recommended James Mangold’s remake last week, there’s the opportunity to see the original 3.10 to Yuma (starring Glenn Ford and Van Heflin) or try out another classic western in John Ford’s Fort Apache, starring John Wayne as a veteran war captain who clashes with a glory hungry lieutenant (Henry Fonda) with no respect for the local Native American tribe. There are two British gangster films in the evening: Brighton Rock (adapted from Graham Green’s novel), starring Richard Attenborough as the violent crook Pinkie Brown, and Get Carter, featuring Michael Caine as a vengeful gangster wanting to find out more about his brother’s death. If that tension wasn’t enough for you, Humphrey Bogart stars as a crusading district attorney in film noir The Enforcer, based on the Murder Inc. trials. Meanwhile, later in the evening, a young Martin Compston (Line of Duty) stars as a teenager from a tough background who wants to raise money him and his mum, newly released from prison, in Ken Loach’s Sweet Sixteen.

It’s another wide variety of films in the evening, beginning with two mysteries in the shape of Otto Preminger’s neo noir thriller Bunny Lake is Missing, starring Laurence Olivier, and Wind River, written and directed by Taylor Sheridan (writer of Hell and High Water and Sicario). The latter sees Elizabeth Olson and Jeremy Renner star as the duo tasked with solving a murder on the Wind River Indian Reservation. The Sacrifice, about a man trying to bargain with God to prevent a nuclear holocaust, is Stalker and Solaris director Andrei Tarkovsky’s final film, whilst rotoscoped animation Tehran Taboo is a bullish look at a group of people trying to cope with the strict demands of religious law in Iran.

Another chance to see: Wall Street (Sony Movies, 9pm), The Last of the Mohicans (Paramount, 11.05pm)

There’s a charming nineties ensemble at the heart of Little Women, including Winona Ryder, Claire Danes, Kirsten Dunst, Susan Sarandon and Christian Bale, whilst It Could Happen to You, a sweet rom-com about a man who splits a winning lottery ticket with a waitress, is a 90s homage to Frank Capra starring Nicolas Cage and Bridget Fonda. It’s shmaltzy but maybe we need a bit of that right now. The exceptional Moonlight takes centre stage in the evening and deservedly so. This moving story of three stages of young African-American man's life including his grapples with identity and sexuality, is not just a Best Picture Oscar-winner; it’s one of the best films of the 21st century. Bette Davis serves high camp in Hammer Films’ suspense-thriller The Nanny – do not expect Mary Poppins with this one. Finally, in the late night slot, there’s Tangerine, the breakthrough hit from The Florida Project director Sean Baker about a transgender sex worker who’s searching for the man who broke her heart.

Every film today is a little bit different, which seems to be the theme of the week. A slice of Americana from Jeff Nichols, Mud follows two boys as they come across a fugitive (Matthew McConaughey) living on a boat and vow to help him stay hidden. Robocop, meanwhile, is an excellent, crunching action film that not only features some great set pieces and a killer performance by Peter Weller, but is a pretty sharp satire too. Directed by Asif Kapadia, the man behind Amy and Diego Maradona, BAFTA-winning documentary Senna tells the life and death of Brazilian motor-racing champion Ayrton Senna using archive footage, sound-clips and home video. You can also see Can You Ever Forgive Me? director Marielle Heller’s debut feature The Diary of a Teenage Girl, the story of a teenage girl who falls for her mother’s boyfriend, before The Fugitive (no, not that one) – John Ford’s adaptation of a Graham Greene novel, starring Henry Ford as a Catholic priest on the run in a Latin American state where religion is outlawed.

Another chance to see: The Wild One (Sony Movies Classic, 11.20am)

Our audiences will know how much we adore David Lean’s glorious Brief Encounter. It’s a work of art and we love screening it, so it’s wonderful to see it pop up on a Friday afternoon on the BBC. Keep an eye out for Carnforth station! If one delight from a British powerhouse wasn’t enough, there’s also Powell and Pressburger’s delightful I Know Where I’m Going! – a cracking romance about a woman who gets second thoughts about her impending marriage after a storm keeps her and her fiancée on separate islands in the Hebrides. In the evening, there’s a choice between Ridley Scott’s The Martian, starring Matt Damon as an astronaut stranded on Mars and waiting for his team to rescue him, A Cry in the Dark, a real-life story starring Meryl Streep and Sam Neill as an Australian couple who are forced to convince the public of their innocence after their baby disappears in the outback, and Alexander Payne’s black-comedy Election, starring Matthew Broderick as a high-school teacher who clashes with Reece Witherspoon’s ambitious student during the school’s elections.