Duke Box #6: Our Guide to the Best Films on TV 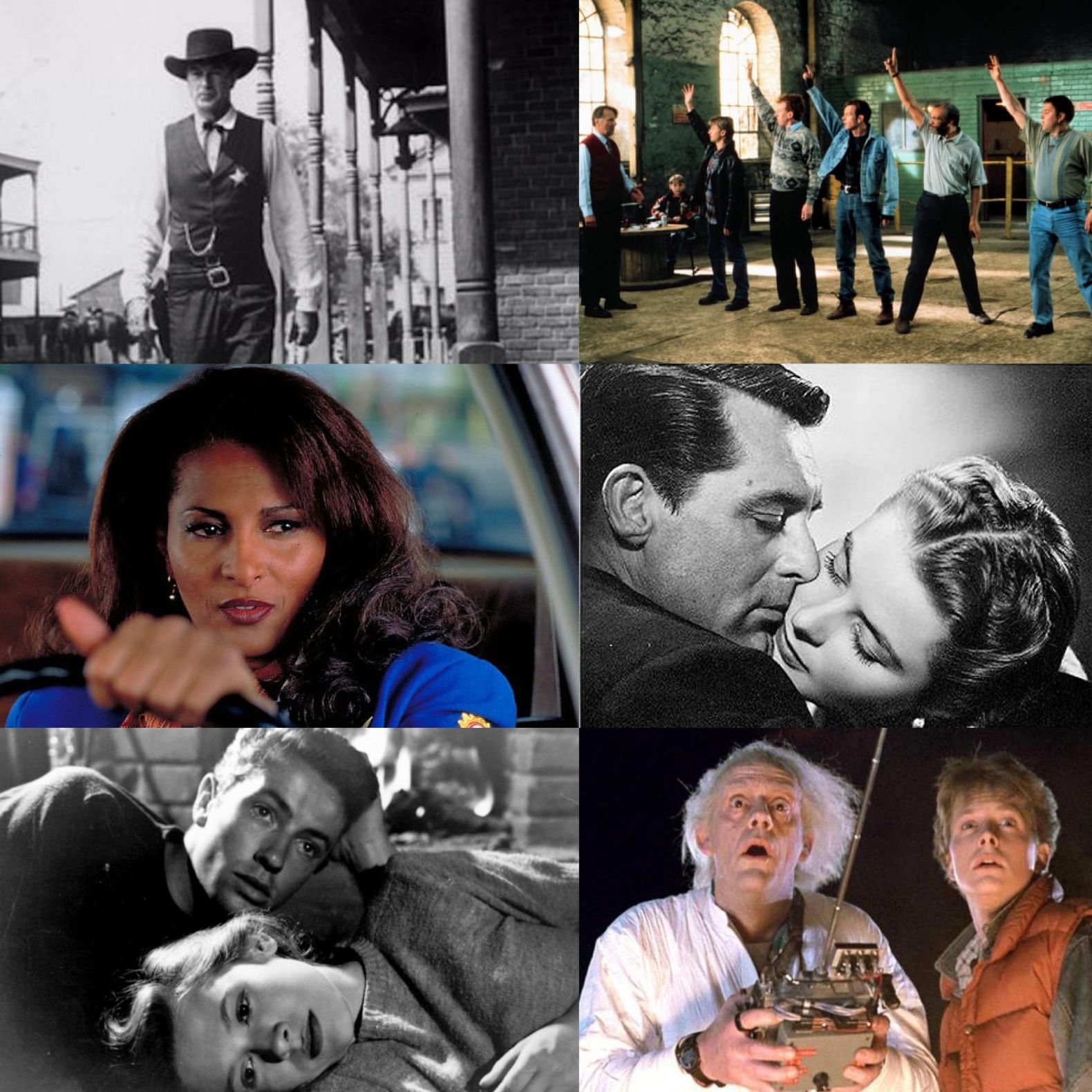 There's another great spread of films on Freeview TV week, including some bonafide classics and perhaps a few older films that might have passed you by. A Back to the Future marathon isn't to be sniffed at either...

Pick of the Week has been relatively easy this time around - Alfred Hitchcock's Notorious is one of his best and tied for top spot with Rear Window as my favourite from his collection. It's seen as a real turning point in his filmography and a playful mix of espionage thriller and romance.

*A reminder of today's choices* Friday 24:

Film 4 continue their run of sumptuous golden oldies with Gentlemen Prefer Blondes, starring Marilyn Monroe in scintillating, iconic form. Elsewhere, Sony Movies Classic deliver multi-Oscar-winner (7!) The Best Years of our Lives, a tender story of three servicemen trying to readjust to civilian life after WWII, and a Humphrey Bogart film noir in Dead Reckoning. Jordan Peele’s smash-hit horror-satire Get Out, Ken Russell’s D.H. Lawrence adaptation Women in Love (starring Oliver Reed, Alan Bates and Glenda Jackson), and M. Night Shyamalan’s twisty Unbreakable, an alternate take on a superhero film, are all on at 9pm (as is the underwhelming Rocky V, but we know I'm a completist and it's handy build-up for the moving Rocky Balboa on Saturday), before a bit of late night cringe with Alan Partridge: Alpha Papa. Best use of Roachford’s ‘Cuddly Toy’ in a film ever.

Great Scott – The Back to the Future Trilogy is playing back-to-back on Film 4! That’s a whole lot of 1980s, 1950s, a, ahem, slightly alternate future (still waiting on my hover board, McFly), and the Wild West. They’re a hoot and always worth seeing collectively, especially parts II & III which had originally intended to be one long movie. Before that, there’s a morning screening of Orson Welles’ noir The Lady from Shanghai whilst in the afternoon there’s a great chance to see the classic western High Noon, starring Gary Cooper and Grace Kelly. A jam-packed evening sees: real-life-inspired neo-noir Bugsy, the story of mobster Bugsy Siegel (Warren Beatty) and his girlfriend Virginia Hill(Annette Bening), a boxing double-bill in Sylvester Stallone’s poignant Rocky Balboa and Michael Mann’s bruising biopic Ali, and Love & Mercy, a powerful dramatization of The Beach Boys singer Brian Wilson and his struggles. Then Martin Scorsese's Oscar-winning The Departed features a cast on top form, a trademark soundtrack and plenty of twists, turns and violence - and, well, so does Quentin Tarantino's Jackie Brown, one of the director's less-talked about but arguably one of his finest films. Finally, brace yourselves for Nicholas Winding Refn’s The Neon Demon, a gory psychological horror set in the modelling world.

Powell and Pressburger classic The Life & Death of Colonel Blimp is a stable of British cinema, often described as the duo’s masterpiece – no mean feat considering their back catalogue also includes The Red Shoes and Black Narcissus. Well worth a watch. An updated version of The Shop Around the Corner, You’ve Got Mail sees Meg Ryan and Tom Hanks reunite with Sleepless in Seattle writer Nora Ephron for a rom-com about two business rivals who unknowingly fall in love as anonymous email pen-pals (although another update is probably imminent based on this technology). Open Range is a classy western directed by and starring Kevin Costner as a former gunslinger forced to take on a corrupt lawman (Michael Gambon) when his cattle crew are threatened. Robert Duvall and Annette Bening co-star. John Hurt and Anthony Hopkins are outstanding in David Lynch’s beautiful, brutal and compassionate story of John (nee Joseph) Merrick in The Elephant Man, whilst Tracy Letts' fiery tragicomedy August: Osage County follows a dysfunctional Oklahoman family who convene after the patriarch disappears and features a brilliant ensemble cast, including the Oscar-nominated Meryl Streep (her best since Doubt) and Julia Roberts.

It’s a bit of an old-school comedy morning on with screwball classic Mr Blandings Builds His Dream House, starring Cary Grant and Myrna Loy, and David Lean’s adaptation of Noel Coward’s Blithe Spirit. Melodrama Magnificent Obsession is another slice of old Hollywood, featuring a classic combination: Technicolor, Douglas Sirk behind the camera and Rock Hudson and Jane Twyman in front of it. Jane Fonda, Jack Lemmon (in a rare serious role for which he won Best Actor at Cannes) and Michael Douglas star in The China Syndrome, a multi-Oscar nominated thriller about a reporter who uncovers safety cover-ups in an L.A. nuclear powerplant. In the evening there’s contemporary art documentary The Price of Everything, Francis Lee’s stunning God’s Own Country, starring Josh O’Connor and Alec Secareanu respectively as a sheep farmer and immigrant who find a surprising romance, and Paddington director Paul King’s Bunny and the Bull a surrealist comedy bout an agoraphobe remembering a road trip.

There are a couple of comedies to keep your eye out for this Tuesday lunchtime. A group of eccentric criminals planning to rob a bank rent rooms from a nosy octogenarian in the Ealing classic The Ladykillers, whilst 1960s Olympics-set matchmaking comedy Walk, Don’t Run features Cary Grant in his final film role. Grant also appears in Alfred Hitchcock’s sublime spy-thriller Notorious as a government agent tasked with enlisting the daughter of a convicted Nazi to go undercover. There’s scintillating chemistry between Grant and co-lead Ingrid Bergman and the film is a landmark in Hitchcock’s oeuvre, featuring a number of suitably tense and revered set-pieces. Finally, there’s the wonderful crime drama The Untouchables, Brian DePalma’s film about Prohibition Agent Eliot Ness and his task force assigned with bringing down notorious gangster Al Capone. Its fantastic cast includes Kevin Costner, Andy Garcia, Robert De Niro and an Oscar-winning Sean Connery.

Have a Robert Mitchum double-bill in the afternoon, with film noir The Locket followed by Holiday Affair, a rare romantic comedy outing for the leading man. (It’s set at Christmas but shrug that off for now). There's a romantic jukebox musical in the form of Dexter Fletcher's Sunshine on Leith, adapted from the stage musical, inspired by The Proclaimers' music and starring George McKay. There’s classic Bond with You Only Live Twice, written by Roald Dahl and featuring one of the best Bond theme tunes courtesy of Nancy Sinatra, whilst Sydney Pollack’s This Property is Condemned, adapted from a Tennessee Williams one-act play and co-adapted by Francis Ford Coppola, is a dramatic love story set in the Depression and stars Robert Redford and an Oscar-nominated Natalie Wood.

Rita Hayworth’s earlier collaboration with Gilda director Charles Vidor, Cover Girl is a bright Technicolor musical about a chorus girl offered a chance at stardom. Co-starring Gene Kelly, it was one of the most popular musicals of the war era. See why Daniel Day Lewis picked up his third Oscar for his titular role in Steven Spielberg’s historical drama Lincoln. There are other excellent performances to keep an eye out for in the astonishing ensemble, including James Spader, David Strathairn and a great Sally Field as Mary Todd Lincoln. Steven Soderbergh’s slick remake Ocean’s Eleven also features a fantastic cast, headed up by George Clooney as the man who leads a heist on a love-rival’s casino. Sitting in a late night slot, and one I’ll definitely look out for kinder repeat times for, Michaelangelo Antonioni’s acclaimed drama The Passenger stars Jack Nicholson as a journalist who assumes the identity of a dead businessman whilst in Chad, without realising the man was an arms dealer...

Following on from Soderbergh’s remake the night before, you can see the original Ocean’s Eleven, starring the infamous Rat Pack, to add a bit of glitz and glamour to your Friday morning. One of the first ‘couples-on-the-run’ flicks, Nicholas Ray’s acclaimed They Live By Night is on at tea-time, before more Bond on ITV in the evening. There are a couple of hit 90s films too, as Antonio Banderas stars as a gun-toting mariachi seeking revenge in Robert Rodriguez’ action-packed Desperado, whilst smash-hit British comedy The Full Monty sees Robert Carlyle, Mark Addy, Tom Wilkinson and more unlikely lads star as unemployed workers who start stripping to make a living. Film 4 has a Tom Hardy double bill: underrated crime film The Drop, written by Dennis Lehane and also starring Noomi Rapace, Matthias Schoenaerts and James Gandolfini in his final role, and Locke, featuring arguably Hardy’s best performance (and the only character seen on screen). In the middle of the two is Nosferatu the Vampyre, Werner Herzog’s stylish, unsettling remake of F.W. Murnau’s classic silent film, starring frequent collaborator Klaus Kinski as the Count.

Another chance to see: Back to the Future III (4.45pm), Bugsy (Sony Movies Classic, 9pm)