Duke Box #59: Our Guide to the Best Films on TV 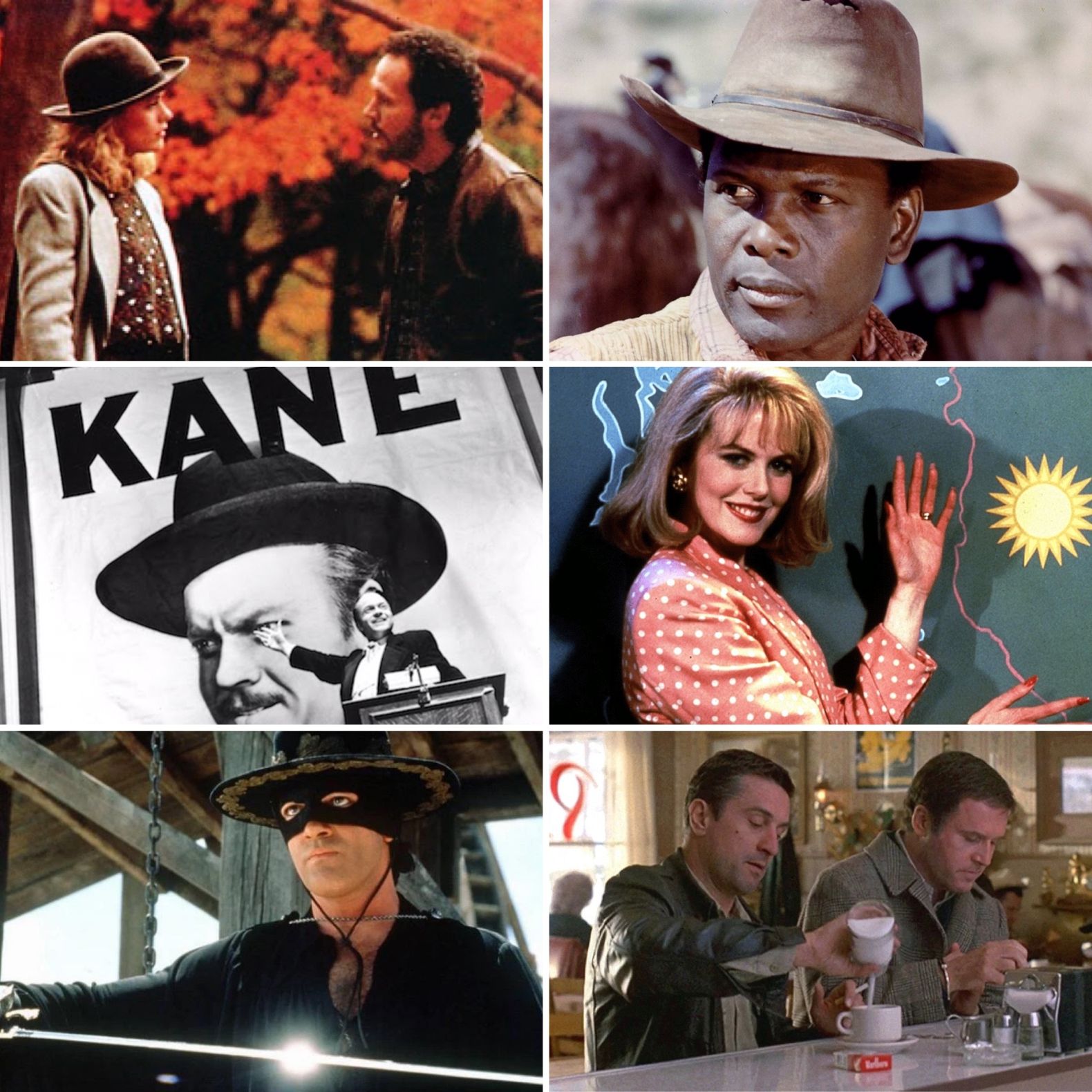 It seems to be a week for quite bold and intense satires, compelling performances and some subversive and seminal bits of filmmaking. Our Pick of the Week though? Well, our eye just keeps on going to the final recommendation on the list - the delightful When Harry Met Sally, making a welcome Friday night appearance on freeview TV (which, nostalgically, is how I first watched the film).

It’s almost kismet that Citizen Kane is on our TV screens this week, having just caused a bit of Film Twitter debate after losing its 100% perfect rating on Rotten Tomatoes. Regardless, as dynamic and thrilling now as it was back in the ‘40s, it’s easy to see why it’s regarded by many as one of the greatest films ever made, with Orson Welles’ influential direction and riveting performance catapulting the story of a reporter tasked with finding the meaning behind a publishing tycoon’s last uttered word into the echelons of cinema. Elsewhere in the afternoon, an American oil company rep heads to Scotland to buy a small town in Bill Forsyth’s delightful comedy-drama Local Hero, Antonio Banderas is on fine swashbuckling form alongside Catherine Zeta-Jones and Anthony Hopkins in the entertaining The Mask of Zorro and Robert Redford and George Segal lead a chaotic jewel heist in comedy The Hot Rock. Nicole Kidman gives one of her finest performances (and it’s a long list) in Gus Van Sant’s dark satire To Die For, a film that smartly skewers celebrity as it follows a ruthlessly ambitious weather reporter dreaming of becoming a big-time news anchor. With Matt Dillon and Joaquin Phoenix in support, it’s not afraid to hit hard. The Day of the Locust also takes a dark look at fame, often slipping into the nightmarish as it follows a group of desperate and lonely people who’ve failed to make it in 1930s Hollywood. Starring Karen Black, William Atherton and Donald Sutherland, it’s an intense watch. The same can also be said for Nicholas Winding Refn’s divisive The Neon Demon, a gory psychological horror set in the modelling world, balancing spectacular visuals, bad taste and homages to 1970s’ Italian horror. Finally, scheduled as a tribute, there’s a wonderful performance by Helen McCrory in British mystery-drama Flying Blind, anchoring the film as a woman who can’t trust her younger lover’s motivations for their affair.

Richard Burton and Clint Eastwood lead an elite group of commandos in a daring rescue mission up in the Alps in the WWII epic Where Eagles Dare, while some British squaddies find themselves up against some savage werewolves in the action-packed horror Dog Soldiers from Neil Marshall (The Descent). That’s followed on Film 4 by High Rise, Ben Wheatley’s stylish adaptation of J.G. Ballard’s sinister dystopian novel, starring Tom Hiddleston, Luke Evans, Elisabeth Moss, Keeley Hawes and more.

Tom Hanks joked in a recent interview that he’s hit a purple patch of playing real-life figures and he’s not wrong, but it’s hard to complain when he’s just so good at it. He gives a typically great performance in Clint Eastwood’s Sully as a real-life pilot who had to work miracles to safely land a damaged plane full of passengers. Sylvester Stallone is also on good form in First Blood, a first outing for his infamous Rambo character that’s much darker and more thoughtful than the rest of the franchise in its story of a troubled veteran traumatically trapped in survival mode by the abusive treatment of a small-town Sheriff and his officers. Elsewhere, Sky Arts have an intriguing double-bill, with art critic Waldemar Januszczak exploring the symbols, codes and secrets of the Sistine chapel’s paintings in documentary The Michelangelo Code, while fans of opera and oratorios may enjoy Handel: La Resurrezione, a concert hall performance featuring the talents of superstar Danielle de Niese.

The film that really put Cate Blanchett on the map, the sumptuously shot and designed historical drama Elizabeth sees the star in early captivating form as a young Elizabeth I in the early years of her monumental monarchy. While stars like John Gielgud and Richard Attenborough add Shakespearean weight, you’ll have fun spotting a fantastic number of rising stars, including Daniel Craig and Emily Mortimer.

Sidney Poiter stepped behind the camera as well as in front of it for his directorial debut Buck and the Preacher, starring alongside Harry Belafonte and Ruby Dee in a Western that broke traditions at the time by focusing on African American settlers who are confronted by white raiders. Indeed, fight for survival seems to be the theme of the day in various ways. A trip into the Montana wilderness takes a turn for the worse for an estranged father and son in striking indie film Walking Out, while eerie sci-fi thriller 10 Cloverfield Lane follows a woman who wakes up after a car crash in an underground bunker with two men who tell her that the outside world is a nuclear wasteland…but can she trust them? There’s paranoia aplenty, all anchored wonderfully well by Mary Elizabeth Winstead, John Goodman and John Gallagher Jr. If subtlety isn’t quite the vibe you’re feeling though, fear not, because there’s Arnold Schwarzenegger and Al Pacino going all out in an enthusiastic double bill on ITV4. Paul Verhoeven’s fast-paced, futuristic sci-fi actioner Total Recall sees Schwarzenegger star as a construction worker who finds out his life is a lie after a memory implantation procedure goes a bit awry, before Pacino delivers an unforgettable performance as Tony Montana in Brian De Palma’s gangster thriller Scarface, an equally frenetic, visual and violent extravaganza – although featuring a bit more Moroder synth than colonised Mars.

Robert De Niro and Charles Grodin create one of the best on-screen double acts as a bounty hunter and bail-jumping accountant in crime-comedy-road-trip Midnight Run, a real gem that also boasts great appearances from Yaphet Kotto, Dennis Farina and Joe Pantoliano. There’s more transport and journeys in Jason Reitman’s Up in the Air, a stylishly shot and well-acted comedy-drama starring George Clooney, Vera Farmiga and Anna Kendrick about a travelling salesman whose way of life is threatened by the prospect of a new business model and a developing love interest. There’s another chance to watch Citizen Kane tonight and, rather wonderfully, it’s followed by documentary The Eyes of Orson Welles, Mark Cousins’ enthralling, free form look at the visual world of the actor and filmmaker. (Welles’ The Lady from Shanghai also appears in the afternoon – see Best of the Repeats.)

Henry Fonda and a pre-Psycho Anthony Perkins star as a cynical bounty hunter and a fresh-faced sheriff in The Tin Star, a film that’s considered a Western staple, albeit an underrated one. And it’s another genre classic that rounds off this week’s recommendations – the glorious When Harry Met Sally. Meg Ryan and Billy Crystal are delightful as the leads, delivering Nora Ephron’s witty dialogue with aplomb, under the sublime direction of Rob Reiner. It’s smart, cynical and sentimental all at once – a lovely, grown-up rom-com that’s been the benchmark for the genre since its release.