Duke Box #53: Our Guide to the Best Films on TV 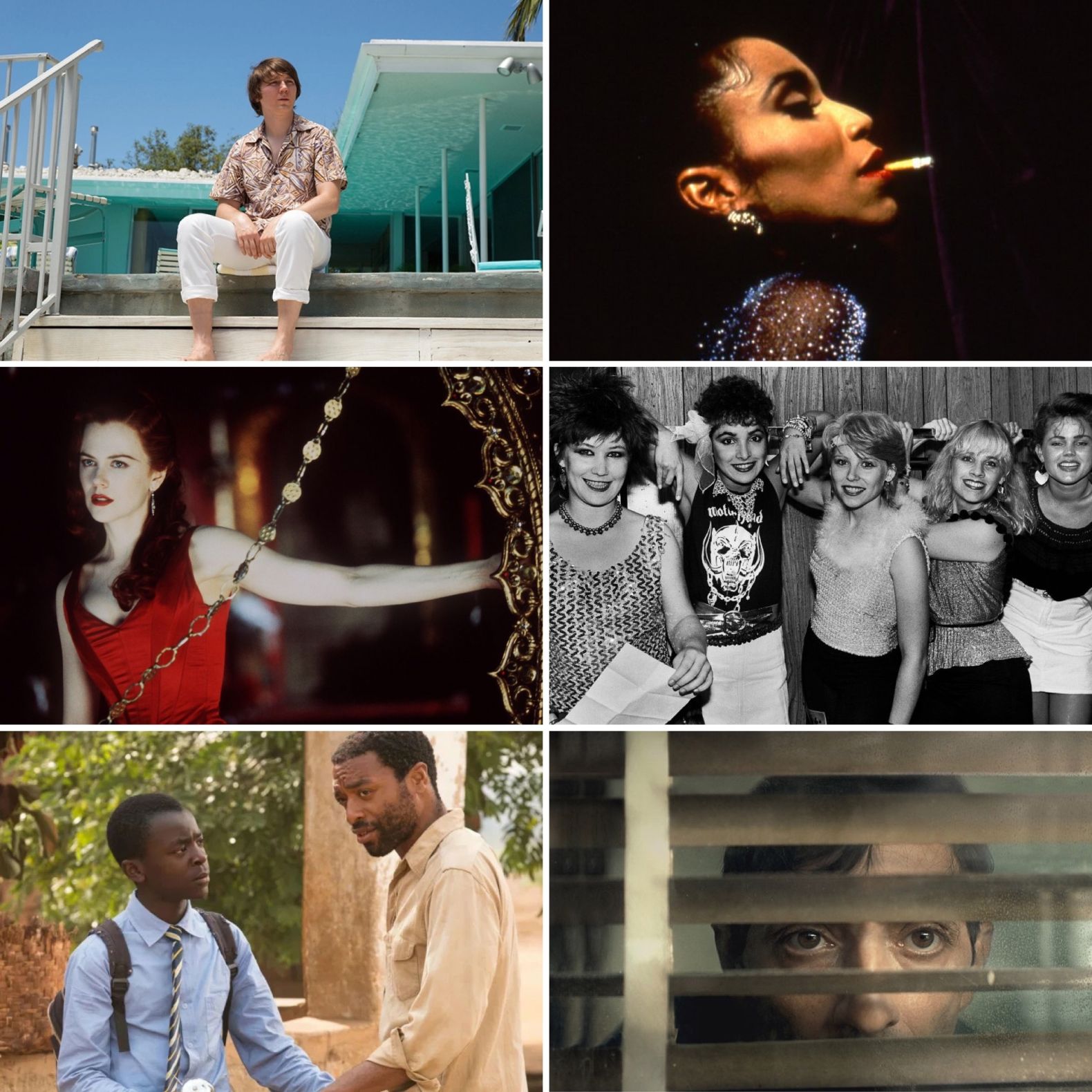 Music makes the world go round this week - from intimate documentaries and tender biopics through to punks taking on neo-nazis and Baz Luhrmann inviting you to revel in the decadence of the Moulin Rouge, it's an undercurrent that plays a huge part in a lot of picks this week...even down to the refrain of 'oh my darling, oh my darling, oh My Darling Clementine'.

Pick of the Week though goes to one of the most influential and groundbreaking documentaries - Paris Is Burning. Music and dancing are an undeniable, exuberant part of the 1980s' New York drag ball scene that the doc focuses on, but it's also a gateway in to the stories and people behind it all. If you've been enjoying Drag Race UK or It's A Sin, it's a must see.

(Please note that this list isn't exhaustive – these are just some titles that I've selected as ones to try out or revisit, hopefully at the best times. Some films may also change if channels decide to alter their listings. You can find comments on films mentioned in the 'Another chance to see' section in our previous Duke Box blogs or just head to IMDB for a quick summary!)

From the new listings to the repeats, this is a day bursting with celebrations of music. A young boy armed with a magical instrument takes on a vengeful spirit in family film Kubo and the Two Strings, another stunning animation from Laika studios (Missing Link), before a trio of classical musicals light up Saturday afternoon (glance over the ‘Another chance to see’ bit for times). Paul Dano and John Cusack star as The Beach Boys singer Brian Wilson in Love & Mercy, a powerful dramatisation of the musician and his struggles focusing on two pivotal eras in his life and career, while a Sky Arts documentary double-bill sees pioneering pop-punk act The Go-Go’s and rock-and-roll star Joan Jett and her Bad Reputation under the spotlight. It’s a busy evening of recommendations, with James Stewart reopening a murder-investigation in 1940s crime drama Call Northside 777 and Danish duo Land of Mine, a timeless and hard-hitting account of a little-known story of the aftermath of WWII, and Thomas Vinterberg’s thought-provoking drama The Commune. Perfectly timed for disorienting late-night viewing, Anna Biller’s wonderfully woozy horror-comedy The Love Witch hypnotises with a 1960s aesthetic to tell the story of a modern-day witch with a quite deadly agenda. It’s a film that pastiches and proudly endorses its inspirations, one of which surely being Hammer Horror – and there’s a bonafide original in the early hours too, with Christopher Lee donning his count’s cloak again for Dracula – Prince of Darkness.

It’s a run of recent releases that dominate the new picks for today – although it causes me great pain to not class Moulin Rouge in that same camp. Baz Luhrmann’s dazzling musical is such a spectacle, bursting with lavish design and joyfully over-the-top performances (Jim Broadbent singing Madonna, need I go on), while the Oscar-nominated Nicole Kidman and Ewan McGregor shine like sparkling diamonds as the shouldn’t-be-lovers-but-definitely-will-be at the heart of it all. It’s quite a visual pivot from John Ford’s My Darling Clementine, a breezy Western classic that sees Henry Fonda star as Wyatt Earp, readying himself for the showdown at the OK Corral. Elsewhere in the afternoon there’s tender drama Wonder, starring Jacob Tremblay as a young boy with a rare medical facial condition as he tries to settle into school. It does offer sentimentality, but not overly so, thanks to the performances of Tremblay and Julia Roberts and Owen Wilson as his parents. The evening sees actor Chiwetel Ejiofor step behind the camera as well as in front of it for his directorial debut The Boy Who Harnessed the Wind, an uplifting story about a teenage Malawian boy who comes up with an inventive solution to save his village from famine. Finally, in the early hours there’s a choice between two recent, hard-hitting pieces of European cinema: Italian crime drama Dogman, about a unassuming dog groomer who retaliates against the crime heavy who terrorises his neighborhood, and Greek film Suntan, an unflinching look at a middle-aged GP whose growing infatuation with a young tourist becomes more and more misguided.

There are two very different men-on-a-mission tales here today (three if you include the repeat of Call Northside 777). The Gunfighter sees Gregory Peck star as the titular character, riding into town with a reputation, looking for his old love and running into trouble. Documentary The Mole Agent, meanwhile, follows an 83 year old man who poses as a resident in a Chilean nursing home to see if there are any signs of abuse. Its serious subject matter is treated sensitively, resulting in a poignant, compelling and completely charming story – recently nominated for an Oscar.

There’s a double bill of British stories on Talking Pictures TV in the late morning and through lunchtime. Romantic drama The Courtneys of Curzon Street swoops through 45 years of the love between a baronet’s son and an Irish servant. The Lancashire set Whistle Down the Wind isn’t quite as grand in scope when it comes to times, but it certainly offers up big ideas, as three children (including Hayley Mills) discover a murderer (Alan Bates) taking refuge in their barn and believe him to be the second coming of Christ. Repeated here for the kinder time, Robin & Marian sees Sean Connery and Audrey Hepburn put a twist on the British legend, while there are bigger, bolder, provocative and controversial ideas and art on show in documentary Marina Abramovic: The Artist is Present, a close look at the infamous performance artist and her 2010 exhibition.

Bruising, full of adrenaline, tender and awash with great performances – I could be describing Rocky spin-off Creed or mixed martial arts drama Warrior there. Directed by Ryan Coogler (Fruitvale Station, Black Panther) the former is an award-winning, knockout addition to the hit franchise, with Michael B. Johnson stepping into the role of Apollo Creed’s son and Sylvester Stallone back as the former champ-turned-trainer Rocky Balboa. Warrior is another family affair, with Tom Hardy Hardy and Joel Edgerton facing off as estranged brothers in the same tournament and Nick Nolte on great, grizzly form as their alcoholic father. It features an excellent use of The National too, which is always a bonus. There’s more heart-racing action too in satirical slasher Scream 2, whose meta-textual pastiche of the horror sequel allows for more clever scares and laughs. Then in the early hours, there’s pioneering doc Paris is Burning – a close look at the drag ball culture of 1980s’ New York. From the influential fashion, dancing and language, as shared by some of the scene’s biggest figures, to the issues of racism, bigotry, poverty and often tragic stories, it’s a pivotal look that still packs its own punch.

George Segal and Tom Courtenay lead a strong cast in King Rat, a dramatic look at power dynamics between American and UK prisoners in a WWII POW camp, before more light-hearted fare in Penny Marshall’s lovely baseball comedy A League of Their Own. The film sees Geena Davis and Tom Hanks lead an ensemble that also features Lori Petty, Madonna and David Strathairn in a joyful reimagining of the real-life All American Girls Professional Baseball League set up during WWII. Popping up in the middle of the night, thought sure to be repeated at a nicer time elsewhere, poignant and powerful documentary Glen Campbell: I’ll Be Me follows the Wichita Lineman singer as he readies himself for a farewell tour after being diagnosed with Alzheimer’s. It’s an honest, unconventional and intimate tribute, full of other musicians but always focused on the man and his family.

Recent Golden Globe winner John Boyega stars in Kathryn Bigelow’s Detroit, a film inspired by the accounts of the 1967 Detroit riots which saw a police raid at a motel spiral into retribution. Then later in the evening there’s Green Room, a visceral and violent thriller from Blue Ruin filmmaker Jeremy Saulnier that’s an unsuspecting punk band who after an act of defiance find themselves trapped in a club against a gang of Neo-Nazis – led by Patrick Stewart on supremely chilling form. It is brutal viewing but with a wry sense of humour and a point to make.