Duke Box #20: Our Guide to the Best Films on TV 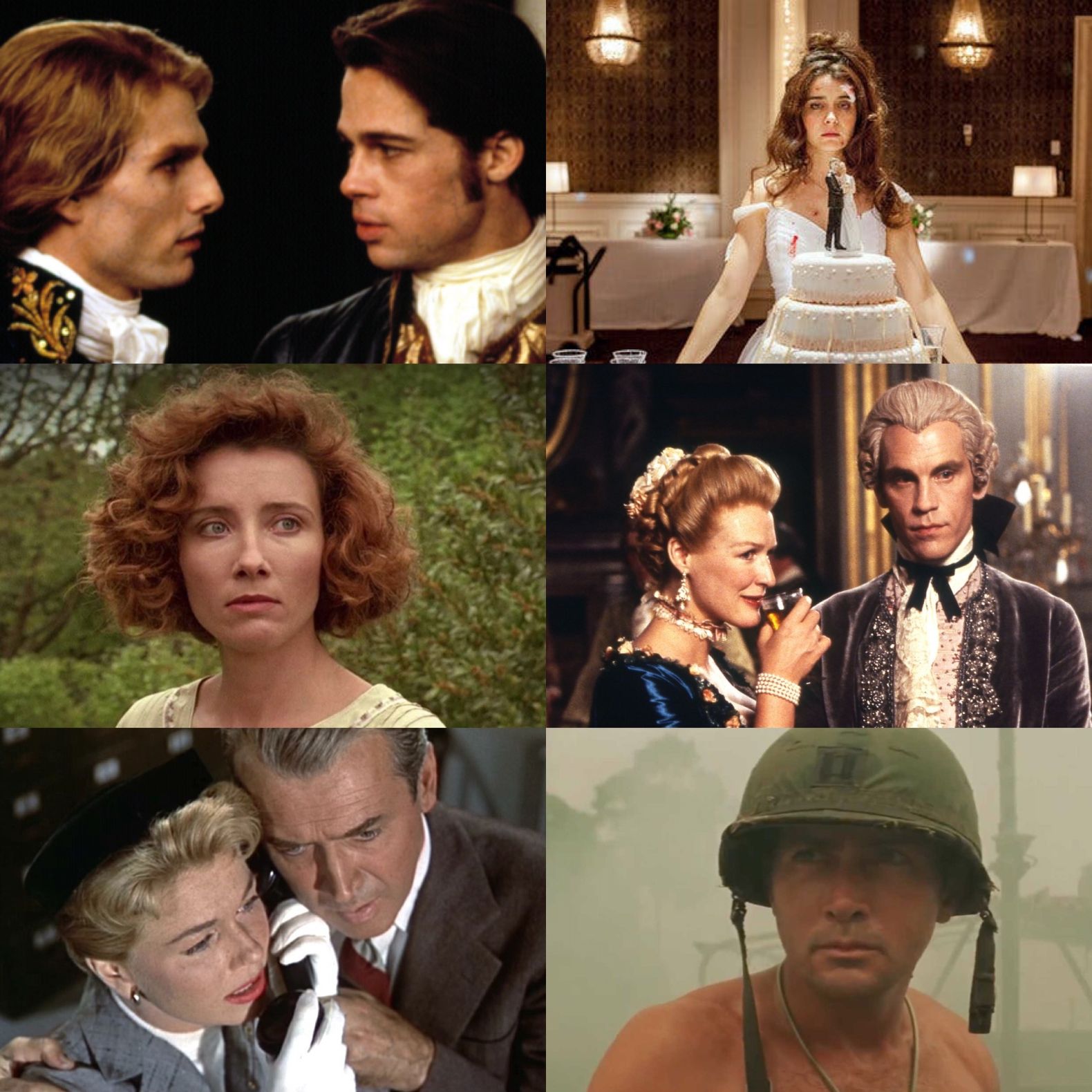 Beautiful design and cinematography, breathtaking performances and a taste for manipulation and vengeance pepper this week's highlights. Our Pick of the Week has all three: dip into the sordid world of pre-Revolution Parisian court with Dangerous Liaisons, featuring a dynamic performance from Glenn Close - how on Earth is she Oscar-less?

Between new suggestions and the ‘Another chance to see’ list, there’s a whole host of films to keep you occupied today or record and save for later – which you’ll need to do for the sheer number of films on at 9pm. Before that though, there’s the lovely, tear-jerking adaptation of E. Nesbit’s The Railway Children, starring Jenny Agutter and Bernard Cribbins. Stanley Kubrick’s gladiator epic Spartacus, starring Kirk Douglas, a cruel Laurence Olivier and an Oscar-winning Peter Ustinov, has a lovely tea-time slot, whilst there’s William Wyler’s gritty film noir The Desperate Hours on just after, starring Henry Fonda as the leader of a trio of fugitives who hold a family hostage in their bid for escape. There’s more hard-wired grime and crime at 9pm in The Friends of Eddie Coyle, which sees Robert Mitchum’s low-level Boston gangster snitch on his friends in order to keep out of jail. Also at 9pm, Barbara Stanwyck is at her sly and steely best in Forty Guns, playing a powerful, terrorising landowner whose iron fist grip on the county comes under threat from a pacifist US Marshal, Saoirse Ronan’s sixteen-year-old assassin tries to outsmart Cate Blanchett’s ruthless CIA agent in Joe Wright’s sleek and pulsating thriller Hanna (featuring an incredible soundtrack by The Chemical Brothers), and Ben Affleck’s professor finds his life turned upside down after the disappearance of his wife (Rosamund Pike, exquisite) in David Fincher’s thrilling adaptation of Gone Girl, by Gillian Flynn. A shout out too to Gone Girl’s wonderful ensemble, particularly Deadwood’s Kim Dickens and The Leftovers’ Carrie Coon. Francis Ford Coppola’s Apocalypse Now: The Final Cut removes some excess from the Redux version but adds finessed scenes, sound and editing to the theatrical release of his Vietnam War epic, inspired by Joseph Conrad’s novel Heart of Darkness, which follows Martin Sheen’s Captain on a secret mission to assassinate a renegade Colonel (Marlon Brando). Violence and vengeance seem to be the theme for these evening screenings and it carries into the Oscar- and Palme d’Or nominated Wild Tales, an Argentinian anthology film comprising of six darkly comic standalone stories about people driven to madness and enjoying losing control.

Oh, but there are some gems and big hitters available today. William Wyler’s biting drama The Little Foxes scythes class, race and turn-of-the-century America in its story of the ruthless, greedy Hubbard clan. It features Bette Davis on demolishing form, giving one of her best performances as the manipulative Regina Giddens. Steven Spielberg takes on Michel Morpurgo’s beloved WWI story War Horse, a knowingly old-fashioned and emotional story that makes for perfect Sunday afternoon viewing. Mind you, so does the wonderful Howard’s End, a beautiful adaptation from iconic producer/director duo Merchant Ivory. A story of inheritance, love affairs and class boundaries in early 20th century Britain, the film saw Emma Thompson win Best Actress for her role as Margaret Schlegel – her first Oscar win. For something quite different, George Clooney stars as an assassin hiding out in Italy in slow-paced thriller The American, from Anton Corbijn (Control). It has a curious vintage feel, taking its cue from European espionage thrillers; its pacing won’t be for everyone, but it’s beautifully shot and atmospheric. The Edge is not the ‘Alec Baldwin and Anthony Hopkins pursued by a bear’ film of the ‘90s, but instead an intimate look at the England Test cricket team from 2009 to 2013. Featuring interviews from the team and legends of the sport, it’s an obvious must for cricket fans.  Glenn Close gives a tour-de-force performance as the scheming Marquis de Merteuil in Stephen Frears and Christopher Hampton’s glorious adaptation of Dangerous Liaisons, which sees a manipulative widow make a bet with her ex-lover (John Malkovich) about whether he can seduce a chaste, married woman of the court (Michelle Pfieffer). It’s deliciously decadent and devious. Finally, there’s French-Belgian horror Raw, a film that manages to combine with the brutal and tough-to-watch with stunning symbolism. Following a young vegetarian veterinary student who’s horrified to find herself developing a craving for human flesh, you will need a strong stomach– but its underlying themes of female sexuality, desperation to fit and breaking free from family strongholds make it a powerful watch, nonetheless.

James Stewart and Doris Day star as a couple who find themselves unwittingly caught in an assassination plot after their son is kidnapped, in Alfred Hitchcock’s The Man Who Knew Too Much. And did you know that this – a Hitchcock suspense film – is where Doris Day’s infamous ‘Que Sera Sera’ comes from? It’s used magnificently and unsurprisingly went on to win Best Original Song at the Academy Awards. There’s more international subterfuge in Spy – albeit in a more comic sense, Melissa McCarthy plays a desk-bound CIA analyst who goes undercover to prevent global disaster. McCarthy’s great and the whole ensemble is clearly relishing subverting genre tropes, especially Jason Statham. Meanwhile, British classic Billy Liar sees a young Tom Courtenay star as a lazy, immature clerk who frequently takes flights of fancy to an imaginary world to escape the realities of life. Julie Christie co-stars as Liz, the one woman who seems capable of bringing Billy back down to earth.

It’s all about the central performance in Roman J. Israel, Esq. Denzel Washington won his eighth acting Oscar nomination for his bravura role as an idealistic defense attorney caught in a tumultuous series of events in this crime-drama from Dan Gilroy, the writer and director of Nightcrawler. Then, in the early hours of the morning, there’s an early showcase for 1917 and Pride actor George McKay in For Those in Peril, about the sole survivor of a mysterious fishing accident who’s blamed for the tragedy. The film co-stars the always wonderful Kate Dickie and Michael Smiley.

More a day for catching up with films than anything else, but The Dressmaker and A Touch of Sin are curious films to try out, nevertheless. The former mixes up comedy, romance, drama, melodrama and revenge in a way that you’ll either love or loathe, but there’s no denying that Kate Winslet and Judy Davis are sublime on screen and the design of the film is fittingly stunning. The second anthology film of the week, Chinese film A Touch of Sin, like Wild Tales, tells separate stories of random acts of violence, committed in response to social circumstances – albeit in a more bleak and brutal way. There are some almost balletic sequences of action, and it’s a must for fans of martial arts and Chinese wuxia stories.

Your kids should have fun with animation Megamind, which puts a twist on the superhero genre by following a villain who must search for new meaning in life after actually defeating his arch-nemesis, Metro Man. There are tender and sweet-heartedly funny considerations of family, grief and adjusting to the realities of life in indies What We Did on our Holiday and Me and Earl and the Dying Girl. The former sees David Tennant and Rosamund Pike as a couple trying to convince their kids to keep their separation a secret as they visit their Grandad, played by Billy Connolly, whilst the latter follows teen Greg, who’s penchant for escaping life by making parodies of classic films is altered by his blossoming friendship with Rachel, a classmate recently diagnosed with cancer.

The week rounds out with a good number of films to catch up on during the day, plus a pretty eclectic selection of new films to check out in the evening. On BBC4, documentary Everything: The Real Thing Story takes a close look at the legacy of one of Britain’s finest and most successful soul groups, Liverpool’s own The Real Thing. Following last week’s introduction to Miss Jones, hapless Bridget’s love life takes more twists and turns in Bridget Jones’s Diary: The Edge of Reason, with Renee Zellweger returning alongside Colin Firth and Hugh Grant. Brad Pitt sits down for an Interview with the Vampire, Neil Jordan’s adaptation of Anne Rice’s beloved novel about a man who’s transformed into a vampire by the charming Lestat (played by Tom Cruise, a controversial casting decision at the time). The production design is simply stunning. Elsewhere, on Film4, there’s the 1980s’ set Everybody Wants Some!!, which saw Richard Linklater (Before Sunrise, Boyhood) return to college teen drama with this ‘sequel in spirit’ to Dazed & Confused to follow a group of baseball players as they learn to deal with being unsupervised adults. The soundtrack will carry you into the weekend and throughout the summer.