Listen Up For Port Stories 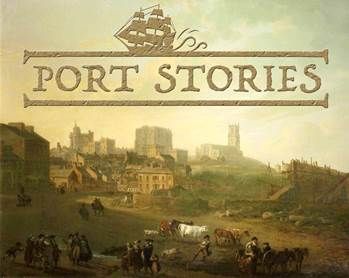 Four unique audio dramas have been produced using the talents of celebrated historians and awardwinning writers.

The dramas are embedded at historic sites mainly around St George’s Quay and Castle Park in Lancaster and from December 2, a map will be available to download from www.dukes-lancaster.org/portstories to experience a walking tour with a difference.

Although it’s recommended to enjoy these dramas as a journey around Lancaster’s heritage sites, they can also be listened to at home, streamed from our website.

Julie performs in a drama called Black Mary based on a local legend at the time of Lancaster’s slave trade. It’s about a family who apparently kept the hand of one of their slaves to pass down through the generations.

The slave trade is also the background to A History of Violence(age guidance 14 plus). This drama, also by James Harker, is best heard at the Slavery Memorial on St George’s Quay and explains how slavery continued to have a lasting impact on British society long after it was abolished.

The final two audio dramas are 1698 Parts 1 & 2 by May Sumbwanyambe which are based on the autobiography of well known Lancastrian Quaker William Stout who went from shopkeeping to international trade. David Crellin, who recently appeared in The Dukes production of The Ockerbys on Ice, plays Stout.

The Port Stories audio dramas will be officially launched at 1pm on December 2 in the Print Room Café and Bar at The Storey where visitors can find out more and get instructions on how to take part. At 6pm, hear first-hand from the creative team and historians at the talkback event in The Storey Lecture Theatre.

Port Stories has involved professional historians co-ordinated by Sam Riches of the Regional Heritage Centre and community participants, including some from refugee and asylum-seeking backgrounds.

Local schools are also creating learning resources for Key Stage 2 and 3 and all material will be deposited with Lancashire Archives.

The project also aims to increase awareness of the importance of Lancaster’s built heritage and museum collections at a time when the county’s museums are under threat.

The Port Stories community programme runs until March 2017. If you would like to get involved, email portstories.dukes@gmail.com